FIGURE 1: The Trade Made Possible by the Federal Reserve 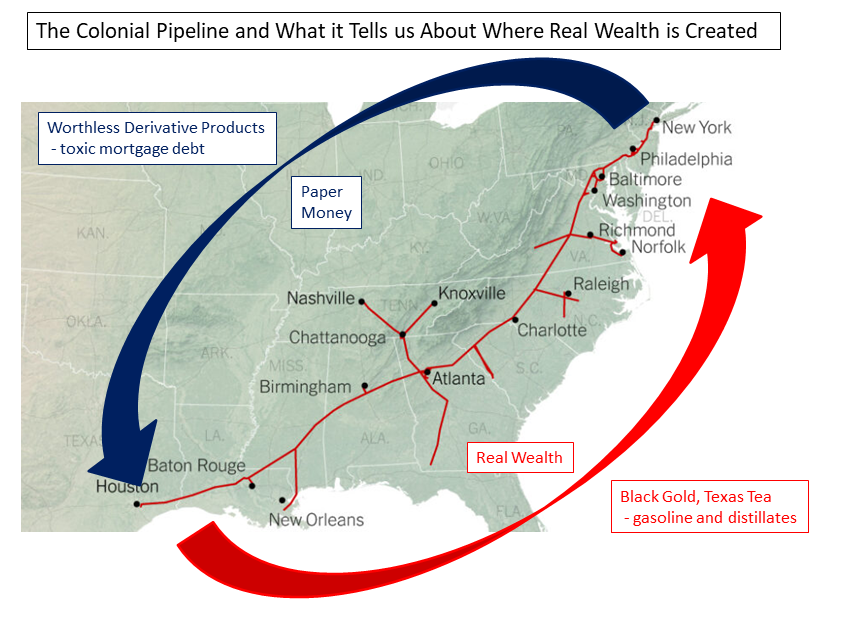 MONEY:
One of the seminal achievements in human history was the widespread use of money.  Transitioning from a system of barter - and the enormous transaction costs associated with barter - allowed for specialization, the division of labor and an explosion in productivity.  (1)  The reason the barter system could be supplanted was, of course, the rise of a common unit of exchange that everyone was willing to accept.  That common unit of exchange was precious metals.  The value of a currency wasn't determined by a central bank or interest rates.  A currency's value was determined by one factor - how much precious metal it was worth.  (2)

The use of money and the increased specialization of labor should not obscure the fact that as a member of an economy today, an individual is still trading their production for someone else's production.  A 17th century German proverb held, "The world is like a shop stocked full of goods.  They are on sale for work - toil may buy them."  All the beneficial aspects of money - and they are considerable - hinge on the money being an honest store of value and the monetary system not favoring one type of producer at the expense of others.  As expressed by Wilhelm Ropke, the most important pedal in the creation of money isn't the accelerator; its the brake;
"If in the production of goods the most important pedal is the accelerator, in the production of money it is the brake.  To insure that this brake works automatically and independently of the whims of government and the pressure of parties and groups seeking "easy money," has been one of the main functions of the gold standard.  That the liberal should prefer the automatic brake of gold to the whims of government in its role of trustee of a managed currency is understandable."  (3)

Of course there is no longer any automatic brake on the creation of money, but what is the practical ramification of this?  Does it really matter?  Some insight into the answer to these questions can be obtained by contrasting AIG's business in mortgage CDS with the Colonial Pipeline.

As everyone now knows, AIG's business in mortgage CDS blew up in its face. (4)  While numerous industrial companies have gone bankrupt, for some reason the Federal Reserve Bank of NY judged AIG's CDS business of national importance.  Even though AIG's counterparties only had a few hundred million dollars worth of capital tied up in their mortgage CDS trade - it was AIG that was exposed to enormous amounts of leverage and tens of billions in losses - the NY Fed's Tim Geithner decided to bailout these counterparties.  Geithner - in complete secrecy and at his discretion - paid them at 'par.'  There have been a lot of crocodile tears sheds over the bailout of AIG, but this is a smokescreen.  The AIG bailout had nothing to do with AIG, and everything to do with paying AIG's counterparites at par.  These counterparties and the amount they received from the AIG bailout is listed below.

COLONIAL PIPELINE:
The Colonial Pipeline is comprised of two lines - one 40-in in diameter and the other 36-in in diameter - and runs from the oil producing regions of Texas and Louisiana, through the southeast, and to the large eastern cities of Washington DC, Baltimore, Philadelphia and New York City.  (See Figure 1) One line is dedicated to transporting gasoline and the other line is dedicated to moving distillates like jet fuel and diesel.  The liquid products move through the pipeline at just 4-miles per hour (6-ft/sec).  A gallon of gasoline from Houston takes over two weeks to get to New York!

Some perspective on the size of the pipeline's operation can be obtained with some simple calculations.  For discussion purposes, lets say the 40-in line is used to move gasoline and the 36-in line is used to move distillates.  At an average velocity of 6-fts per second, the 40-in line transports about 34-million gallons of gasoline per day and the 36-in line 27-million gallons of distillates per day.  If we assume the liquid products are worth $2 per gallon and the pipeline operates for 350-days each year, then the total dollar amount of liquid petroleum products moved by the pipeline each year is just under $43-billion.  If the pipeline charges 5% against the volume of the product being shipped, then the pipeline has an annual revenue of about $2-billion per year.  (5)

COMPARISON: AIG vs. the COLONIAL PIPELINE
The enormous flaws in today's monetary system are exposed by by contrasting the bailouts lavished on AIG's counterparties with Colonial Pipeline's annual revenue.  The US would have been much better off if the entire market for mortgage derivatives never existed.  It was mortgage derivatives that allowed what would have been a collapse in the housing market to metastasize into a world altering economic calamity.  Not only was the trade in mortgage CDS completely unnecessary in any positive sense, it became destructive to the country's capital structure and wealth producing capacity.  The parasitic nature of Wall Street's mortgage CDS trade notwithstanding, the Fed lavished tens of billions of dollars on the companies taking part in it.

This transparently nonsensical result is not a natural consequence of capitalism, free market or the ebb and flow of supply and demand.  Instead, it is an obvious manifestation of the enormous flaws in today's Fed dominated monetary system and the subsequent financialization of the economy  Because of the Federal Reserve's stewardship of the monetary system, worthless credit derivatives can be traded for valuable transportation fuels.  (See Figure 1)

ENDNOTES:
1.  In a barter system, acquiring the goods you wanted required two steps; (1) determining who had the good you wanted, and, (2) finding out which of these people were willing to trade with you based on what you had to offer them.

2.  When President Nixon closed the gold window in 1971, central banks - not US citizens by the way - could exchange $35 for one ounce of gold.  For some perspective on this, gold closed at ~$1880 per ounce on Friday, a loss in purchasing value of 8.29% for fifty straight years.  Thank your local central banker!

5.  The Colonial Pipeline is privately held and I don't believe they publish earning reports.