When reviewing all the things the Federal Reserve has gotten wrong over the years it is easy to focus on interest rates alone.  After all, it is by manipulating interest rates that the Fed attempts to direct the US economy to some desired outcome.  However, in many cases the Fed raising rates is little match for the animal spirits the Fed has already let loose.  This mechanism of rising rates failing to quell a Fed fueled mania can best be demonstrated by reviewing two examples from history; 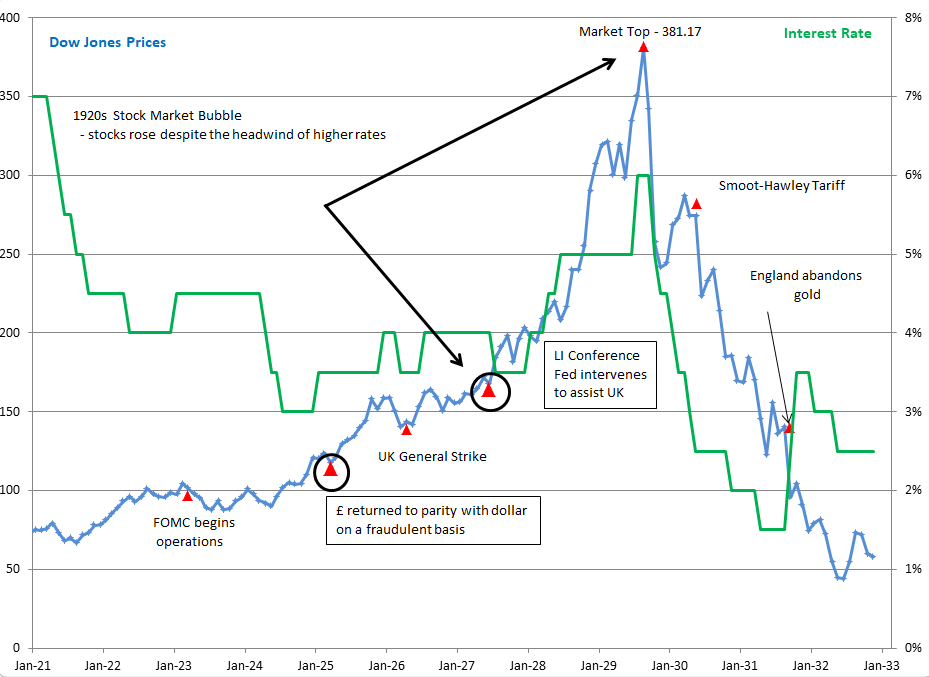 World War I was a colossal disaster, and set the world back in every way imaginable.  The biggest strategic blunder the US ever made was to violate her longstanding neutrality and intervene on behalf of the Allies.  On an economic front, this intervention was characterized by US banks loaning huge amounts money to Allied governments so these governments could purchase huge volumes of weapons from American companies.  There is no quicker way to bankrupt a country than to borrow in a foreign currency to purchase weapons.  The experience of the UK, France and Russia in 1918 was little different than that of Iraq in 1988. (1)

By the 1920s, the UK economy was in shambles.  The UK had greatly increased its currency in circulation to pay for the war, but all this spending didn't increase the UK's productive capacity.  Indeed, in February 1920, well after Armistice Day, the pound still traded at $3.18 versus its pre-war parity of $4.88, a fall of 35%.  There were two legitimate courses of action for the UK at this point - accept the pound's loss of value or raise interest rates to soak up all the extra pounds that had been created during the war.  Both involved hard choices and honesty - two things central bankers and politicians are basically incapable of.

Instead of these two legitimate courses of action, Montagu Norman, the head of the Bank of England, came up with a third idea.  Norman's idea was to have the US cut rates, and this would then eliminate the need for the UK to raise rates.  Norman's counterpart at the Federal Reserve Bank of New York, Benjamin Strong, agreed to work with Norman on this plan, and began goosing credit markets in the US to advance British interests.  This was always going to be a difficult operation but two events occurred to take this already difficult plan deep into the realms of impossibility, See Figure 1;

It was at this point that Benjamin Strong then took the extraordinary action of calling a meeting of the world's central bankers.  The meeting was held in July 1927 on Long Island.  The meeting had a single purpose - to coordinate a world-wide policy of "loose money" to advance the interests of England.  The leaders of the central banks in France and Germany balked at the proposal.   Strong dismissed the concerns expressed by France and Germany as well as the concerns expressed by many in the US banking establishment with the retort, that the interest rate cuts he had in mind would amount to little more than "a little coup de whiskey for the stock exchange."  (2)

Of course, the animal spirits Strong thought would only run a little faster, ran completely wild.  Strong became seriously ill and died in October 1928 at just 55-years old.  In his absence, the Fed first tried a policy of 'moral suasion' to have banks stop loaning money for stock speculation .  When that failed, they raised interest rates to reign in the stock market that was obviously spiraling completely out of control.  It was to little avail and stock prices loosened themselves from any sort of rational basis.  At the valuations prevailing in October 1929, once selling began in earnest, the selling would soon feed on itself and prices would tumble - the market merely floated on a cushion of air.  The same animal spirits that saw stocks only going up would soon become consumed with man's most basic emotion - fear; and that fear would send prices tumbling. 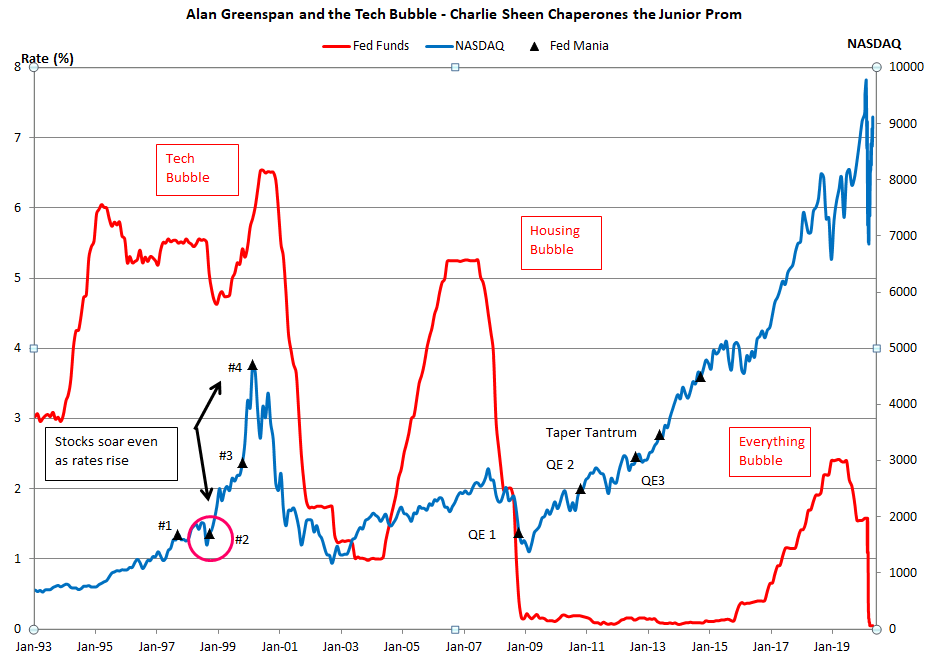 For obvious reasons, Ben Strong went to great lengths to keep his market manipulations to benefit the UK a secret.  Of course, market manipulations of that type can never be kept secret, at least not traders.  Astute observers knew the UK reestablishing the pre-war parity of the pound in April 1925 had no basis in economic reality and required active participation by the central banks of England and the US to sustain the chimera.  In sharp contrast, Alan Greenspan regularly breathlessly championed all the (supposedly) unprecedented changes that computer technologies were producing and how these changes justified rising stock prices.

Two examples of this market cheerleading are provided by Items #1 and #4 in Figure 2;

In addition to his outright market cheerleading, Greenspan performed two other actions that greatly emboldened the market's animal spirits.  These are items #2 and #3 in Figure 2.

At the time of the surprise rate cut the NASDAQ was at 1611.  In a little over a year, November 1999, the NASDAQ soared to 2967, a gain of 84%.  In a final speculative blow-off the NASDAQ - doubtless fueled by the passage of the Citigroup Relief Act -  reached 5000 in March of 2000, a 70% rise in just the four months since November, or over 210% since the surprise rate cut sixteen-months earlier in October 1998.  The enormous move came with a considerable headwind provided by raising rates.  Exactly as in the 1920s bubble, the rising rates of the 1990s proved no match for the animal spirits that Greenspan greatly encouraged.

Concluding Remarks:
As seen in the chart below, Figure 3, the stock market climax following the October 1998 surprise rate cut was a case of history repeating itself, and eerily similar to the stock market blow-off that followed the July 1927 Long Island conference of central bankers.  The chart plots the 1920’s stock bubble for the period January 1920 – September 1933 and the tech bubble for the time period from January 1993 – March 2003.  The data in the chart is “normalized.”  Normalization is a technique commonly used in statistics when evaluating data measured over different durations of time that is also measured using different scales of magnitude.

As discussed here, both the 1920s and Tech Stock bubbles saw their largest gains when interest rates were rising.  Fed apologists routinely cite the 1920s and 1990s stock bubbles as proof the Fed can't be behind asset bubbles.  As demonstrated here, what really set markets soaring were the animal spirits that the Fed - in the persons of Ben Strong and Alan Greenspan - encouraged and emboldened.  Once these animal spirits had been released by the Fed, rising rates weren't going to slow them down.  The only thing that would stop these markets from marching higher would be these animal spirits simply exhausting themselves.  Once the market had exhausted itself, there was no remaining force large enough to keep the market from falling once the selling began in earnest.

Many argue that today's markets - courtesy of three rounds of QE and the taper tantrum, see Figure 2, are eerily similar to the 1920s and 1990s stock bubbles. 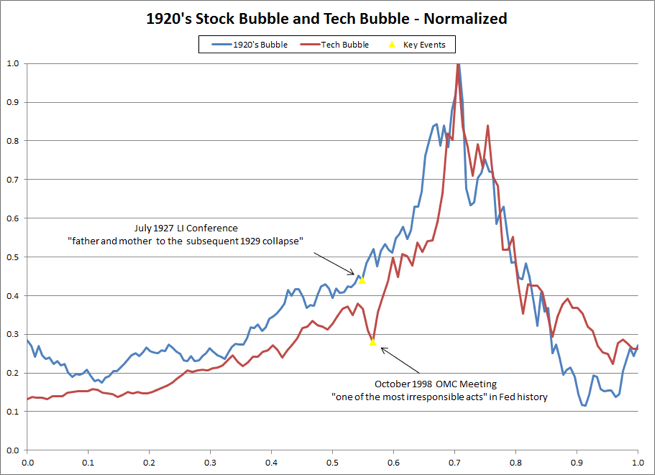 1.  http://www.the92ers.com/blog/cia-federal-reserves-equal-capitalizing-chaos-it-creates
The prime motivation for Saddam Hussein's invasion of Kuwait was economic.  After nearly eight-years of war with Iran, his country was completely impoverished.  (4)  Iraq had borrowed heavily to finance its war with Iran, and among the countries it had borrowed from was Kuwait.  Saddam argued he was doing the Arab gulf states a great favor by fighting Iran, and these gulf states should then forgive Iraq's debts.  When Kuwait insisted that Iraq make good on its war debts, Iraq invaded Kuwait.  With this being the case, there is a direct causal chain between the 1953 coup, the 9/11 attacks, and the subsequent invasions of Iraq and Afghanistan.

5.  William A. Fleckenstein with Frederick Sheehan, Greenspan's Bubbles - The Age of Ignorance at the Federal Reserve, McGraw-Hill, New York, 2008, p. 51