In the United States, enormous amounts of electrical power are provided at very little cost by an increasingly smaller number of people.  Some perspective on this 'enormous amount of power' can be gleaned by examining the per capita consumption of electricity in the US; 1.45-kilowatts per hour, every hour of every day. (1) For some perspective on this figure, a top cyclist is able to generate about 450-watts of power for a few hours.  So the equivalent work produced by more than three of these cyclists is going on around each American every hour of every day in the form of electrical energy.  In addition, the cost of this enormous amount of electrical work is staggeringly inexpensive.  A kilowatt-hour of energy - even after accounting for the transmission costs - costs around 10-cents in large parts of the country.  Make no mistake about it, the biggest bang anyone gets for their buck, is the money they use to purchase electricity.

Regrettably - and as amply demonstrated by the Green New Deal - the generation of electricity is a victim of its own success.  Because the cost associated with electrical generation is so low relative to the enormous benefit derived from it, and the production is so reliable, all sorts of people who know nothing about mechanical or electrical engineering are emboldened to micromanage how all this energy is produced.  Of course, at the top of the list of people prone to this sort of fatal meddling are politicians.  Behind them, there is an entire army of useful idiots masquerading as journalists cheering them on.

For example, in 2018, a writer for Bloomberg, Brian Eckhouse, celebrated that more people were employed in the solar industry than the coal, nuclear and wind industries combined!  (2)  To keep things simple, lets just compare the ultimate four letter word when it comes to electricity, coal, with solar.  In 2018, coal generated 11-times more electricity than solar but used half as many people to do it.  (3)  That makes coal 22-times more efficient than solar when it comes to the most important arbiter of them all - human effort.  A writer for Bloomberg - a company who charges people tens of thousands of dollars each month for access to information - actually claims a benefit of solar energy is how inefficient it is compared to other forms of electricity generation.  Has anyone told this author that employment in the transportation industry would soar if we insist on carbon-free trucking?  Think of all the people who could make a living as beasts of burden hauling all sorts of goods - strapped to their back - across the country!

This same confusion of work with progress is a significant motivation behind the goal of 'decarbonizing' the electricity grid by 2035.  Production of electricity has never been as efficient or as environmentally benign as it is now.  By any metric, the environment is much cleaner today than it was in the 1970s.  A coal plant that has been retrofitted with flue gas desulfurization (FGD) and selective catalytic reduction  (SCR) hardware, will have its emissions of sulfur-dioxide (SOx) and nitrogen-oxide (NOx) reduced by 90%.  Advanced combined-cycle gas turbine plants are able to convert more than 60% of the thermal energy in natural gas into electricity - a huge improvement from the machines of even ten years ago.  All this progress notwithstanding, the people behind the Green New Deal see great benefit in smashing this enormously productive infrastructure into bits, and replacing it with a system that won't be able to match the efficiency or reliability of today's system.

What follows below, is an introduction into the other-worldly aspects behind the economics of the Green New Deal.  As the Green New Deal envisions a carbon free grid by 2035, all the electricity generated by coal and natural gas must be replaced by 'carbon free' sources.  Because nuclear plants are closing down faster than they are being built, and no large hydro projects are in the offing, all this power has to be produced by wind and solar.  The analysis below is based on a few easily available facts and approximations.  These facts and approximations are;

With these figures established, all it takes is some algebra to develop an understanding of what sort of costs are involved with the massive undertaking of replacing coal and gas generated electricity with solar and wind.  (the variable x is the percentage of all this new renewable power that is generated with solar power)  The results of this analysis are plotted in Figure 1. 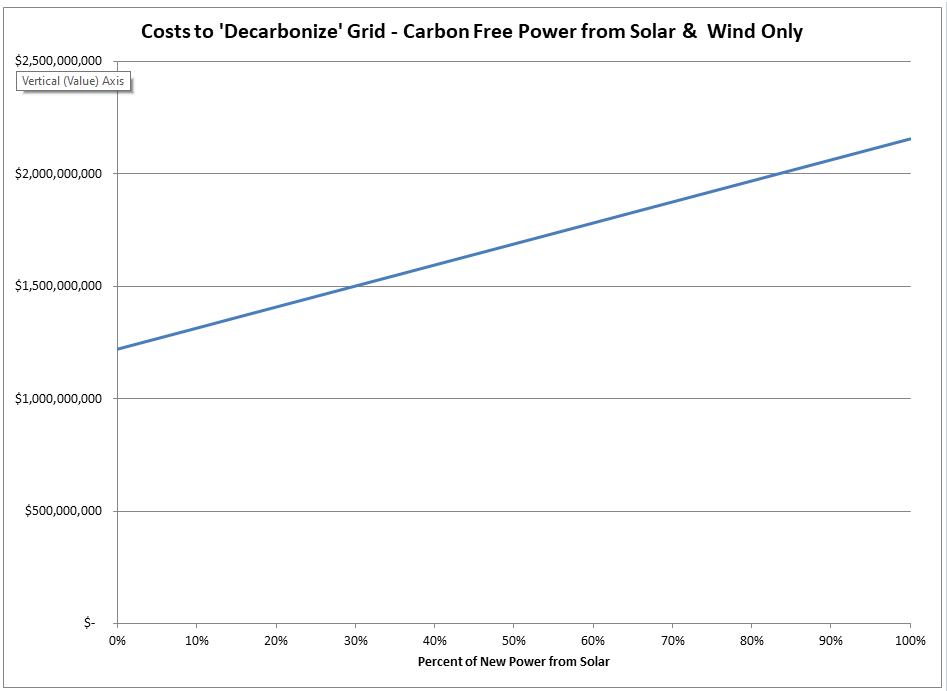 From this simple analysis, the costs of simply building the power plants is between $1.5 and $2-trillion, and this assumes that this massive effort wouldn't lead to higher prices - which would be a first in the engineering and construction industry.  (To be honest, the figures don't carry the same gravity they once did.  It was only a few years ago that $2-trillion was a lot of money.)  Of course, these costs are just the tip of the iceberg.  Enormous amounts of investments would have to be made in new transmission lines.  Currently, renewables hold a privileged place among sources of electricity.  As a result of incentives - 'production tax credits' - renewables generate as much power as they can; its the other power sources that have to ramp up and down as the renewable energy production falls and rises.  This is a luxury renewables won't have when the two largest sources of baseloaded power - coal and gas - cease to exist.  Literally tens of millions of batteries would be required to store all the new renewable energy.

The production of all these batteries will have a major environmental impact - not just their initial production but what to do with them when their life has expired.  In addition, huge amounts of land would have to be turned over to the production of electricity - solar and wind require enormous amounts of space to generate electricity.  Roads would have to be built to haul all the workers and material needed to build all the solar cells and windmills.  It is no exaggeration to say that much of the country would have to be transformed - and not in a good way - as part of this massive build-out of renewable power.

The simple fact of the matter is the market - provided it is allowed to work - is the best arbiter of how electricity should be generated.  Abandoning this task to central planners and their media cheerleaders is a policy fraught with enormous risk.