There are many examples of the complete dearth of creative talent in Hollywood.  Perhaps the best example is Hollywood's obvious reliance on movie "franchises" and characters developed decades ago.  Just this past week, the number one movie at the box office was the latest iteration of the "Halloween" series of horror movies.  These movies revolve around the terrifyingly enigmatic masked killer, Michael Myers.  The first Halloween movie came out in 1978 - forty years ago - and the creative "geniuses" in Hollywood still haven't come up with a concept remotely as good.  If they were smart - which they aren't - Hollywood writers would have looked to the political arena and easily found someone far more terrifying than Michael Myers - NY Governor Andrew Cuomo.

Andrew Cuomo was Bill Clinton's second housing secretary.  (The Harvard educated Henry Cisneros was the first.)  As will be described below, as housing secretary Andrew Cuomo pressed the self-destruct button on the US economy.  He did so, by radically altering the mortgage lending standards used by the two enormous government sponsored enterprises, (GSEs), Fannie Mae and Freddie Mac.  Cuomo made it far easier to obtain mortgages from the GSEs. These lower lending standards then wreaked enormous economic havoc when so many of the mortgages issued under these new lending standards went bad. 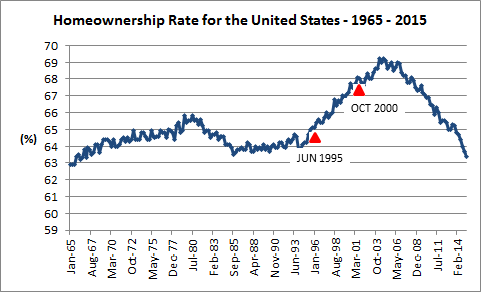 Andrew Cuomo - who had no experience as a banker or in the mortgage industry generally - would cast these time-tested lending standards aside.  On October 31, 2000 Andrew Cuomo declared that fully 50% of GSE mortgages must go to low and moderate income borrowers.  Michael Myers only wreaked havoc on the unsuspecting town of Haddonfield, Illinois; Andrew Cuomo would unleash economic havoc on every city and town in the United States.

Here is Andrew Cuomo - again, a total neophyte in the mortgage market - cavalierly casting aside decades of rule based lending, and exposing his total ignorance of the enormous credit risks his policy was exposing the GSEs to;
"Even with a record homeownership rate of 67.7%, there is still much more to be done.  These new regulations (requiring the GSEs to issue 50% of their mortgages to low and moderate income borrowers - author) will greatly enhance access to affordable housing for minorities, urban residents, new immigrants and others left behind, giving millions of families the opportunity to buy homes or to move into apartments with rents they can afford.  We acknowledge and appreciate that Fannie Mae and Freddie Mac have accepted this challenge." (3)

Some evidence of the huge default rates produced by Andrew Cuomo's edict of October 31, 2000 can be seen by the events of September 05, 2008.  On that day, Fannie and Freddie were effectively declared bankrupt - they were actually placed into something called "conservatorship" - and each received $100-billion in capital from Treasury to make good all their enormous losses.  Later, on December 24, 2009 - a date obviously chosen to reduce public scrutiny - additional capital injections were authorized.  In other words, the original $200-billion wasn't enough!

The direct relationship between Andrew Cuomo's ignorance as HUD secretary and the enormous GSE lending losses spawned by this ignorance has never been a topic for the mainstream media in this country.  The fact that this relationship has not been discussed does not make this relationship any less valid.  Andrew Cuomo - who will likely be among the leading candidates for President in 2020 - played an enormous role in the housing crisis, and his actions on Halloween 2000 prove this conclusively.    By this standard, Andrew Cuomo's actions on October 31, 2000 are far more terrifying than anything pulled off on Halloween by Michael Myers.

PPS - For additional perspective on the role the affordable housing mandate played in the financial crisis see the Dunce biographies of Henry Cisneros (#11) and Shaun Donovan(#18).  For an example of a Harvard PhD in economics confusing all this wild, speculative lending of the housing bubble era with a productive economy, see Austan Goolsbee (#25).

(1) The Housing Bubble and Financial Crisis as Central Planning by Government and the Promulgation of "Fake News" by Legacy Media - A Tale in Three Parts (August, 26, 2018)  http://www.the92ers.com/blog/housing-bubble-and-financial-crisis-central-planning-government-and-promulgation-fake-news