DISCUSSION:
There is a scene in the movie "Casino" where Joe Pesci's character - who is based on real-life gangster Tony Spilotro of the Chicago Outfit - confronts a banker.  This exchange is useful in understanding the role pandering politicians have played in undermining the electricity market; only the most important market in any modern economy.  In this exchange, imagine the electricity market is "Nicky" and the politicians are "Mr. Clark." 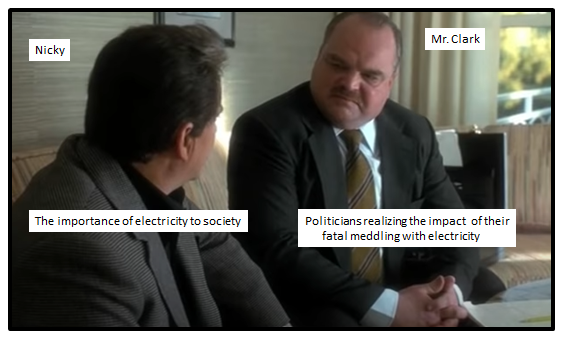 Nicky: "Hey, Mr. Clark.  How ya doing?  I've been trying to reach you.  You're tougher to get than the president."
Mr. Clark: "Well, I've been busy."
Nicky: "Yeah.  At least you could do is return my phone calls."
Mr. Clark: "Listen, Nicky.  We talked about this and I explained there was a possibility that you might have to take some kind of loss."
Nicky: (unconvinced) "Yeah.  I think I want all my money back."
Mr. Clark: (with nervous laughter) "What are you going to do? Strong-arm me?"
Nicky: "You know, I think you got the wrong impression about me.  I think in all fairness, I should explain to you exactly what it is I do.  For instance, tomorrow morning, I'll get up nice and early, take a walk down over to the bank, walk in, and see ya.  And, if you don't have my money for me, (Pause, with a red-faced Mr. Clark looking at Nicky, with his lips quivering and sweat pouring off his face), I'll crack your f***ing head wide open in front of everyone at the bank."

In the US and elsewhere, electricity was always available.  "Brownouts," where grid operators shut-off electricity to a portion of the grid because not enough electricity is available, were virtually unheard of.  Now, hardly a day goes by without some mention of users being threatened by brownouts.  What happened?

The answer, of course, is quite simple.  Today's chaos in the electricity market is a direct consequence of it joining the housing and student loan markets as the markets subjected to the most government intervention. Perspective on the enormous risk to society latent in the political interference in the electricity market can be obtained by determining US per capita electricity consumption.  Table 1 below shows total US electricity generation for the years 2000 - 2021.  Note that for 2021, the two largest sources of electricity are natural gas and coal respectively.  They provide roughly 60% of US electricity.

Table 1 accounts for electricity generation in terms of MW-hr (megawatt-hour), while consumers are billed in terms of kw-hr (kilowatt-hour); there are 1000-kw-hr in 1-MW-hr.   So, all we need to do to evaluate US per capita electricity consumption is multiply the total generation figure in Table 1 by 1000, and divide it by the number of hours in a year and number of people in the US; (estimated to be 325-milliion people).

One of the problems with electricity is it is hard to visualize or appreciate how much energy is involved when electricity is measured in terms of volts, amperes and kilowatt-hours.  What does US per capita consumption of 1.5-kw-hr per hour mean?  A physical meaning to this enormous amount of electrical energy - and it is enormous - will be obtained by comparing this figure with how much energy a professional cyclist generates in one hour of peak activity.  At the peak of his - albeit EPO and drug-fueled - dominance, Lance Armstrong could sustain an output of 425-watts for one-hour.  So, US per capita consumption of electricity is the physical equivalent of the output of 3.5 'Lance Armstrongs,' every hour of every day!

To add further perspective to this, if we say average electricity cost in the US is 15-cents per kw-hr, then for less than 25-cents per hour, the average US citizen has 3.5 'Lance Armstrongs' working 24-hours a day, 365-days per year to provide them all electricity they use.  It's the best money the average person spends!

CONCLUDING REMARKS:
Not only are nearly all physical goods and the much vaunted "digital infrastructure" dependent on electricity, so are almost all the modern conveniences people take for granted.  From getting clean water out of a faucet to riding an elevator to the top floor of a building, without electricity our modern society would cease to exist.   Perspective on this truism is demonstrated by the enormous amount of electricity the average US citizen consumes.  It's a volume of energy that is equal to 3.5 'Lance Armstrong's' pedaling at peak power every hour of every day.  It's a volume of energy that few politicians have any appreciation for.  Now that electricity is starting to get scarce and the prospects for brownouts start to increase, a lot of these politicians should start to look like Mr. Clark.