Although it is rarely discussed today, August 15, 1971 was the date America came to her moral, cultural and economic crossroads.  Unfortunately - and with enormous negative consequences for the future - President Nixon, with the full-throated endorsement of the political and media establishments , took America down the wrong path. (1)  He closed the "gold window" that was agreed upon at Bretton Woods in 1944 when World War II still raging.  When the gold window was closed, the last tenuous link the dollar had to gold was irrevocably severed.

With the dollar unbridled from anything that could give it intrinsic value, a future of inflation, currency debasement, moral decay and wealth concentration became inevitable.  No longer would banks serve industry in industry's effort to increase its wealth producing capacity.  Instead - with the Fed's now unrestricted ability to create banking reserves out of thin air - banks could prosper when the economy as a whole suffered.  In short, the "financialization" of the US economy began with Nixon closing the gold window.  Nixon considered closing the gold window to be a "temporary" expedient.  In spite of the "temporary" nature of Nixon's edict, it remains in effect nearly 50-years later.  Nixon and others believed closing the gold window would "stabilize" the dollar.  Rather than stabilizing the dollar, closing the gold window resulted in the dollar plummeting in value against all major currencies including the Swiss Frank, Deutsche Mark/Euro and Japanese Yen.  (The only major currency to lose value against the dollar during this time was the hapless British pound.)

Here is President Nixon in his own words on that fateful Sunday night;
"In recent weeks, the speculators have been waging an all-out war on the American dollar.  The strength of a nation's currency is based on the strength of that nation's economy - and the American economy is by far the strongest in the world.  Accordingly, I have directed the Secretary of the Treasury to take action to defend the dollar against the speculators.  I have directed Secretary Connally to suspend temporarily the convertibility of the dollar into gold or other reserve assets, except in amounts and conditions to be determined to be in the interest of monetary stability and in the best interest of the United States.  Now what is this action - which is very technical - what does it mean for you?  Let me lay to rest the bugaboo of what is called devaluation.  If you want to buy a foreign car or take a trip abroad, market conditions may cause your dollar to buy slightly less.  But if you are among the overwhelming majority of Americans who buy American-made products in America, your dollar will be worth just as much tomorrow as it is today.  The effect of this action will be to stabilize the dollar."  (2)

At the time of Nixon's action, foreign central banks could exchange $35 for one ounce of gold.  This exchange rate was established in the Bretton Woods agreement of 1944 referenced above.  Because gold doesn't earn interest, most foreign central banks that held dollars were perfectly willing to continue to hold dollars instead of exchanging them for gold.  However, the US ran huge trade and government deficits in the late 1960's.  Because of these deficits, foreign central banks became increasingly concerned the dollar would be devalued.  To protect themselves, foreign central banks asked to exchange increasingly larger portions of their dollar holdings for gold.  Rather than attacking the root of the problem - the enormous US deficits - Nixon created a convenient and completely mythical foreign enemy, "the international monetary speculator" and the "gnomes of Zurich."  (Note: President Erdogan of Turkey is currently following Nixon's playbook of blaming a raging inflation created by purely domestic incompetence and stupidity on foreign actors.)

The principal problem in the America of August 1971 was credit was growing much faster than the economy.  Moreover, the credit was not being used to fund wealth producing investments.  Instead, the credit was being used to fund the government's money squandering deficits and the enormous trade deficit.  (Note "credit" is simply another way of saying "debt" because they are merely two sides of the same coin.)  The important role gold played in synchronizing the growth of credit money with the growth of the economy was best summarized by the great Wilhelm Ropke,
"If in the production of goods the most important pedal is the accelerator, in the production of money it is the brake.  To ensure that this brake works automatically and independently of the whims of government and the pressure of parties and groups seeking "easy money" has been one of the main functions of the gold standard.  That the liberal should prefer the automatic brake of gold to the whims of government in its role of trustee of a managed currency is understandable." (3)

Unlike his Ivy League counterparts today, Arthur Burns - the Ivy League PhD economist who was Fed chairman when the gold window was closed - knew enough about real economics to recognize the significance of what Nixon did.  Burns lamented in his diary,
"My efforts to prevent closing the gold window - working through (John) Connally, (Paul) Volcker and (George) Schulz - do not seem to have succeeded.  The gold window may have to be closed tomorrow because we now have a government that is incapable, not only of constructive leadership, but of any action at all.  What a tragedy for mankind!" (4)

In spite of his despondency over Nixon's actions, Burns would serve as little more than Nixon's errand boy.  Burns employed the Fed to advance all of Nixon's asinine policy prescriptions including price controls.  Burns - along with his successor at the Fed, G. William Miller - took advantage of the gold window closing to keep interest rates far too low for far too long.  As a result, inflation, as measured by consumer prices, soared.  See the chart below for the appalling evidence of Nixon's blunder and the Fed's cowardice.  (All data is based on annual averages.) 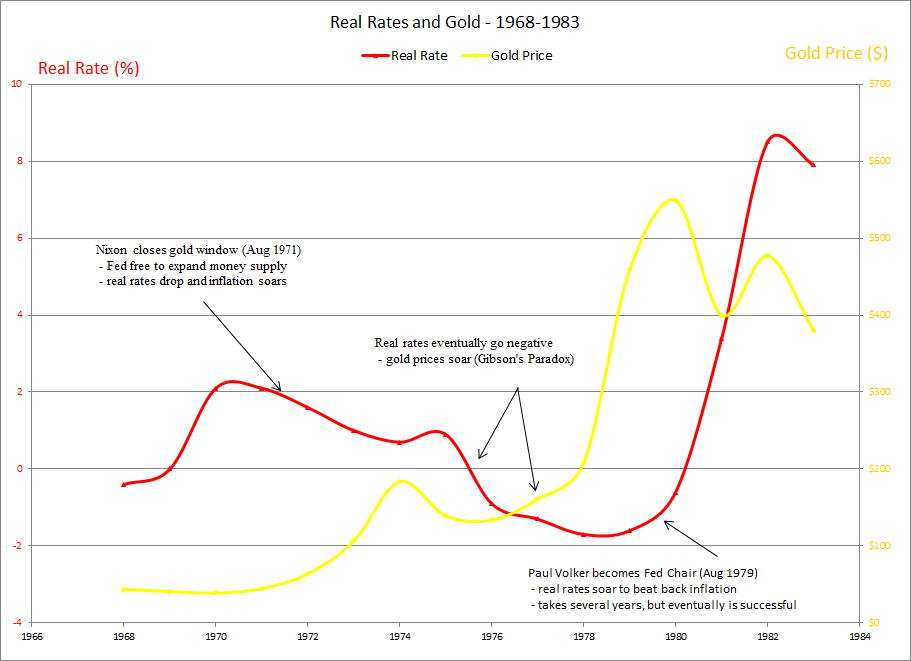 The important conclusion to draw from all of this is the negative real interest rates - which led to the soaring price of gold and the 1970s vintage inflation which devastated the US economy - could only come about because Nixon first closed the gold window.  Without the discipline imposed by gold, the US economy was completely reliant on the judgment of the Ivy League educated economists at the Fed.  Unsurprisingly, the results were disastrous.

As will be discussed in Part II, the damage from Nixon's and the Fed's cowardice would not be limited to the inflation of the 1970's and early 1980's.  Nixon's world altering blunder, along with completely new economic theories- which erroneously held that economists could use mathematics to model economies in exactly the same way a physicist uses mathematics to model electron orbits around an atomic nucleus - would directly lead to the highly leveraged, economically useless derivative markets, the bubble in tech stocks, the housing bubble and the financialization of the US economy.

(1)  On August 16, 1971, the New York Times published an editorial which praised Nixon.  "We unhesitatingly applaud the boldness with which the President has moved on all economic fronts."  New York Times, "Call to Economic Revival," August 16, 1971, https://www.nytimes.com/1971/08/16/archives/call-to-economic-revival.html

(2) Richard Nixon, "Address to the Nation Outlining a New Economic Policy: The Challenge of Peace," (quote starts at about the 40-second mark) https://www.youtube.com/watch?v=iRzr1QU6K1o

(7) Gold prices are closing prices for the year, http://onlygold.com/Info/Historical-Gold-Prices.asp