It was a remarkable time for Ben Bernanke to pass himself off as some sort of economic savant or soothsayer, particularly so when it came to the beneficial impact of central banks.  While Bernanke was taking credit for all the great things central banks were doing to economies around the world, the housing bubble that Bernanke and his Fed colleagues were laboring day and night to blow up, was two months from reaching its zenith!  In terms of homeownership, the housing bubble peaked in April 2004 - just two months after the Great Moderation speech was given!

More generally, the disastrous impact the Federal Reserve has had on the US economy can be seen in the chart below.  It is useful to recall that the US went approximately 70-years with a bubble to speak of. Prior to 2000, the last bubble of any consequence in the US was the 1929 stock bubble, and, of course, the Fed had a leading role in that debacle.  (2)  However, since the year 2000, the US has suffered from three enormous bubbles - tech stocks, housing and 'everything.'  More significantly, each bubble was much larger than the one which preceded it; the housing bubble dwarfed the tech bubble, and today's everything bubble dwarfs the housing bubble.  As the chart makes clear, what drove the bubbles higher and higher was the Federal Reserve driving rates lower and lower. 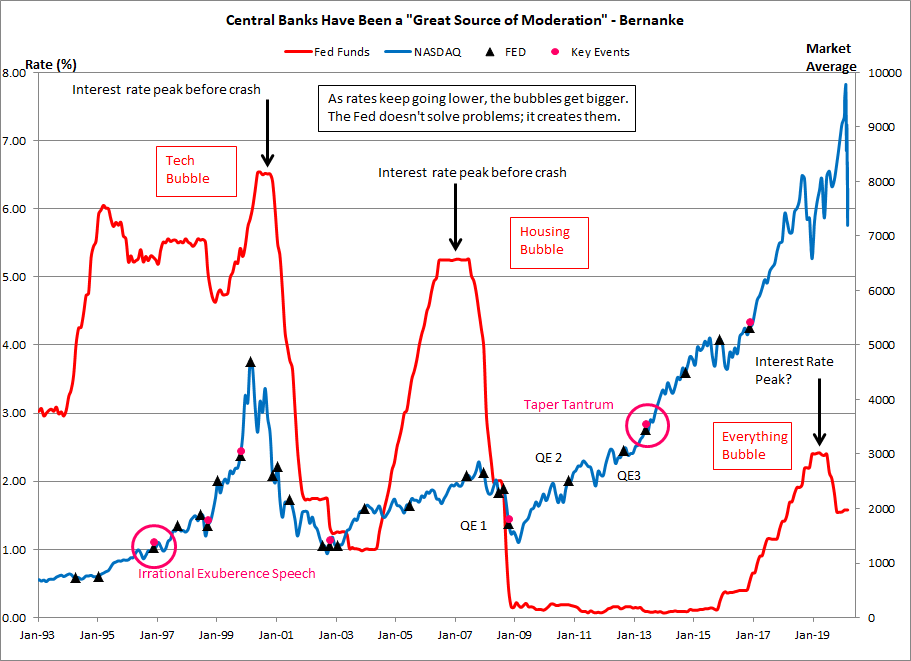 Fed apologists, will claim that today's market chaos is only the result of the Corona virus.  The Corona virus is merely the pin that pricked the latest of the three enormous Fed fueled bubbles.  It is interesting to note that the December 2018 sell-off - which proved to be a harbinger of things to come - occurred before anyone had heard of the Corona virus or the Wuhan Institute of Virology.  (3)  Moreover, the Corona virus hardly explains why the Fed intervention associated with today's 'everything' bubble collapsing will completely dwarf the interventions that followed in the wake of the 2008 debacle.

The fundamental question remains; how could the Fed be performing a positive economic role when crises are occurring with an unprecedented frequency while become increasingly more severe  This chart makes it clear; Ben Bernanke was completely wrong when he claimed the Fed was a major source of the "Great Moderation.'  Instead, this chart makes it clear that the Fed is the primary driver of all the economic chaos of the past twenty-five years.

This is just getting started.