In his post-crisis memoir, The Courage to Act, Ben Bernanke recalls 'seething' in anger at AIG;
"At the time of our initial rescue of AIG, I kept my emotions in check and tried to view the situation analytically, as a problem to be solved.  But once I understood how irresponsible (or clueless) AIG's executives had been, I seethed... It makes me angry.  I slammed the phone more than a few times on discussing AIG." (1)
In this quote Ben Bernanke makes it appear as if the AIG debacle was the result of problems wholly related to AIG and its irresponsible management.  Nothing could be further from the truth.  (By the way, part of this irresponsible management was an ultimate Washington DC insider, Richard Holbrooke.)

In Chart 1 and the list that follows some of the precursor events to the collapse of AIG are listed.  These events can be separated into one of two types - 'Fed Contributions and 'Red Flags;' 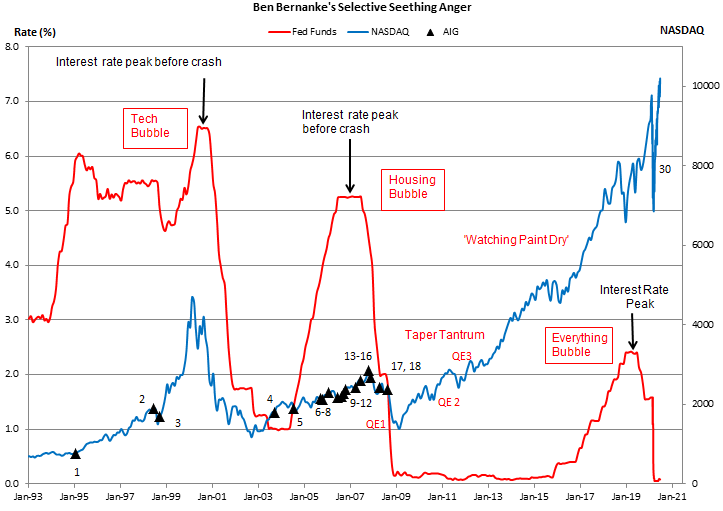 1.  February 1995: Alan Greenspan, Robert Rubin (Treasury) and Bill Clinton work around Congress to bailout investors in Mexican debt - the so-called 'Tequila Crisis.'  They used the Exchange Stabilization Fund, (ESF) to do so.  The ESF was funded by FDR confiscating gold at a price of $20.67 per ounce and then devaluing the dollar to $35 per ounce.  The ESF is under exclusive control of the Treasury Department.  (It was also used during the Global Financial Crisis in 2008.)

2.  July 1998: Hearings are held on derivatives and whether they should be regulated.  Lawrence Summers (Treasury) and Greenspan both argue against regulating derivatives.  Summers gives two reasons for not regulating derivatives.  The collapse of LTCM two months later will prove both these reasons wrong.  In spite of clearly being wrong, Summers doesn't admit a mistake and maintains his position on derivatives.  Had the proper lessons learned from LTCM been acted upon, the AIG debacle never could have occurred. (2)

3.  October 1998: 'The most irresponsible act' in Fed history is prompted by LTCM's spectacular collapse.  Greenspan cuts rates between regularly scheduled Fed meetings.  The rate cut serves as a clarion call to Wall Street and sparks the tech bubble.

4.  October 2003: Tim Geithner is named President of the Federal Reserve Bank of New York.  The AIG fiasco will metastasize into an enormous crisis right under Geithner's nose.  Later Geithner will testify that he was never a regulator.  However, the NY Fed's website states; "The Supervision Group of the Federal Reserve Bank of New York supervises the financial institutions that are subject to the Board's supervision and are located in the Second Federal Reserve District....the objectives of supervision are to evaluate, and to promote the overall safety and soundness of the supervised institutions, the stability of the financial system of the United States and compliance with relevant laws and regulations."

5.  August 2004:  In a voice vote, the net capital rule is changed.  The net capital rule limits how much leverage can be used on Wall Street.  The SEC believes that 'value at risk' computer models are now so accurate that Wall Street can use much greater leverage.  The changes were a disaster and most obviously manifested themselves in the collapse of Bear Stearns and Lehman, and the near-death experience of Merrill Lynch.

6.  October 2005: Investment manager Michael Burry writes to his investors and tells them he has established a major 'short' position in mortgage bonds.  Burry thinks there is an enormous housing bubble and the mortgage bonds will collapse in value.  "Selectively shorting the most problematic mortgage-backed securities in history today amounts to just such an opportunity." (3) (In the movie "The Big Short," Burry was played by Christian Bale)

7.  November 2005: Deutsche Bank's Greg Lippman wants to be short the mortgage market by owning credit default swaps (CDS).  AIG is the main seller of mortgage CDS.  By purchasing CDS from AIG, Lippman is betting mortgage bonds will suffer large losses.  This is the same trade that Michael Burry is making. (4)  (In the movie, "The Big Short," Lippman is played by Ryan Gosling)

8.  Early 2006: Gene Park of AIG Financial Products, (FP), convinces Joe Cassano, the head of AIG FP to stop insuring mortgage bonds via credit default swaps.  However, AIG FP doesn't attempt to reduce their exposure via the CDS products they have already sold.  This decision will produce at least $60-billion in losses. (5)

9.  July 10, 2006 - Henry Paulson is appointed Treasury Secretary.  Paulson had been CEO of Goldman Sachs and had spent most of his working life on Wall Street.  His ignorance of the mortgage market was total.

10. September 08, 2006 - Grant's Interest Rate Observer fires a shot across the bow of the mortgage derivative market, and openly discusses the merits of being short mortgage bonds.  "Overvalued, we, in fact, judge trillions of dollars of asset-backed securities and collateralized debt obligations to be, and we are bearish on them... housing related debt is cheap by no standard of value.  For institutional investors equipped to deal in credit default swaps, there's an opportunity to lay down a low-cost bearish bet."

In the same issue, Grant's then goes on to describe in perfect detail exactly how someone who wants to short mortgage bonds can identify the bonds most likely to default; He (a CDS buyer) looks for "high Florida exposure, high California exposure, high second-lien exposure.  You look for equity take out loans because those appraisals tend to be overstated, a high-percentage of stated income loans (aka liar loans) and you build yourself a portfolio of credits from weak underwriters that are ultimately likely to be impaired." (6)

THIS WAS TWO YEARS BEFORE THE FAILURE OF LEHMAN BROTHERS!

11. Fall 2006 - Deutsche Bank's Greg Lippman has now made presentations to hundreds of Wall Street investors.  These presentations completely document why mortgage bonds are ripe for an epic collapse, and owning mortgage CDS is an easy way to capitalize on this collapse. (7)

12. November 13, 2006 - Investor and author, Peter Schiff, addresses the Western Regional Mortgage Bankers Conference and warns of impending collapse.  He states, "The way this sub-prime works...65% of the sub-prime mortgage market, 65% of those bonds, of those mortgages - where a guy - stated income, no-doc, negative am, risky loans - 65% of those things are repackaged by Wall Street and rated triple-A.  Triple-A!...That particular piece of paper should be rated F and it will go to zero as will several tranches above it...The bottom is going to drop out of the sub-prime market." (8)

14. July 17, 2007 - A hedge fund manager, Greg Eisman, says on a conference call, "Just throw your model in the garbage can.  The models are all backward looking.  The models don't have any idea of what the world has become....We are in the midst of one of the greatest social experiments this country has ever seen.  (to increase homeownership, PCS) Losses in excess of $300-billion should be expected from the (derivative) portion of the market." (9) (In the movie, "The Big Short," Eisman is played by Steve Carrell.)

16. December 2007 - AIG executives and a Wharton finance professor hold a press conference to explain their investments in mortgage bond 'insurance' via credit default swaps are not exposed to large losses.  They claim the computer  models they use to make their investments are "simple, they're specific and they're highly conservative." (10)  The Wharton finance professor is Gary Gorton, Dunce #27.

17. May 08, 2008 - AIG admits to another $9-billion in unrealized losses on its credit default swap investments.  The total losses are now a staggering $20-billion.

18. September 16, 2008 - Acting on its own authority - without any input from Congress or the President - Ben Bernanke's Federal Reserve initiates an $85-billion bailout of AIG.

CONCLUDING REMARKS:
(Item numbers here refer to Chart 1)
Ben Bernanke would have us believe that the AIG debacle was the result of a 'rogue company.'  It is little different when a bank dismisses enormous trading losses as the result of a 'rogue trader.'  The simple fact - as evidenced here - is both the Federal Reserve and the Treasury Department played a huge role in the generation of the the AIG crisis.  The Fed and Treasury both vociferously argued against regulating derivatives and maintained this position even after LTCM collapsed, (#2 & #3).  The Fed and Treasury bailed out speculators in Mexican debt (#1) and sat idly by as the SEC allowed much greater levels of financial leverage with its changes to the net capital rule (#5).

After laying the groundwork for an enormous disaster, the Fed and Treasury failed to react to one warning sign after another.  A full two years before the collapse of Lehman and AIG, Grant's Interest Rate Observer was publishing articles that described exactly how mortgage bonds would fail and what specific attributes made them most likely to fail, (#10).  By the fall of 2006, a Deutsche Bank trader had made hundreds of presentations to investors that detailed the problems the mortgage market was rife with, (#11).  In November 2006, Peter Schiff spoke to mortgage brokers and told them "the bottom is going to drop out of the sub-prime market," (#12).

When all these - and other - red flags were being raised, Ben Bernanke was Fed chair.  The president of the NY Fed - who is responsible for Wall Street - was Tim Geithner.  The Treasury Secretary was Henry Paulson, the former CEO of Goldman Sachs.  I don't begrudge Bernanke's seething anger at AIG.  However, he needs to save some of that anger for himself and others that he worked with.