In last week's blog post, we discussed the virtue signaling latent in Microsoft's declaration that it would soon be not only carbon neutral, but carbon negative.  Microsoft's entire reason for existing is computers and computers inhale electricity.  For Microsoft then to make much of its carbon neutrality when it is in an industry that completely relies on prodigious amounts of electricity generation is transparently bogus and self-serving.

We see the same same self-serving, sanctimonious self-righteousness in individual states that we see from Microsoft.  The prime example of this self-righteousness comes, of course, from California.  California routinely trumpets its progress on renewable energy, but the manner in which California judges its progress is just as meaningless as Microsoft's.  California judges its progress against the power that is produced in California, not the power California uses.  (California imports huge volumes of electricity from dams in Oregon and Washington, and nuclear plants in Arizona, Palo Verde in particular).  Moreover, California has been deindustrialized.  Energy intensive products like aluminum or steel - which are used throughout California - have to be made elsewhere.

Because California is such a large importer of electricity and because California has been de-industrialized, California's boasting about the renewable energy it generates requires additional inspection to discern just how meaningful this figure is.  This inspection will clearly show that California has very little to brag about.  In fact, California's progress on renewable energy generation, wind and solar, only mirrors the average progress that is being made in the US as a whole!

Chart 1 allows us to determine the total per capita per hour electricity consumption in the US.  Because the numbers associated with electrical energy generation are so large, per capita figures are often much easier to work with.  In addition, per capita figures also provide some context to what would otherwise be just numbers with no physical meaning.  Total US per capita per hour consumption of electrical power is taken from total US energy consumption, 4,207,353 x 103 MW-hours, and dividing this figure by the US population (~320-million) and the number of hours in a year (8,760).

So, what is the per capita per hour consumption in the US? 1500-watts (1.5-kw).  This means that for every person in the US, 1.5-kw of electrical power is being consumed every hour of every day!

What the data shows is that it is almost exclusively 'Red" states that are generating the most renewable energy.  The per capita generation figures in particular show the progress that is being made relative to the 'bluest' blue states like California, New York and Massachusetts.  In fact, of the top ten states based on per capita production of renewable energy, all but two are among the 'reddest' Red states.  (Kansas voted for Alf Landon against FDR in 1936!) 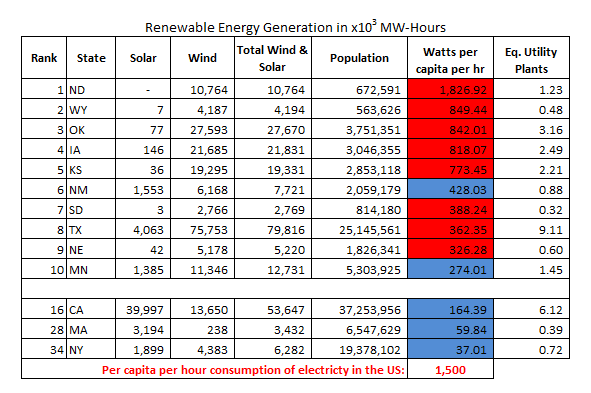 I want to highlight some additional inferences from this data;

The brief analysis here should show how virtually devoid of any real meaning California's reported progress on renewable energy is.  California's progress relies on the fact California imports huge volumes of electricity from neighboring states and had been denuded of the heavy industry that relies on large electricity consumption.  (Californians still use aluminum, steel, fertilizer and petrochemicals, they just don't make any!)  Keep this analysis in mind the next time someone says the country needs to do a better job of duplicating California's progress on renewables (wind and solar).  In response, tell them that California first needs to catch up with North Dakota, Oklahoma and Texas!

ENDNOTES:
(1) Energy Generation Data is from the Energy Information Administration, EIA.  The link here provides data for the years 2007-2017.  https://www.eia.gov/electricity/annual/html/epa_03_01_a.html