The housing bubble - which was sparked by President Clinton's goal of increasing home ownership to 67.5% - was an attempt by man to play God, and to suspend the laws of economics.  The government's goal of greatly 'decarbonizing' the production of electricity in 10-15 years as part of a 'Green New Deal,' displays an even greater level of arrogance.  The goal of decarbonizing electricity generation not only suspends the laws of economics, it also seeks to suspend the laws of engineering and physics.

In defense of all those pushing the Green New Deal, they cite the progress California has, (supposedly), made.  While this progress looks good at first glance, a closer inspection reveals that California hardly provides a template for the rest of the country to follow.  In fact, a review of California's so-called 'progress' on reducing the carbon footprint of its electricity generation shows just how fraught with enormous risk the Green New Deal is.  The facts that make California a particularly poor model for other states to follow are; 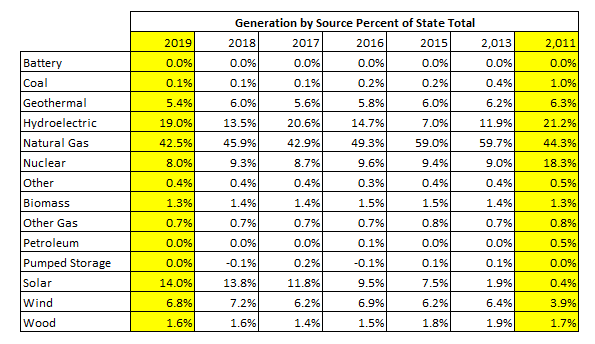 CONCLUDING REMARK:
Because of the hard work of engineers, skilled craftsmen and tradeworkers, along with an enormous physical capital infrastructure that has been built up over decades, electricity in the United States is provided reliably and at very low cost.  As result, electricity is completely taken for granted, and few people appreciate the enormous amount of work that goes into producing it.  This ignorance - along with an enormous amount of arrogance on the part of politicians - are what fuel the Green New Deal.  As the review of California's so-called progress on increasing renewable energy generation shows, California hardly provides a model for the rest of the country to follow.  California's per capita use of electricity is very low, and it greatly benefits from renewable sources, (hydro and geothermal), that aren't available elsewhere.  Finally, its growth in renewable sources of power has started to level off.  Moreover, if these growth rates don't dramatically increase over the next few years, wind and solar won't be able to bridge the gap created by Diablo Canyon shutting down.  California, already the largest importer of electricity on both an absolute and relative basis, will be forced to import even more electricity from neighboring states.  (4)  Thus, California hardly provides an example for other states to follow.

3.  Diablo Canyon features two Westinghouse Pressurized Water Reactors.  Unit 1 was placed into service in 1985 and Unit 2 in 1987.  Since then, the site has been an extremely reliable source of huge amounts of power.  There is a seismic fault in the area that I believe was discovered after construction of the site began.  While the subsequent design would have been evaluated against this 'new' risk and upgraded as required, there may be valid reasons for shutting the facility down.  The discussion here isn't arguing the merits of keeping Diablo Canyon open.  Instead, the discussion here is limited to the observation that, the small increases in renewable energy production of the past few years, can't make up for the enormous loss in power from Diablo Canyon shutting down.

4.  Data for California's electricity generation comes from the Energy Information Administration (EIA).  See the link below and select 'Full Data Tables 1-16' for the raw data used in this report.
https://www.eia.gov/electricity/state/California/