DISCUSSION
Let me preface this post with a personal note.  I served as an officer in the US Air Force for six years.  Moreover, I majored in mechanical engineering primarily because I knew I was going into the Air Force.  What follows then is not some anti-American screed, or the ramblings of someone completely ignorant of how the world really works.  Instead, what follows is a sober analysis that attempts to reconcile the actions of the Central Intelligence Agency (CIA) with the ramifications of these actions.  The analysis will show that the CIA, exactly like the Federal Reserve, capitalizes and accumulates power as a result of the enormous chaos it creates and the huge number of mistakes it makes.

Perhaps the best example of how the CIA accumulates power in the wake of the chaos it creates is the 1953 coup that overthrew the Prime Minister of Iran,  Mohammed Mossadegh.  Mossadegh's springboard to power was the nationalization of what had been the Ango-Iranian oil company (now British Petroleum, or BP).   The original concession to operate in Iran was signed on May 28, 1901.  The concession was granted by the Qajar dynasty that ruled what was called Persia at the time.  It was thoroughly one-sided, and, over time, the concession, along with the woefully corrupt and incompetent Qajar dynasty, grew increasingly unpopular in Iran.  After Reza Shah Pahlavi rose to power in Iran and deposed of the Qajar dynasty, the concession was cancelled on November 27, 1932.  Reza Shah had risen to power by the force of his personality and the disgust with the thoroughly corrupt monarchy of the Qajars.  A new concession was negotiated and signed in 1933.  For many reasons, by the 1950s, a new concession agreement was almost universally desired in Iran.  Ominously for the British, in late 1950, American oil companies negotiated a 50:50 profit sharing agreement with Saudi Arabia.  Unsurprisingly, Iran thought that would be an equally reasonable agreement to have with the British.  The British refused to negotiate in any meaningful way and hardly budged from the terms of the 1933 agreement.  Completely blind to all the bridges they had burned in Iran, the British were dumbstruck when, on May 1, 1951, Iran nationalized what had been the Anglo-Iranian oil company.

In spite of the fact that Britain had already nationalized several of its industries - and would continue to do so for years on end - the British fought nationalization by Iran and set about undermining Mossadegh's government from inside Iran.  To complement these internal machinations, the British tried to convince the Truman Administration to help them overthrow Mossadegh.  Truman, to his credit, refused.  The British efforts to undermine Mossadegh were discovered in October 1952 and Iran broke off diplomatic relations with Britain.  After being expelled from the country, the British were forced to completely rely on the US to overthrow Mossadegh.  President Eisenhower eventually agreed to overthrow Mossadegh, and Allen Dulles of the CIA oversaw the operation.  Below is a brief timeline of events;

The coup itself was brutally simple.  In essence the CIA brided all sorts of people - military officers, street thugs, politicians, clergy and even the Shah's twin sister, Princess Ashraf - to undermine the elected government of their country. (2) The CIA believed that if they could sow enough chaos and have the chaos blamed on Mossadegh, then Mossadegh's political support would wither.  Once opposition to Mossadegh reached critical mass, he could then be toppled.  Among the two most spectacular examples of sowing chaos was the kidnapping and brutal murder of Iran's chief of police - and Mossadegh loyalist - General Mahmoud Afshartus, and the toppling of a statue of Reza Shah in Tehran's Toopkhanen Square.  As simple as the toppling of a statue might appear, to many patriotic Iranians the toppling of the statue was deeply symbolic and an unpardonable lack of respect for the country's history.  To these people, not only was the unruly mob at fault, so was Mossadegh for allowing it to occur in such a brazen manner.  (See the photo below.)  Coupled with the widespread chaos and violence in the Tehran streets - almost exclusively organized and funded by the CIA - this simple act greatly undermined Mossadegh's popular support with many Iranians, the military in particular. 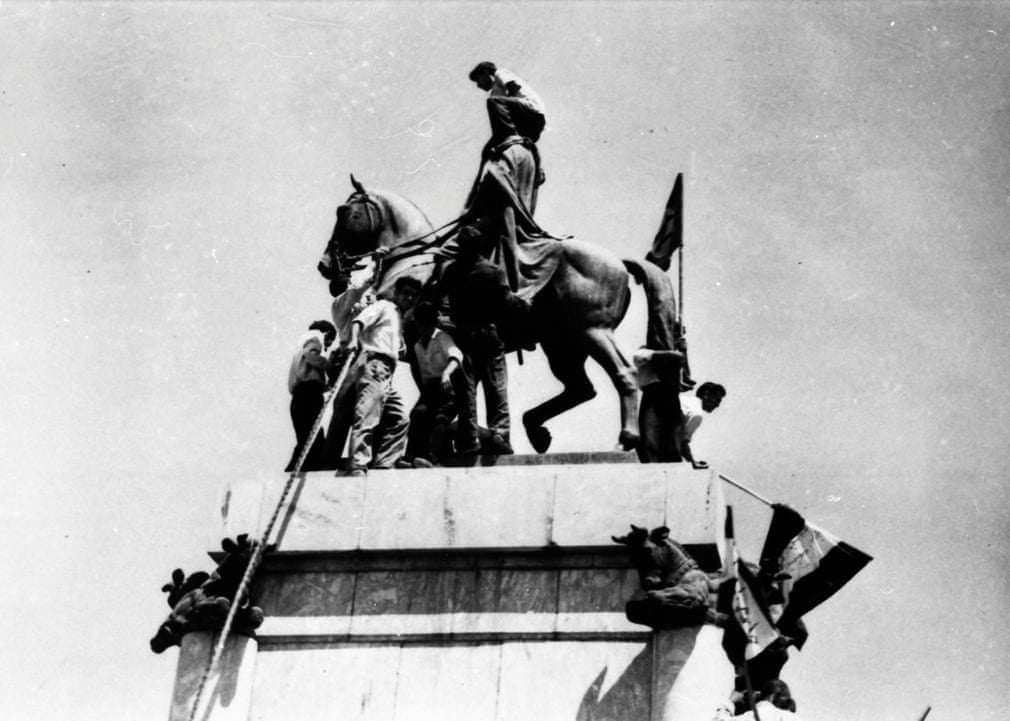 By CIA standards, the coup was a rousing success.  In fact, before the CIA's involvement in the coup became widely known, it was secretly celebrated by the CIA as one the agency's greatest successes.  Of course, in time, the coup would eventually be credited as the source of the term 'blowback.'  Blowback refers to the unintended consequences of an operation.  In this case, the immediate 'unintended consequences' of the 1953 coup was Ayatollah Khomeini's Islamic revolution of 1979 and the American hostage crisis.  (See the timeline below and note the American embassy was stormed in 1979 in large part because Iranians feared that the embassy would host the hatching of another coup exactly as it had done before in 1953).

Regrettably, the 'blowback' associated with the 1953 coup would not be limited to the immediate unintended consequences inside Iran or even Iran's relationship with what it now considered the 'Great Satan.' the United States.  Instead, the 1953 coup would have enormous and direct consequences throughout the entire Middle East and have a direct impact on nearly everything that came after it.  See in particular the timeline of events immediately below and note how the 1953 coup was one link in the chain that directly leads to the 9/11 attacks and the subsequent invasions of Iraq and Afghanistan.

The prime motivation for Saddam Hussein's invasion of Kuwait was economic.  After nearly eight-years of war with Iran, his country was completely impoverished.  (4)  Iraq had borrowed heavily to finance its war with Iran, and among the countries it had borrowed from was Kuwait.  Saddam argued he was doing the Arab gulf states a great favor by fighting Iran, and these gulf states should then forgive Iraq's debts.  When Kuwait insisted that Iraq make good on its war debts, Iraq invaded Kuwait.  With this being the case, there is a direct causal chain between the 1953 coup, the 9/11 attacks, and the subsequent invasions of Iraq and Afghanistan.

It is not being argued that the planners of the 1953 coup should have foreseen all these events in advance.  Instead, it is being argued that because events such as these can't be seen in advance, the coup never should have been launched in the first place!  In spite of the CIA's clearly demonstrated role in sowing chaos in the Middle East and bringing that chaos to American shores, the CIA hasn't seen its role challenged in any meaningful way.  Indeed, in the aftermath of the 9/11 attacks - which were a result of previous CIA operations - the CIA accumulated more power than it ever had before.  It is in the way it capitalizes on the enormous mistakes it continually makes, that the CIA is every bit the equal of the Federal Reserve.

(2) Of course by relying on people who can be bribed to overthrow a government, the government that these corrupt people then establish is almost guaranteed to be corrupt and ultimately unpopular.  This common-sense understanding of human nature completely escapes the CIA.

(3) https://www.wilsoncenter.org/sites/default/files/Iran-IraqWar_Part1_0.pdf, see page 16 of the pdf.

(4) Many economists believe that war produces a great economic boom.  Iraq's experience should provide clear evidence to the contrary.  Absent his war with Iran, Saddam almost certainly never would have invaded Kuwait.