SUMMARY:
This article compares how the four-hundred PhD economists at the Fed and mechanical engineers use mathematical techniques.  As the article makes clear, there is no comparison.

DISCUSSION:
The Federal Reserve
The founding basis of all central banks was trenchantly expressed by Walter Bagehot as, "In a crisis, a central bank can lend freely, but only against good collateral and only at high rates of interest."  As this operational definition attests, a central bank of this type only reacts passively with the economy.  The central bank's only role is to serve as an emergency source of credit, the proverbial lender of last resort.  However, note that the central bank won't provide this emergency credit to anyone and everyone.  Good collateral must exist, and the best evidence of this good collateral is the borrower must be willing to pay high rates of interest to keep their hands on this collateral.  The Bank of England used this simple operating instruction to maintain the value of the British pound for hundreds of years.  Indeed, a strong case can be made that it was the strength of her currency, not that of the Royal Navy, that allowed a tiny-island nation completely devoid of natural resources to build an empire that would dwarf Rome's.

Today's Federal Reserve no longer subscribes to 'Bagehot's dictum.'  Rather than reacting with the broader economy passively, today's Fed seeks to actively mange the economy to some desired outcome.  The Fed does this by manipulating interest rates to some Fed derived 'optimum' level and achieves this objective with open market operations; buying or selling financial securities.  The foundation upon which the Fed's active involvement in the economy is built is the belief that the Fed has tremendous insight into the economic future; specifically that the Fed can accurately predict how a change to the economy now will manifest itself later in the economy's performance some time in the future.

The source of the Fed's (supposed) insight is the Fed's model of the economy.  The Federal Reserve Board employs over four-hundred PhD economists.  (1)  The operating basis of the Fed is that these PhD economists are smart, (they're not), and their model of the economy is accurate, (it isn't).  How can it be stated that these PhD's aren't smart and their economic model is no good?  Well, we do have the example of three huge bubbles in the past twenty-five years and an unprecedented concentration of wealth that these bubbles (and their collapse) produced.  See Figure 1. 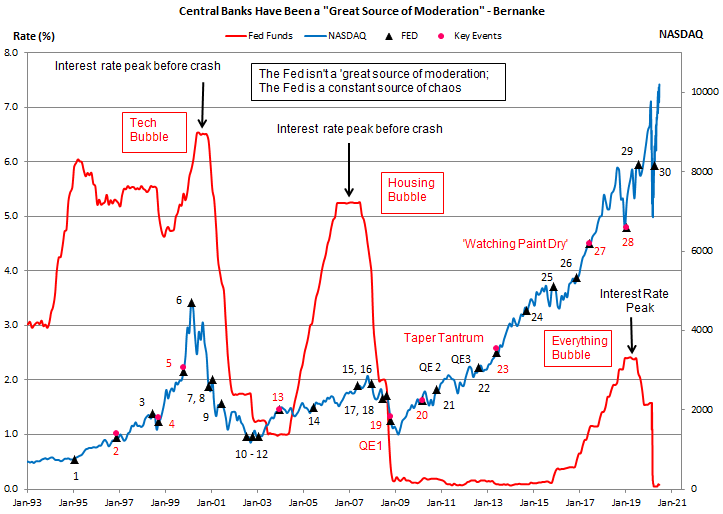 However, besides the demonstrated inept performance of the Fed, there is another - perhaps better - way of demonstrating the complete inadequacy of the Fed and its phalanx of PhD economists to actively manage the economy.  This better way is an observation of Ben Bernanke.  In his post-2008 crisis memoir Bernanke wrote;
"Of course we knew how difficult it is for economists to peer into the future.  The Board's research director, Dave Stockton, a fine forecaster of long experience with an equally fine - and dark - sense of humor reminded us what a messy business it was.  'I thought I would invite you to don your hair nets and white butcher smocks and join me for a tour of the sausage factory,' he quipped, before discussing the analysis underlying the staff projections." (2)

This comment was made shortly before the Fed's September 2007 Open Market Committee (FOMC) meeting.  Think about that!  In terms of homeownership, the housing market peaked in April 2004!  (See Figure 2)  In the summer of 2007, AIG's trade in credit default swaps was starting to hemorrhage huge losses and by the end of August 2007 Bear Stearns was sued because two of its mortgage focused hedge funds had collapsed.  In spite of the emerging economic chaos then occurring and the even larger calamities in the offing, not only is the Fed unable to understand what is going on, they are actually making jokes about it!  Imagine engineers ribbing each other after a bridge collapse or a plane fell apart in the air?  Well, that is basically what the Fed is doing here.

Mechanical Engineers
Speaking of engineers The paragraph below is an excerpt from one of my graduate level mechanical engineering textbooks, Boundary Layer Theory, by Hermann Schlichting of the Engineering University of Braunscheig in Germany. (3)  The explosion in aerospace technologies that took place between the 1930s and the Saturn V rocket program are based on many of the ideas contained in this book.  The excerpt quoted below is mathematically dense and it is not important to understand everything that is being said.  (I no longer remember the difference between types of partial differential equations!).  What is important is to recognize the great length Dr. Schlichting went to treat the analysis techniques with respect and caution.  The techniques - powerful as they were - could only be applied in certain physical conditions.  Applying these techniques without discretion would almost certainly lead to designs that didn't work.

"Chapter VIII General Properties of Boundary-Layer Equations
Although the boundary-layer equations have been simplified to a great extent, as compared to the Navier-Stokes equations, they are still so difficult from the mathematical point of view that not very many general statements about them can be made.  To begin with, it is important to notice that the Navier-Stokes equations are of the elliptic type with respect to the coordinates, whereas Prandtl's boundary-layer equations are parabolic.  It is a consequence of the simplifying assumptions in boundary-layer theory that the pressure can be assumed constant in a direction at right-angles to the boundary-layer, whereas along the wall the pressure can be regarded as being 'impressed' by the external flow so that it becomes a given function.  The resulting omission of the equation of motion perpendicular to the direction of flow can be interpreted physically by stating that a fluid particle in the boundary-layer has zero mass, and suffers no frictional drag, as far as its motion in the transverse direction is concerned.  It is, therefore, clear, that with such fundamental changes introduced into the equations of motion we must anticipate that their solutions will exhibit certain mathematical singularities, and that agreement between observed and calculated phenomena cannot always be expected."

No mention of making sausages here.