The San Onofre Nuclear Generator Station (SONGS) was a nuclear power plant located between San Diego and Los Angeles in San Clemente, California.  The plant actually sits on Camp Pendleton, and anyone driving between Los Angeles and San Diego on I-5 would drive right by the plant.  See Figure 1.  Unit 1 operated from 1968-1992.  Unit 2 and Unit 3 were placed into operation in 1983 and 1984 respectively. This article describes the pitfalls that can result from engineers using computers as economists do.  More specifically, it describes how what should have been a fairly straightforward task - replacing the San Onofre steam generators - became an enormous problem that resulted in 2200-MW of power production being lost. 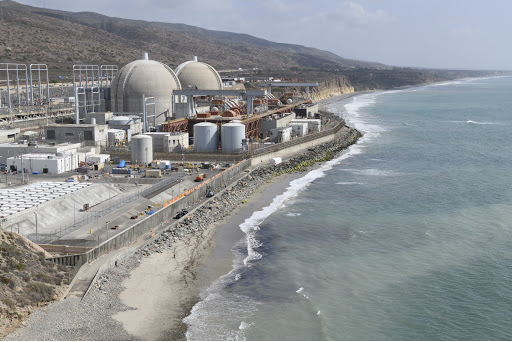 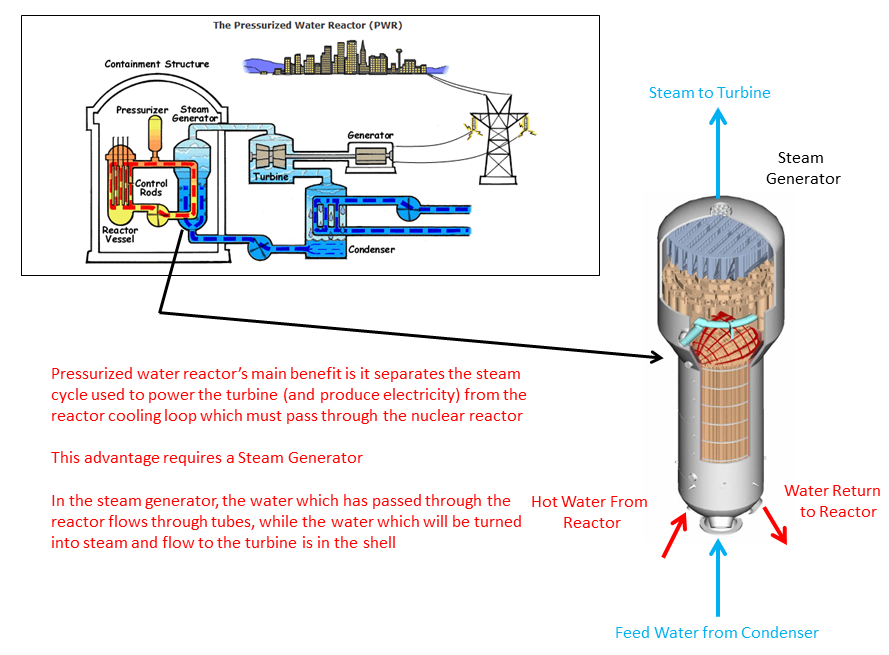 The isolation between the primary and secondary cooling circuits is the principle advantage of a PWR design. (1)  A PWR is the reactor of choice for use in submarines and aircraft carriers.  Most of the nuclear power plants in the US utilize a PWR design.  However, as with any technology there are always plusses and minuses, and the 'isolation' in the PWR design requires the steam generators.  Steam generators are enormous; full of water they can easily weigh more than 1-million pounds and can stand 60-feet tall.  The tube-side of the steam generator has to withstand pressures above 2200-psi while the 'shell-side' must withstand pressures above 1000-psi.  Over time, steam generators will degrade and have to be replaced.  Replacing a steam generator requires breaching the reactor containment structure (2); the two large spherical objects in Figure 1.  The process can easily take 6-8 months to complete and will cost hundreds of millions of dollars.  Fortunately, this replacement only needs to be done once every 25-years or so.

The San Onofre steam generators were replaced from September 2009 trough April 2010 (Unit 2) and October 2010 through February 2011 (Unit 3).  As part of the steam generator replacement it was decided to change the material of construction of the tubes used to carry the hot water in the primary cooling circuit.  The original material was Inconel 600, while the replacement steam generators (RSGs) would use Inconel 690.  (3)  While Inconel 690 was a better material to use for a number of reasons, it had a lower thermal conductivity than Inconel 600.  As a result, to maintain electricity generation - roughly 1100-MW per reactor - more tubes would have to be put in the replacement steam generators.  As a result, the existing steam generator design couldn't simply be duplicated.  (To put some perspective on the 1100-MW reactor output, to replace the electricity produced by Units 2 and 3 over their 26-year operating lives would have required burning 138-million tons of coal - roughly the total annual output of Pennsylvania and West Virginia! (4)) 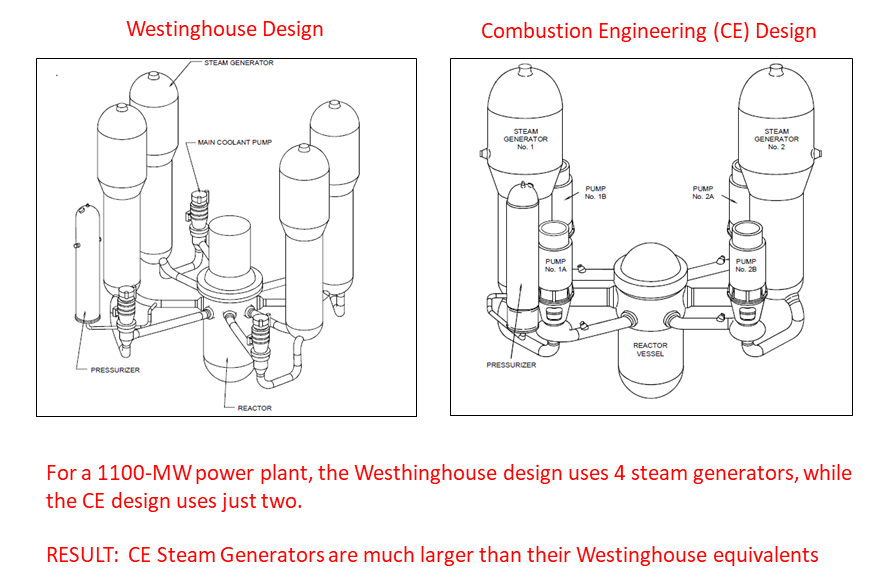 In designing the replacement San Onofre steam generators, the design firm relied on computer codes developed for the smaller Westinghouse designs.  Not only was their a large size difference between the two steam generator designs, different methods were used to support the tubes and prevent them from vibrating against each other.  The software used to design the San Onofre steam generators did not account for these and other differences.  Shortly after being placed in service, the new steam generators began to leak  between the primary and secondary cooling circuits.  This is a very serious issue and undermines the biggest advantage of a PWR design.  Because the primary circuit operates at a much higher pressure than the secondary circuit - 2200-psig versus 1000-psig - radioactive material leaks from the primary cooling circuit into what should be the 'clean,' secondary cooling circuit; again see Figure 2.  In January 2012, both Units 2 and 3 were shutdown until the source of the leaks could be determined.

Southern California Edison, SCE, the plant operator, considered running the plant at reduced power.  The thought was this would reduce the tube vibration, but the Nuclear Regulatory Commission (NRC) wouldn't allow this without a lengthy licensing process.  Eventually, on June 7, 2013, SCE announced they would permanently retire Units 2 and 3.  Just like that, 2200-MW of electricity generation vanished from California.  Instead of operating for 25-years or more, the replacement steam generators operated for less than two.

Concluding Remarks:
SCE sued the design firm for $7.5-billion with the damage amount based on the lost output from the plant over the next twenty-years.  An arbitration panel ruled against SCE and the design firm's liability was limited to what had been described in the contract; roughly $125-million.  To add insult to SCE's injury, roughly half of the arbitration panel's award was returned to the design firm to pay for the legal fees associated with the 7.5-billion lawsuit.  Ouch!  From a purely technical standpoint, engineers poured through the details of the computer codes at issue and all sorts of other design decisions associated with the steam generator replacement project.  While the over-reliance on computers at San Onofre duplicated the experience of economists and Wall Street, the postmortem inspections and root cause analysis (RCA) at San Onofre stand in stark contrast to the failure of either Ivy League economists or Wall Street to revisit their mistakes.

Indeed, of the three examples of the misapplication of computers by Wall Street and economists discussed last week - LTCM, the net capital rule and the AIG debacle - none of these prompted any sort of soul-searching on the part of either the perpetrators of these blunders or the regulators purportedly responsible for keeping these sorts of things from happening.  For example;

No one associated with the steam generator replacement at San Onofre covered themselves with glory.  However, because of how everything that went wrong was studied, reviewed and documented, there is very little chance that these mistakes will be repeated.  In contrast, the manner in which the financial community responded - or didn't respond - to the LTCM, net capital rule and AIG debacles conclusively demonstrates why we keep suffering from the same sort of economic calamities, often in rapid succession.

Endnotes:
1.  In a boiling water reactor (BWR), the liquid that is turned into steam and sent to the steam turbine to generate electricity passes through the nuclear reactor.  These design don't include a steam generator.

3.  'Inconel' refers to a family of nickel based 'super-alloys' and the 690 material has better resistance to primary-water stress-corrosion cracking (PWSCC) than Inconel 600.  PWSCC had been seen with other pressurized water reactors and the steam generator replacement provided an opportunity to upgrade the tube material.

4..  Below is a brief analysis of the amount of electricity produced by each of the two San Onofre reactors and how much coal it would have taken to produce this electricity. 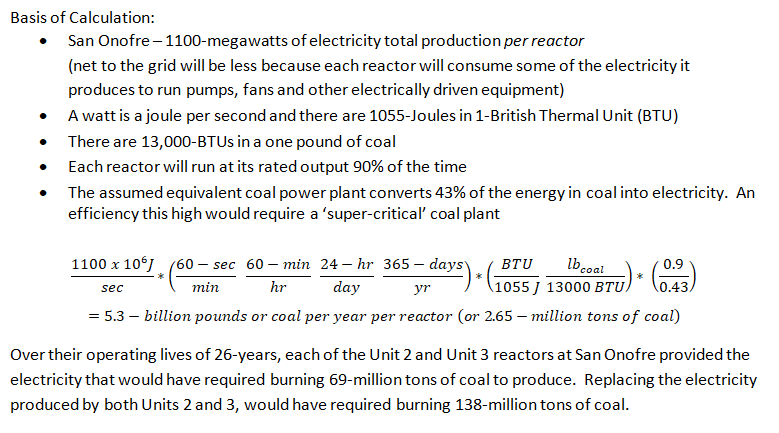