DISCUSSION:
Currently, the most unassailable conclusion in economics is the belief in the healing properties of a 2% inflation rate.  Not using a process any more rigorous than picking a number out of the air, the most powerful central banks in the world - including the Fed, the European Central Bank and the Bank of Japan - have all pursued unprecedentedly loose monetary policies in the interest of sparking 2% inflation.  For example, prior to the 2008 financial crisis, the Fed's balance sheet was $800-billion.  Currently, the balance sheet is $8.7-trillion, an increase of almost 1000%!  In addition, prior to the 2008, the Fed never owned a single mortgage.  Now, 13-years after Lehman, the Fed owns $2.6-trillion of them and is still buying more each month!  The only justification ever offered for these policies is they are needed to return inflation to its ideal level of 2%.

At this point it is worth nothing, that there is no ideal rate of positive inflation.  In fact, a healthy economy - by virtue of productivity enhancing capital investments - produces lower prices!  The best example of this is provided by the price of electricity.  For decades - from the 1920s into the 1970s - the price of electricity fell!  The price fell even as the use of electricity expanded and society become increasingly dependent on it.  See Figure 1. 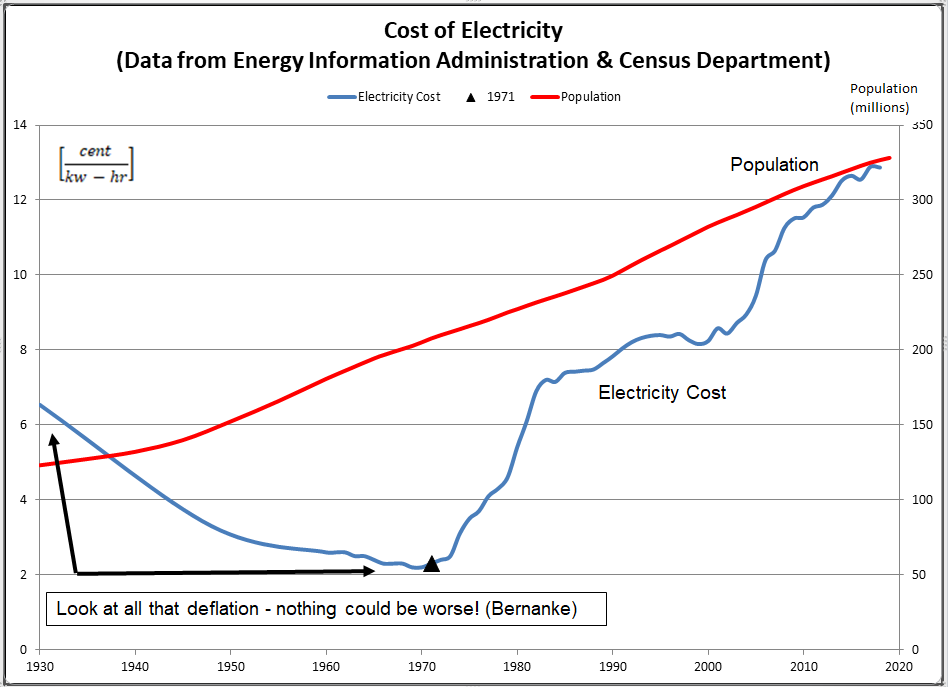 The transparently absurd notion of 2% inflation representing some sort of ideal isn't the first time economists tripped over the fundamental role prices play in an economy. In 1911, Irving Fisher - the first person to earn a PhD in economics from Yale and one of the most renowned economists of the time - began a 'stable money' movement in the United States.  Fisher believed the dollar's value should be held fixed against a basket of commodity goods.  (1)  Fisher's influence was so great, that he inspired a host of followers who became known as 'stabilationists.'  At its heart, the doctrine of the stabilationists was one of active intervention in the economy to maintain a constant value of the dollar and a constant price for goods.

Establishing constant prices as a goal for an economy is transparently absurd.  In fact, the only thing more absurd than the goal of constant prices is today's goal of prices rising by the magic level of 2% each year!  The ebb and flow of prices provides invaluable information to an economy.  As prices rise, more of a good is produced, while falling prices prompt less of a good being produced.  Prices - and profits - act like a traffic cop in an economy; directing resources to where they will produce the most benefit.  Constant prices will shunt the signals produced by changing prices and make it impossible for an economy to distribute resources to where they can be put to most use.  Here is the great Ludwig von Mises on the 'absurd' economics of constant prices;
"The gold standard is certainly not a perfect or ideal standard.  There is no such thing as perfection in human things.  But nobody is in a position to tell us how something more satisfactory could be put in place of the gold standard.  The purchasing power of gold is not stable.  But the very notion of stability and unchangeability of purchasing power are absurd.  In a living and changing world there cannot be any such thing as stability of purchasing power...." (2)

Of greater consequence than exposing a host of the supposedly brightest economists as a bunch of charlatans, the stabilationist doctrine greatly impacted the 1920's era Fed.  The theories of the stabilationists gave the Fed the intellectual justification for continuing to interfere in the market long after warning flags started to go up.  The Fed of the 1920's embarked on a completely unprecedented peacetime expansion of credit.  The term 'expanding credit' simply means increasing the reserves in the banking system.  The credit expansion was driven by the Fed's Open Market Committee (FOMC) - which only began operation in April 1923 - and not by consumer or business savings.  The Fed simply decided the economy needed more credit and proceeded to create this credit out of thin air.

The leading members of the Fed at the time - and their apologists ever since - routinely cite the fact consumer prices were not rising during much of the 1920s as evidence the Fed did not over-expand credit.  Indeed, just before the Depression broke, John Maynard Keynes praised the "successful management of the dollar by the Federal Reserve Board from 1923" as a "triumph" of currency management.  (3)  Much later, Milton Friedman claimed that the "high tide" of the Fed was its success in maintaining stable prices throughout the 1920s. (4)  To put Keynes' and Friedman's praise of the 1920's Fed another way, how could anyone accuse the Fed of overstimulating the economy when consumer prices didn't move for years on end?

The answer to this question is quite simple. The simple fact of the matter is a central bank's irresponsible monetary policies don't have to show up as rising prices for consumer goods.  Indeed, in the case of the 1920's Fed, there was a very good reason the Fed's disastrous monetary policies didn't show up as higher prices for consumer goods.  At the time the United States and much of the world was in the middle of something called the Industrial Revolution!

The Industrial Revolution was a revolution in productivity.  The increased productivity of the Industrial Revolution puts the productivity increases of today's 'high tech' era to shame.  As a result of harnessing different forms of energy, Man's physical burdens became much lighter.  A few machines could do the work of hundreds of people.  Heavy items could be loaded onto a steam-powered locomotive and moved effortlessly across the country.  Trucks could then distribute these same items to individual homes and businesses.  Electric motors drove pumps to provide irrigation to formerly barren lands or powered machines in factories to make production easier.  As early as 1887, the Bureau of Statistics in Berlin, Germany noted that steam engines alone were doing the work of 1-billion men; three-times the working population of the earth at the time! (5)

By harnessing all this mechanical and electrical energy and directing it toward productive ends, the production of goods exploded.  Not only did the production of formerly existing goods explode, but all sorts of inventions led to goods that never existed before.  All this increased production put a downward pressure on prices.  Because it was so much easier to produce goods and the quality of goods increased so quickly, it made perfect sense for the price to fall.  Regrettably, the downward pressure on prices from the Industrial Revolution was almost completely counteracted by the monetary policy of the Fed.  Instead of falling prices - which the productivity gains of the Industrial Revolution should have produced - prices for goods generally stayed the same because of the Fed's credit inflation.  In essence, the price decreases produced by the Industrial Revolution were matched by the price increases created by the Fed via its inflationary monetary policies.

The Fed's credit inflation most obviously manifested itself in the price of assets like stocks and real estate.  The productivity gains of the Industrial Revolution could do nothing to mask or mitigate the rise in asset prices during the 1920s.  From April 1923 - the start of the Fed actively intervening in the economy via the FOMC - through September 1929 - the eve of the stock market crash - stock prices rose from 101 to 381; an average annual gain of nearly 23%.  The rise in stock prices was being fueled - almost exclusively - by the Fed's disastrous monetary policies; the July 1927 conference of central bankers in particular.  (6)

Writing in 1934, the great British economists, Lionel Robbins, was fully aware of how the Fed's apparent success in 'currency management' and holding the price level constant had actually set the stage for an enormous, world-altering economic disaster.  Robbins wrote,
"From the point of view of the historian of the recent crisis, nothing can be more important than the propaganda for a managed currency.  It encouraged the belief that the stable-price level was the be-all and end-all of monetary policy...It led to an extravagant admiration of the policy of the Federal Reserve System at a time when the policy of the Federal Reserve System was sowing the seeds of the slump." (7)

John Wayne famously said, 'life is hard; it's even harder if you're stupid.'  Sadly, the Fed would prove itself stupid and repeat the exact same mistakes from the 1920s during the Greenspan and Bernanke eras.  Under the disastrous leadership of Greenspan and Bernanke, the Fed myopically focused on the relatively stable consumer price level and ignored the enormous run up in asset prices; first tech stocks and then housing.  The best evidence of this blindness to asset prices is provided by a speech Ben Bernanke gave on November 08, 2002.  The occasion of the speech was Milton Friedman's 90th birthday, and Bernanke spoke about the Great Depression.  In his speech, (8), Bernanke criticizes the 1920s Fed for raising interest rates in the spring of 1928.  Not only does Bernanke fail to mention the Fed's disastrous policies in the wake of the July 1927 conference of central bankers, which lit a fuse under the stock market, he claims in the spring of 1928 there wasn't the 'slightest hint of inflation.'

As Figure 2 below shows, Bernanke's assessment of inflation in the spring of 1928 - even with the benefit of hindsight - is completely wrong.  Sure consumer prices weren't going anywhere, but look at stock prices shooting straight up!  What better evidence of the Fed's massive contribution to today's bubbles could there possibly be than Ben Bernanke failing to recognize the exact same contribution the Fed made to the stock bubble that sparked the Great Depression. 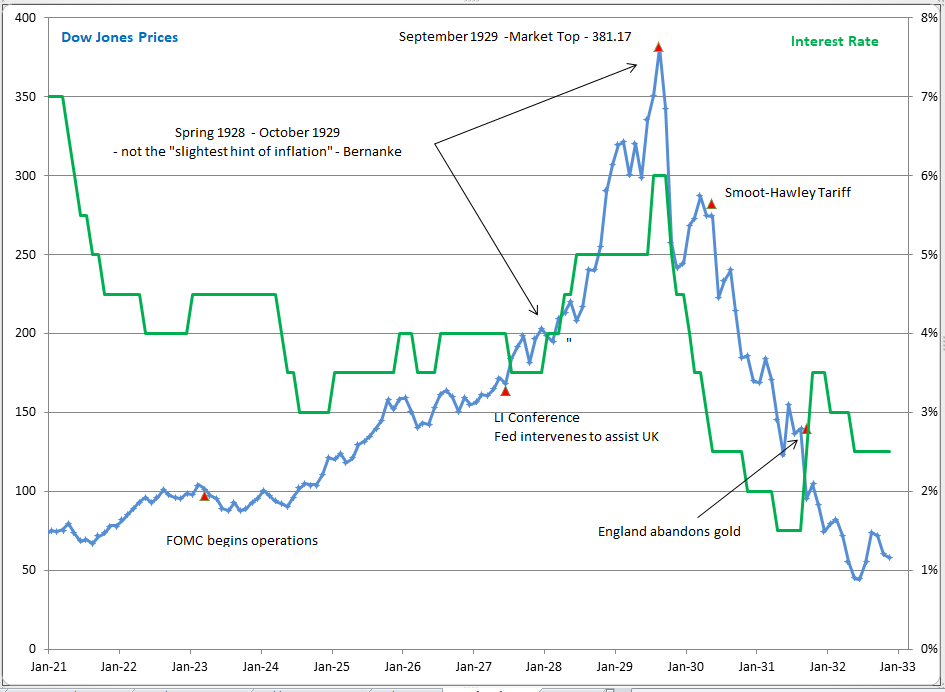 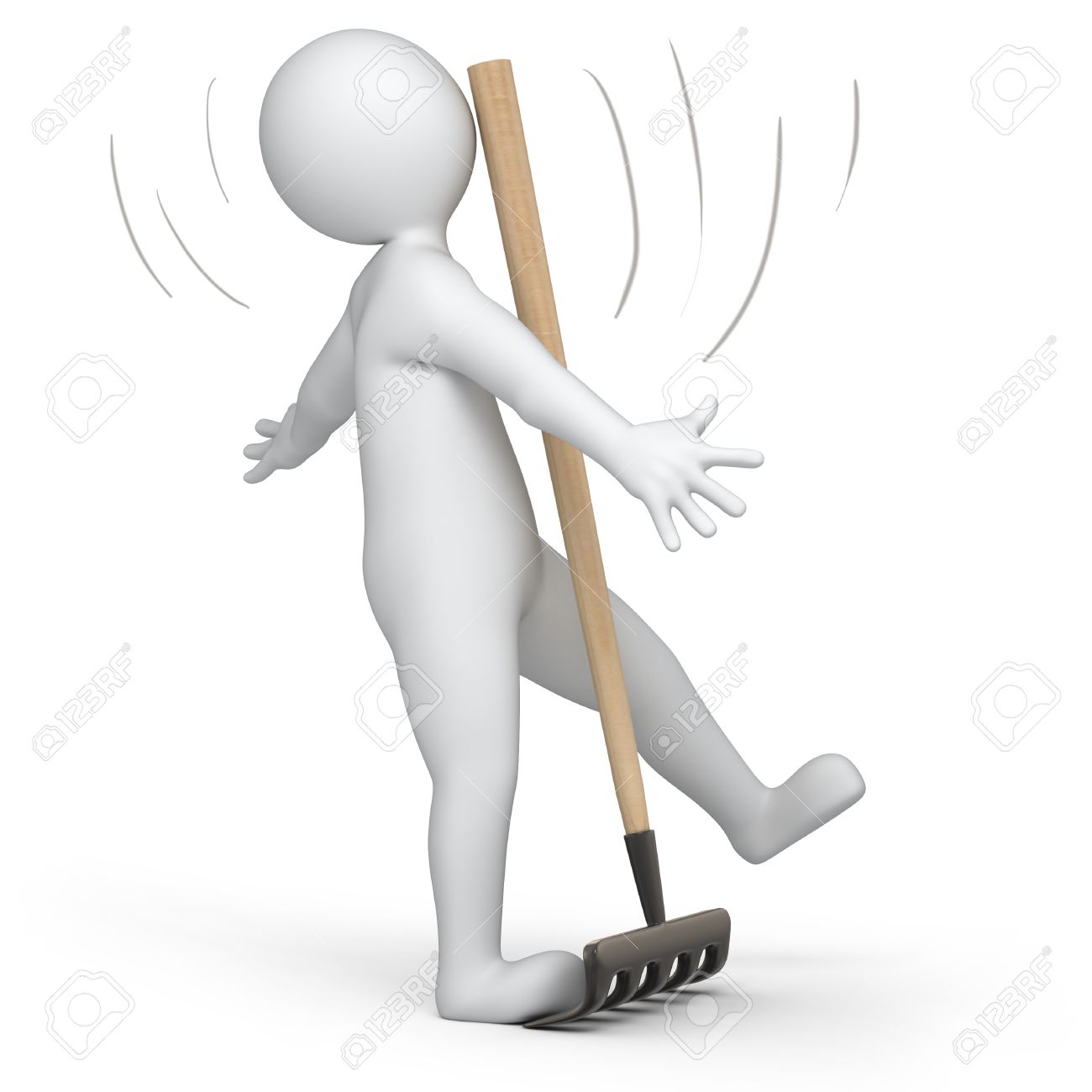 (6) The92ers.com, "The Federal Reserve and the Fatal Conceit of Economics - Necessary and Sufficient Conditions to Cause Enormous Economic Damage," September 30, 2018