SUMMARY:
Given the hostage crisis with Iran, it was hardly surprising that the US intervened on behalf of Iraq in its war with Iran; a war precipitated by Iraq's attempted land grab of the Shatt-al-Arab waterway.  However, the direct and indirect consequences of this intervention - which greatly lengthened the war and all its destructive effects - demonstrate that this intervention was massively counterproductive.  A straight-line can be drawn through the Iran-Iraq war, Iraq's subsequent invasion of Kuwait, the presence of western forces in Saudi Arabia, the 9-11 attacks and the invasions of Iraq and Afghanistan.  On this basis, the notion of intervening in a war for the simple reason that one of the belligerents is fighting an enemy of ours is often disastrously wrong.

DISCUSSION:
The Shatt-al-Arab waterway, essentially the confluence of the Tigris and Euphrates rivers had been a source of dispute between Iraq and Iran for decades.  However, in 1975 - facing turmoil at home - Saddam Hussein had agreed to Iranian sovereignty over the east bank of the waterway.  When Iran descended into its post-revolutionary chaos following the collapse of the Shah, Saddam Hussein attempted to settle the matter once and for all, this time by force.  On September 22, 1980, Iraq invaded Iran.  After some initial gains, Iraq's offensive ground to a halt.  By April 1982, Iranian offensives were pushing Iraqi forces back and, in May, Iran recaptured the strategically significant city of Khorramshahr.  By June, Iraq was asking for a ceasefire.  (1)

A non-negotiable condition for the Iranians was the removal of Saddam Hussein.  Not surprisingly, this was a condition, Saddam Hussein was unwilling to accept.  It was at this point that fate intervened.  Seething with anger at Iran and the hostage crisis, the United States threw a lifeline to Iraq when Iraq was on the ropes.  In February 1982, the State Department removed Iraq from its list of countries supporting terrorism.  While the US did not supply weapons to Iraq, it helped Iraq to borrow money from international agencies, arranged for food shipments and shared intelligence with Iraq.  The reluctance of the US to provide weapons to Iraq was not shared by other countries, most notably France.  In 1983, France loaned five Super Entendard jets from its inventory to Iraq.  France did so because it was worried about losing a subsequent sale of Mirage F1 jets to Iraq.  (During the Persian Gulf War, Mirage F1's would be the second most numerous aircraft in Iraq's inventory, trailing only the obsolete MIG-21.)

The Persian Gulf is correctly described as the 'jugular of the world economy.'  The Super Entendard jets France supplied Iraq had the capability of firing Exocet missiles.  The introduction of Exocet missiles, one of the world's most advanced sea-skimming anti-ship missiles, into this region was transparently absurd and self-defeating.  (2)  Unable to force a decision on land - in spite of employing chemical weapons - Iraq took advantage of its access to Exocet missiles and launched attacks on Iranian merchant shipping.  Iran responded in kind and soon a large scale 'tanker war' erupted.  Eventually hundreds of vessels were damaged and the resolution of the crisis required re-flagging foreign tankers as US flagged ships, and employing the US Navy as escorts.  Given the large number of ships in such a small area, the fog of war proved especially thick.  In May 1987 an Iraqi aircraft, likely a modified Dassault Falcon jet, fired two Exocets at the frigate, USS Stark.  Both missiles struck the ship but only the second missile's warhead detonated.  Nevertheless,  Stark nearly sunk and 37 crewmembers were killed.  Then in July 1988, the Aegis cruiser USS Vincennes mistook Iran Air Flight 655 from Tehran to Dubai for an Iranian F-14.  Vinceness fired two anti-aircraft missiles at the airliner; all 290 passengers and crew died.

By August 1988, both sides were economically and militarily exhausted, and agreed to a ceasefire.  (The muted response to the Iran Air disaster had demonstrated to Iran how isolated she was.)  By wars end, casualties on both sides were enormous.  It is reasonable to estimate at least 500,000 military fatalities between the two warring sides.  A huge fraction of Iranian casualties were to its child soldiers.  Raised in the immediate aftermath of the Revolution, they were filled with a deep sense of patriotism and zeal.  They were often required to complete the most dangerous task like clearing minefields and suffered enormous casualties while doing so.

FIGURE 1: The Direct Consequences of the Iran-Iraq War 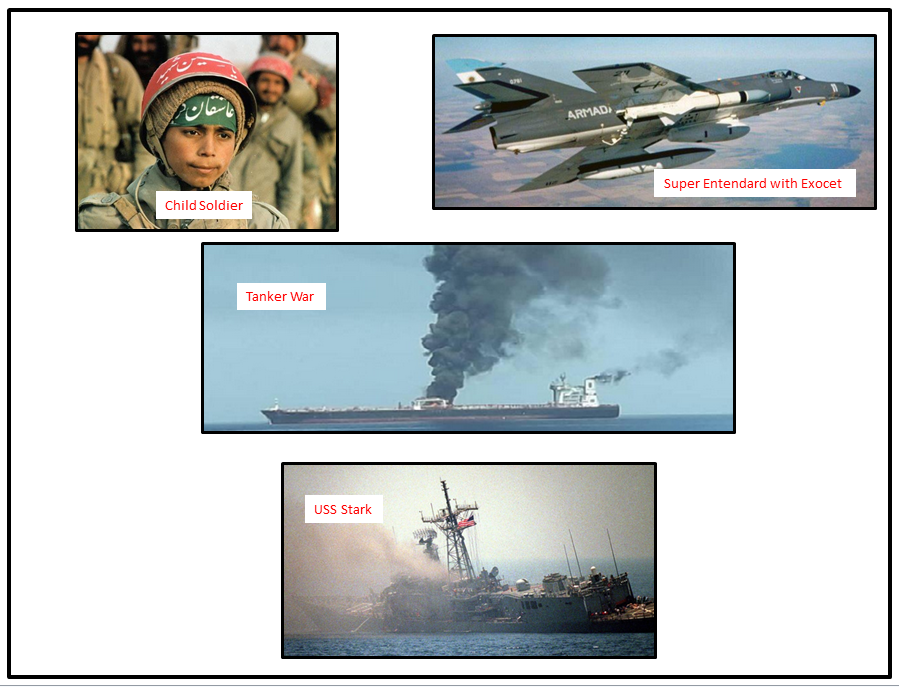 Indirect Effects:
It is the indirect effects of the Iran-Iraq war where the consequences start to snowball and increase exponentially in size.  As a result of its war with Iran, Iraq was essentially bankrupt.  Recall that in June 1982 - after less than two years of fighting - Iraq asked for a ceasefire.  It was then that western intervention on Iraq's behalf allowed Iraq to continue fighting for another six years.  In its eight-years of fighting, Iraq had borrowed huge sums of money from its Gulf neighbors.  With the war over, Saddam Hussein believed these war debts should be forgiven.  After all, in Saddam's mind Iraq had done the rest of the gulf states - especially Kuwait and Saudi Arabia - a tremendous service by fighting Iran.  Kuwait showed no interest in forgiving Iraqi war debt and continued to insist that Iraq pay in full.  From April 1990 on, Iraq accused Kuwait of engaging in economic warfare on Iraq.

Of course on August 2, 1990 Iraq invaded Kuwait and by August 8 had annexed Kuwait.  The prime motivation for Saddam Hussein's invasion of Kuwait was economic and the crushing war debts he knew Iraq could never repay.  So much for war being a great boom to an economy as economists would have us believe, (3).  However, Saddam seized on the history of the French and British in the Middle East and claimed that Kuwait wasn't a sovereign country, but the 19th province of Iraq.  (4)  Regardless of how this justification might have played in the Middle East, it carried no weight in Washington DC.  On August 08,1990 Operation Desert Shield was launched.  It would result in at least 500,000 foreign troops being placed in Saudi Arabia.  It was the presence of these troops that then motivated Osama bin Laden to launch the 9/11 attacks.  The 9/11 attacks would directly lead to the invasions of Iraq and Afghanistan.

CONCLUDING REMARKS:
Otto von Bismarck, the Prussian chancellor who united Germany, described preventive war as "breaking eggs out of which very dangerous chickens might hatch."  No one could possibly see the chain of events that led from the US interceding on behalf of Iraq in the Iran-Iraq war to the US invading Afghanistan and Iraq more than twenty years later.  (France failing to see the consequences of exporting Exocet missiles to Iraq in 1983 is a different matter entirely).   A policy of non-intervention doesn't require clairvoyance or telekinetic powers.  Instead, it simply requires accepting Bismarck's edict about eggs from which dangerous chickens might hatch.  As Bismarck concludes, intervening in wars without a compelling national security risk is always fraught with enormous risk and unknown.  Too often, the risks are dismissed with the simple belief that anyone fighting my enemy automatically becomes my ally.  The example of the Iran-Iraq war demonstrates that this simple belief is often disastrously wrong, and wrong in ways that are impossible to see in advance.

2.  Argentina only had a few, I think 6, Exocet missiles in its inventory at the start of the Falklands war.  This mere handful of missile wreaked havoc on the British Navy, including sinking the destroyer Sheffield.