Over the last two blog entries (07 and 14 JUL), the 'stabilationists' have been discussed.  It was their belief that an economy works best when prices remained stable.  In fact, maintaining stable prices became a 'be-all and end-all' of the stabiliationists.  Indeed, the Fed of the 1920s was singled out by the stabilationists as being particularly outstanding in this regard.  Many of the leading economists of the time - and many that came much later, Milton Friedman for one - also praised the Fed for its 'currency management' throughout the 1920s.  Among the economists who praised the Fed was John Maynard Keynes, the founder of modern economics, and thus the godfather to all the things modern economics gets wrong.

Of course, not long after the Fed received all this praise, the US stock bubble collapsed and economies worldwide descended into the most catastrophic economic collapse in history. (1)  This unprecedented collapse demanded some sort of explanation.  To his credit, Keynes admitted to being wrong about the Fed's monetary policies of the 1920s.  Writing in his 1930 Treatise on Money, Keynes admitted his focus on the 'index of prices' blinded him to clear inflationary signs in bank credit and stock prices;

"Anyone who looked only at the index of prices would see no reason to suspect any material degree of inflation, whilst anyone who looked at the total volume of bank credit and the prices of common stocks would have been convinced of the presence of an inflation actual or impending.  For my part, I took the view at the time there was no inflation in the sense in which I use this term.  Looking back in the light of fuller statistical information than was then available, I believe that whilst there was probably no material inflation up to the end of 1927, a genuine profit inflation had developed some time between that date and the summer of 1929." (2)

In the quote above, Keynes went about as far as he ever went to admitting a mistake.  The Fed of the Greenspan/Bernanke era immersed itself in nearly the same 'be-all and end-all' of monetary policy of the stabilationists.  The only difference - and it isn't particularly meaningful - is the stabilationists thought prices should remain constant, while Greenspan and Bernanke thought - remarkably, it must be said - prices should increase 2% a year.  The Fed of Greenspan and Bernanke allowed itself to be led down the same primrose path Keynes had erroneously followed.    The focus of today's Fed on its ideal of prices rising 2% a year blinded it to one enormous bubble after another; first in tech stocks (collapsed March 2000), housing (collapsed September 2008) and today's 'everything bubble (yet to collapse).  The chart immediately below should make this clear. 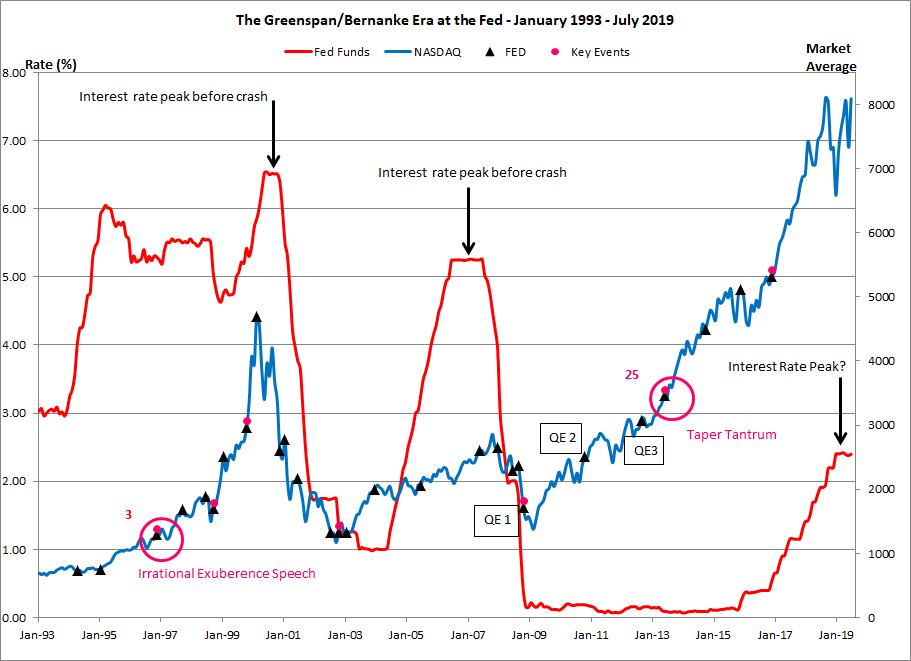 Writing in January 2005, just after the peak in homeownership but well before the collapse of the housing market, James Grant of Grant's Interest Rate Observer castigated the enormous arrogance and ignorance of today's central bankers;

"Supposedly the Great Greenspan has implemented a perfect measure of monetary stimulus.  He has averted deflation (falling prices according to the Fed, PCS), while steering clear of what the bond market might regard as a worrying rate of inflation (rising prices according to the Fed, PCS) Grant's has an alternate view, which requires a short definitional preface.  What inflation is not, we believe, is 'too many dollars chasing too few goods.' Pure and simple, it is 'too many dollars.' What the redundant dollars chase is unpredictable.  In recent months they have chased stocks, commodities, euros, junk bonds, emerging market debt and houses.  On Wall Street, such inflationary episodes take the name 'bull markets.' They are always welcome.  When, on the other hand, the surplus dollars chase skirts (or sweaters, or automobiles, or medical care), that phenomenon is called 'inflation.' It is usually unwelcome."  (3)

Just as in the 1920s, a variety of secular trends in today's era masked the Fed's disastrous monetary policies - at least as these policies might show up in the prices of consumer goods.  Just as in the 1920s, the disastrous monetary policies of today's Fed most obviously manifest themselves in asset prices - tech stocks, homes and government debt.  Until now, every time the Fed has been blinded by stable consumer prices and allowed an enormous asset bubble to blow-up as a consequence of its policy blunders, the bubble has ultimately burst.  Of course the last bubble to burst was the one in housing.  That bubble is dwarfed by today's 'everything bubble' which is perhaps best exemplified by trillions of dollars of government debt with negative yields.  The consequences of this credit bubble bursting will likely prove more far-reaching than the collapse of the housing bubble just over ten years ago.

ENDNOTES:
(1) The Great Depression was not an inevitable consequence of the stock bubble bursting, nor was it the result of the Fed's inadequate response to the bursting stock bubble. Regarding this latter point, how then was the US ever able to avoid anything remotely as catastrophic as the Great Depression when the US didn't even have a central bank!  The Great Depression evolved from the bursting stock bubble for many reasons; the massive and unprecedented government interference in business activities, the enormous amounts of unproductive wartime debts incurred by the British and French, and the enormous economic contradictions latent in the Treaty of Versailles.  Many of those who played enormous roles in bringing the United States to its knees in 2008 - notably  Ben Bernanke, Alan Blinder, William Dudley, Charles Evans,  Alan Greenspan, Frederick Mishkin and Lawrence Summers -  all argue the Great Depression proves the importance of a strong and active central bank.  The exact opposite is true; the stock market bubble that collapsed could have only grown to the size that it did because the Fed of the 1920s was so strong and active.  See the 'Dunce" biography of Alan Greenspan for more details on this.   http://www.the92ers.com/dunce/alan-greenspan