DISCUSSION:
Any one who has ever flown on a small aircraft should be familiar with an aircraft's weight and balance limits.  I worked on St. Croix for a year, and flying to the island always required a short flight from San Juan, Puerto Rico.  The plane was very small - it sat only five passengers, one of whom sat next to the pilot!  There were times where the airline instructed people to leave their luggage behind with the promise that it would be delivered the next day.  Typically, there was no issue with the plane's capacity to carry the weight; instead it was the result of the luggage having to be placed in a location that would upset the plane's limits on 'balance.'

This same phenomenon can be seen on a much larger scale with the C-17 aircraft and its ability to carry an M1 Abrams main battle tank.  See Figure 1.  While the M1 weighs 70-tons, the C-17's payload capacity is in excess of 85-tons.  From a purely payload or weight perspective, the M1 is well within the capacity of the C-17 to carry.  However, because the tank is relatively small in size relative to the aircraft, it has to be placed at a very precised location in the aircraft.  Specifically, the aircraft's center of gravity must remain forward and not be allowed to move too close to the tail.  As seen in Figure 1, both the aircraft's weight - including the cargo weight - and the lift generated by the wings tend to pitch the aircraft's nose down.  It is the force generated at the tail alone that tends to pitch the nose up.

As long as the plane's center of gravity remains close to the 'center of lift,' where the wings create lift, the tail will be capable of keeping the plane in balance.  The doomsday scenario for a cargo aircraft, particularly one tasked with carrying an enormously heavy item that isn't very large, is the heavy item breaking free and moving in flight.  A 'load shift' involving an M1 tank sliding to the rear of a C-17 during takeoff - which is exactly when such a load shift is most likely to happen - would quickly overwhelm the aircraft's enormous capabilities and skill level of the highly trained aircrew. 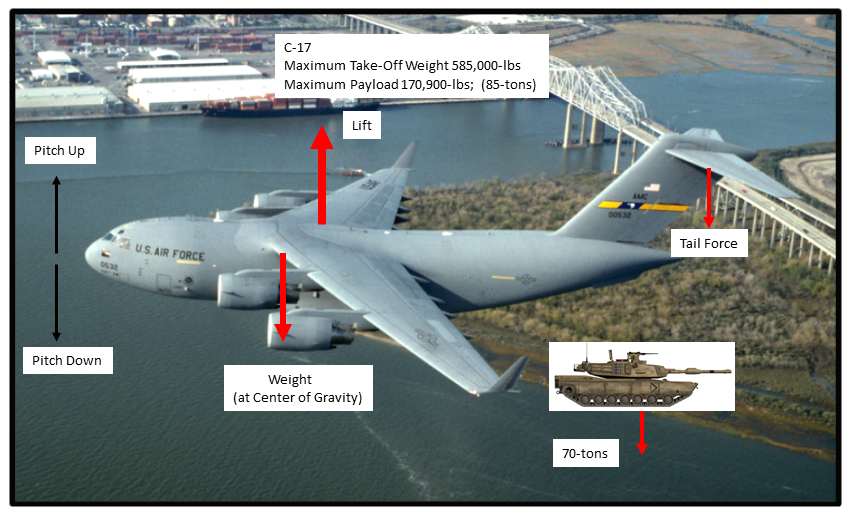 Benjamin Strong was the president of the New York Fed in the years before the Great Depression.  He is almost singularly responsible for asset prices unhinging themselves from reality and soaring toward the moon.  The most spectacular example of this was a meeting he organized of the world's leading central bankers.  The meeting was held in July 1927 on Long Island, and had a single purpose; to coordinate a world-wide policy of "loose money" to advance the interests of England.  The leaders of the central banks in France and Germany balked at the proposal.   Strong dismissed the concerns expressed by France and Germany as well as the concerns expressed by many in the US banking establishment with the retort, that the interest rate cuts he had in mind would amount to little more than "a little coup de whiskey for the stock exchange."  (1)

Of course, the animal spirits Strong thought would only run a little faster, ran completely wild.  Strong became seriously ill and died in October 1928 at just 55-years old.  In his absence, the Fed first tried a policy of 'moral suasion' to have banks stop loaning money for stock speculation .  When that failed, they raised interest rates to reign in the stock market that was obviously spiraling completely out of control.  It was to little avail and stock prices loosened themselves from any sort of rational basis.  At the valuations prevailing in October 1929, once selling began in earnest, the selling would soon feed on itself and prices would tumble - the market floated on a cushion of air.  The same animal spirits that saw stocks only going up would soon become consumed with man's most basic emotion - fear; and that fear would send prices tumbling.

The Fed is not a 'learning organization' and duplicated nearly all of the July 1927 mistakes in October 1998.  In September 1998, the hedge fund Long-Term Capital Management (LTCM) collapsed.  The Fed quickly organized a bailout and cut rates at its September 1998 meeting.  However, the Fed of Alan Greenspan was not done.  In what Bill Fleckenstein and Frederick Sheehan called "one of the most irresponsible acts in the history of the Federal Reserve," (2), on October 15, 1998 Greenspan cut rates between regularly scheduled FOMC meetings.

At the time of the surprise rate cut the NASDAQ was at 1611.  In a little over a year, November 1999, the NASDAQ soared to 2967, a gain of 84%.  In a final speculative blow-off the NASDAQ - doubtless fueled also by the passage of the Citigroup Relief Act -  reached 5000 in March of 2000, a 70% rise in just the four months since November, or over 210% since the surprise rate cut sixteen-months earlier in October 1998.  The enormous move came with a considerable headwind provided by raising rates.  Exactly as in the 1920s bubble, the rising rates of the 1990s proved no match for the imbalances created by the Greenspan Fed.  Indeed, as shown in Figure 2, the similarities between the 1920s stock bubble and the 1990s tech bubble are striking, right down to their excesses both being attributed to a central bank created imbalance. 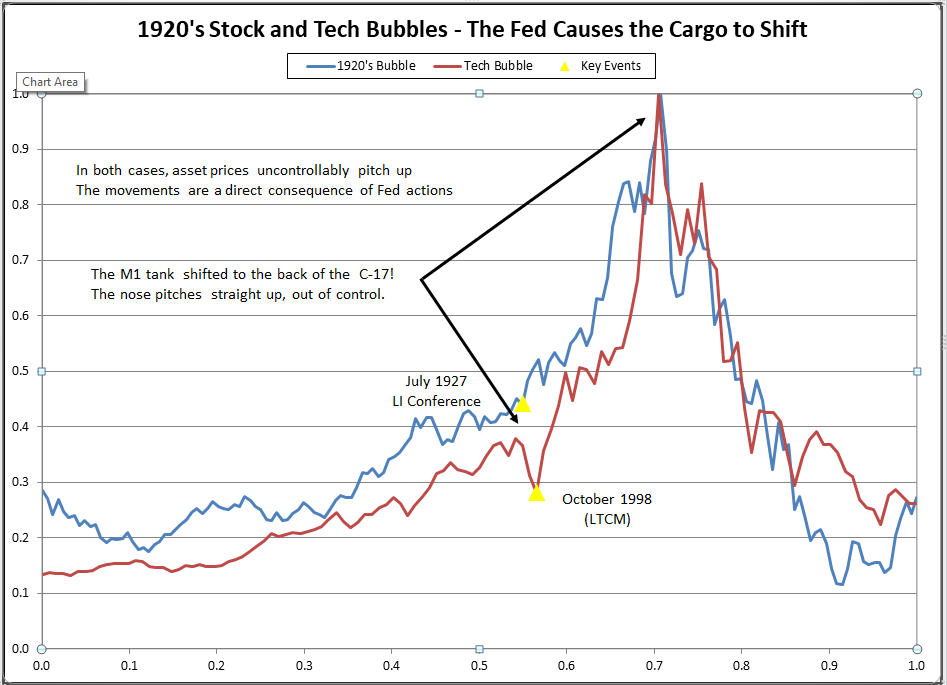 CONCLUDING REMARKS
As discussed here, what really set markets soaring in the 1920s and the 1990s weren't falling interest rates.  Instead, it was an enormous imbalance that Fed policies created in financial markets.  These imbalances are perfectly analogous to a 70-ton M1 Abrams tank shifting to the back of a C-17 aircraft on takeoff.  Just as a 'load shift' on a C-17 will throw the aircraft out of balance and pitch the aircraft's nose straight up, Fed policies upset the market's balance and stock prices pitched straight up.  The imbalances created by the Fed manifest themselves as the animal spirits that were convinced markets could only keep rising.  A market driven by animal spirits will only stop going up when these animal spirits have exhausted themselves - and animal spirits, by definition, will always exhaust themselves.   A consequence of these animal spirits exhausting themselves, is, once they have done so, nothing remains under the market to support the high prices.  As fast as prices rose, they fall even faster.

2.  William A. Fleckenstein with Frederick Sheehan, Greenspan's Bubbles - The Age of Ignorance at the Federal Reserve, McGraw-Hill, New York, 2008, p. 51