PREFACE:
The overriding theme of this website is the root cause of the financial crisis was a purely human factor; “the completely false sense of omnipotence, self-importance and entitlement among the country’s elite, as well as the nurturing of these beliefs at Ivy League colleges and other elite universities.”  Hillary Clinton does not merit a place among the “Confederacy of Dunces.”  (Her husband, of course, does.)  The discussion below shows Hillary Clinton displaying the defective mindset at the root of the financial crisis in a speech to the largest teachers union.  In particular, she uses this opportunity, not to address the disastrous performance of schools in our biggest cities, but to advance her own political prospects and naked quest for power.

DISCUSSION:
This past week Hillary Clinton spoke to what is almost certainly the democratic party’s most enthusiastic, (read rabid), and partisan base – the cynosure of the public school establishment, the American Federation of Teachers (AFT).  Outside of perhaps the entertainment and media empires, no special interest group is more important to the fortunes – read “finances” – of democrat politicians across the country than public employee unions, the teachers union in particular.  Among other things, she claimed that the infamous “they,” were trying to “rip the heart out of America.”  Amazingly – and given her widely derided “deplorables” speech – she had the supreme gall to conclude, “They want to turn us against each other.  They want to divide and conquer.”

For the great number of people only interested in the country’s well-being and not interested in politics, even more unnerving than Hillary Clinton’s shrill tone was the belief Hillary Clinton was using this speech as some sort of half-baked springboard for another run - #3 - at the White House.  Indeed, any democrat with any hope of running for president will – sooner or later – be forced to make the proverbial pilgrimage to the public education establishment’s altar, and offer a sacrifice to the teachers union.  To be sure, following Clinton, both Bernie Sanders and Elizabeth Warren will speak to the AFT.  In spite of the deplorable state of public education in this country – particularly in our largest cities – the likelihood of any of these democrat heavyweights taking the AFT to task for any of the myriad problems that plague public school education is nil.

In sharp contrast – and with considerably less fanfare and much more useful insight – Larry Elder and Dr. Walter E. Williams discussed public school education on a recent episode of Elder’s radio program. (1)  Unlike the politicians currying favor from a key constituency, Elder and Dr. Williams assembled facts and used these facts to make conclusions – regardless of whether the conclusions threatened the existence of political sacred cows or not.  In this discussion, they both cited the enormous paradox between the terrible state of public school education in our largest cities with the enormous power wielded by blacks and their nominal political allies – the democrats.  Here is Dr. Williams, "The K-12 education that most blacks receive is grossly fraudulent.  Most predominantly black schools are costly yet grossly inferior to predominantly white schools, and are in cities where blacks hold considerable power such as Baltimore, Detroit, Chicago and Philadelphia."

Listed below are some examples of the "grossly fraudulent" education that prevails in our largest cities;

Doubtless, if Hillary Clinton, Bernie Sanders or Elizabeth Warren were ever asked to comment on these obvious failings of public education in our largest cities, they would almost certainly sing from the song sheet provided them by the AFT.  In particular, the presidential aspirants would claim these examples – and the many more which could easily be cited – are proof positive of the fact that public education in this country is woefully underfunded.   However, some easily obtainable facts show that while big city public schools lack many things; money, however, isn’t one of them.

Chart 1, below, was created from data compiled by the Maryland Department of Legislative Services.  (6)  The chart shows the per pupil “revenue,” which is another word for taxes, in the various Maryland counties.  For the most part, taxes to support public education either come from local or state sources.  Local taxes are raised and spent by the various towns and cities.  State taxes are raised across the state, and distributed from the state capital, Annapolis.  The conclusions that can be drawn from this simple chart are of enormous consequence. 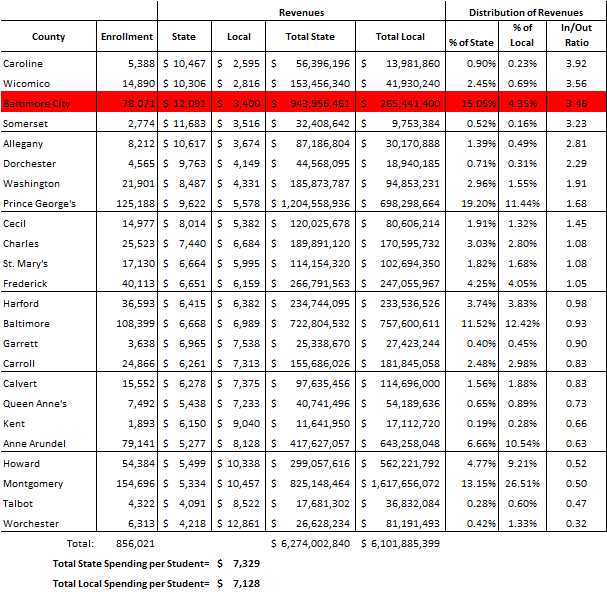 In other words, for every $1 paid by Baltimore into the total state revenue for education, Baltimore received $3.46! (15.05/4.35)  Only two other counties – both rural counties on Maryland’s eastern shore and both much smaller than Baltimore – had a more favorable “In/Out Ratio” than Baltimore.  The bottom line; in 2017 Baltimore public schools spent $16,942 per student!  The only Maryland county to spend more per student on education was the tiny county of Worcester; total student population of just over 6,000. (7)  The data here – which shows disproportionately huge sums of money pouring into Baltimore schools from all over the state – indicates that by the standard provided by all other counties in the state, Baltimore city schools are among the best funded schools in the state.  This data puts to lie the mantra of the AFT and their political messenger boys and girls – i.e. Hillary Clinton, Bernie Sanders and Elizabeth Warren - that big city schools are chronically unfunded.

Hillary Clinton could have used her opportunity of meeting with the AFT to discuss the state of public school education in large cities – all of which are dominated by democratic party machines – and challenging the clearly bogus notion that these schools are underfunded.  Instead of that long overdue discussion, she used the opportunity to advance her political fortunes.  Congratulations Hillary; while you are not among the movers and shakers in the Confederacy of Dunces, you display the exact same defective mindset.  Hopefully, and unlike them, you will never again be in a position to put that defective mindset into action.

(7) Ibid.  See page 88 for per student spending by county; the city of Baltimore ranks second in the state.