DISCUSSION:
Today is July 4th - Independence Day in the United States.  It is the day our Declaration of Independence was signed, and is considered to be the day the United States came into existence as a sovereign country.  Certainly, by an relative standard of freedom, the United States is among the first rank of countries in the world.  However, this isn't to say that the United States is completely free or free of the peculiar brand of economic tyranny that plagues the modern world; the tyranny of central banks.  From a US perspective, this tyranny will be demonstrated by the Cantillon Effect and the society eroding forces central banks have unleashed via this effect.

The Cantillon Effect - the namesake of Richard Cantillon, an eighteenth-century economist - describes how prices change as a consequence of a change in the money supply.  Milton Friedman, the twentieth-century monetarist economists - famously said, "inflation is everywhere and always a monetary phenomenon."  Friedman's insight captures the common sense notion that if the money supply increases at a rate much faster than the economy is growing, then prices will rise.  However this observation doesn't provide any real insight into which prices change first or which prices change the most.  It is the Cantillon Effect that captures these important 'distribution' aspects of a money inflation.

The Cantillon Effect describes that the prices that lie closest to the creation of new credit money will increase first and the most  Those prices that are the most far removed from the creation of credit money will only begin to rise much later in the credit cycle.  Not only will these prices rise last, they will rise the least.   Perhaps the best way to demonstrate the Cantillon Effect - and the corrosive impact it has on not just the economy but society as a whole - is with an example.

More spectacular than the 2018 sales price of $45-million, was the fact that the apartment was purchased for 'only' $7-million in 1990.  In twenty-eight years the price rose 540%!  Contrast that with how fast the price of electricity and wheat rose over those same 28-years.  The price of electricity rose 67% and wheat inched up just 6%.  More important than these statistics measured in dollars and percentages are those that are measured in sweat and effort.

Instead of accounting for price changes with dollars, much more can be gleaned by valuing 145 Central Park West in terms of food and electricity.  The results of this exercise can be seen in Table 2.  (1)  Note how much more valuable the apartment is in terms of wheat production or electricity generation.  In 1990, the apartment was worth the output of 52 Kansas farms.  Twenty-eight years later, the apartment - in spite of nothing more than some simple remodeling and a couple coats of paint - was worth the output of 315-farms.  In terms of electricity, in 1990 the apartment was worth six-days of power plant output, but in 2018 its value had skyrocketed to twenty-four days of output.  (2)  Figure 1 captures all this. 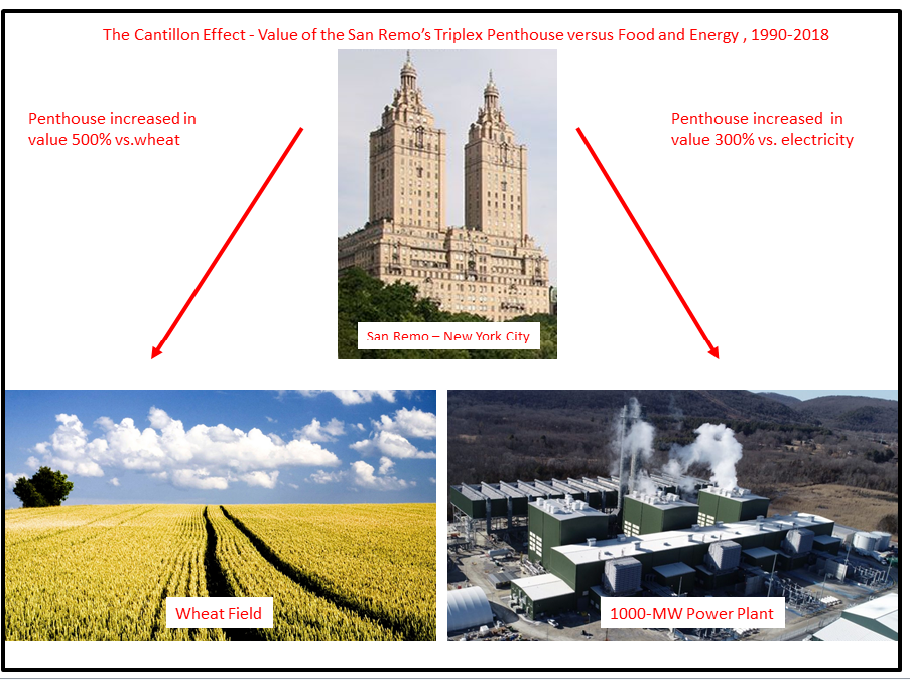 CONCLUDING REMARKS:
The brief discussion here couldn't be more important and goes far beyond demonstrating a simple economic concept, the Cantillon Effect.  The discussion demonstrates the ruinous impact of inflation on an economy and a society.  Anyone whose wealth is related to the prices of items far removed from the creation of credit money - for example the hard-working people who keep the lights on and feed us -  are falling behind the select few whose wealth is captured in assets.

To be sure, in capitalism the fact that a good is required in society doesn't mean that everyone can make a profit selling it, nor does it mean that wheat farmers should make more money than movie stars.  (The San Remo building is a celebrity favorite in New York.)  However, a society that allows wealth to concentrate among an asset owning class at the expense of impoverishing those doing the actual production that society relies on, has a fatal flaw in its economic system.  This flaw - which is clearly demonstrated here -  has nothing to do with capitalism or free markets.  Instead, it has everything to do with the system of crony capitalism the Federal Reserve has - with hardly any opposition - foisted upon the United States.

So, while all American have much to celebrate on this and all Independence Days, freedom from the tyranny of central banks isn't among them.

1.  "Rock, Paper, Scissors it Ain't: More on How the Fed Fertilizes the Rich Man's Field with the Sweat of the Poor Man's Brow."
http://www.the92ers.com/blog/rock-paper-scissors-it-aint-more-how-fed-fertilizes-rich-mans-field-sweat-poor-mans-brow

2.  The apartment is being valued on the basis of output, not the profit a farmer might earn from selling crops or a power plant would earn by selling electricity.  If we assume a 5% profit margin for wheat farming and electricity generation and we want to value the apartment in terms of profit from these activities, then we need to multiply the figures in Table 2 by twenty!