Whenever there is an economic slowdown, there is always a cry for "stimulus spending" by government to help counteract the downturn's effect.  The idea is people who would otherwise be unemployed should be put to work for local, state or federal governments.  Not only will the people working on the project have money to spend, but all sorts of 'infrastructure' will be built.  Like most of what constitutes economic thinking today, this thinking is all wrong.  The belief in infrastructure or stimulus spending simply confuses the increased circulation of money with a wealthier society.  This will be demonstrated using the example provided by the 2004 Athens Olympic Games.

In general infrastructure projects acquire economic value in one of two ways; by either increasing the productive capacity of a country, or providing a a service that the citizens of a the country are willing and able to pay for.  Examples of the types of infrastructure that increase the productive capacity of a country are of course roads and ports.  Roads acquire value by virtue of the goods that pass over them and ports acquire value by virtue of the goods that pass through them.  When roads and ports allow more goods to be produced and exchanged, then these roads and ports add real economic value.  As such, roads and ports of this type are worthwhile investments.  On the other hand, while a new international airport may help to increase trade between a country and the rest of the world, its main benefit would appear to be to provide individuals the means to travel.  Provided that a society is becoming increasingly wealthy, many people may be willing to pay to satisfy what would seem to be a common desire among all people - to travel to new places.  As part of a country becoming wealthier, it is likely additional international airports would have to be built to satisfy the increased demand of citizens wanting to travel abroad.

In either case of increasing a country's productive capacity, (roads and ports), or providing citizens the opportunity to enjoy the increased fruits of their labor, (international airports), infrastructure projects do not acquire economic value because building them consumed resources or cost money.  Instead, infrastructure projects are equivalent in every way to the 'investments' that private firms make in factories and new machines.  Companies only invest in capital projects when the 'return' on the investment is sufficient to cover the companies cost of capital.  In fact, a variety of techniques - net present value, payback period, and internal rate of return among several others - have been developed to assess whether an investment makes financial sense or not.  Indeed, the process of "capital budgeting" - which is the term used to describe how a company makes decisions around capital investments - is the most important task of any company's senior management.  This importance was best summarized by Peter Drucker, who said, "Management is doing things right; leadership is doing the right things."  Capital budgeting done properly ensures the right things are done.

Fully consistent with the theory that public works projects should be held to the same economic standards that a private company would use to make capital investments is provided by Greece and their 'investments' in the 2004 Olympic Games.  A significant factor in Greek insolvency is the massive debts the government incurred to build the various facilities for the 2004 Athens Olympic Games.  Thousands of workers were employed to build not just the Olympic venues, but new roads and a huge expansion of the Athens airport.  Companies were paid hundreds of millions of dollars to provide raw materials.  The total cost of all this "investment" in Olympic infrastructure was around $11-billion.  (On a per capita basis, the equivalent infrastructure "investment" in the United States would be over $300-billion.)  What could possibly be wrong with this?  Think of all the money the people have to spend!

Well, it turned out it was all wrong.  Once the Olympics were over, the various Olympic venues had no economic value because they had no capacity to generate revenue.  As a result, the debts that were incurred to build these facilities could not be paid back with revenue from the Olympic venues.  Because of a government rife with corruption and political rot - which, amazingly, even includes a strong communist presence - along with a long-standing tradition among the wealthiest citizens to simply not pay their taxes, there was no other revenue for the government to pay for all the Olympic facilities that couldn't pay for themselves.  As a result, the completely dubious, money-squandering nature of the "investment" in Olympic infrastructure became immediately clear for the entire world to see.  See Figure 1.

Figure 1: (Beach Volleyball Venue & Aquatic Center from the Athens Games: During & After) 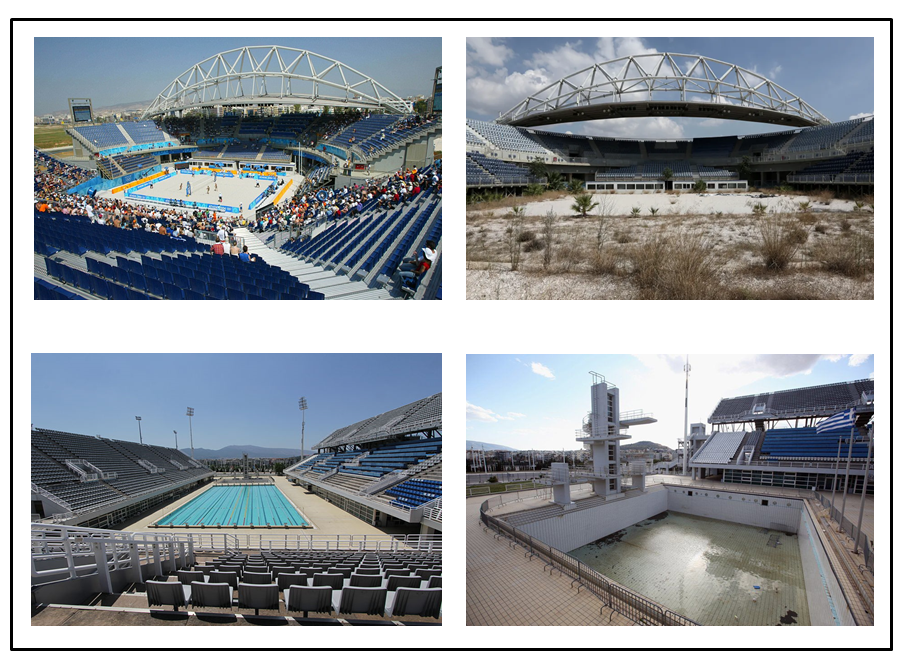 Of the spending on Olympic infrastructure, Dimitris Madras, an economics professor at Aristotle University said, "It was a waste of money all all for show."  His accurate assessment of the wasteful nature of the infrastructure spending was matched by the common sense of a common Greek citizen, Eleni Goliou.  When asked if Greece was planning on any celebrations to mark ten years since the Athens games, she remarked, "Celebrate?  For what?  They spent money they didn't have - our money, taxpayer's money - on a big party.  You see any money left for a celebration?" (1)

Concluding Remarks:
The example provided by the Athens Olympic Games should make it clear that a public works project or government 'stimulus' is no different than any capital investment by a private business.  The infrastructure spending will only make sense if it generates enough revenue to pay for its cost.  If a project - public or private - can't pay for itself, then it should not be pursued; regardless of how many people the project might put to work for a short period of time.  Like much of modern economics thinking, the proponents of public works spending as a means to increased wealth get cause and effect backwards.  Wealthy countries have an impressive physical infrastructure because they are wealthy; countries don't become wealthy by building a strong physical infrastructure.