The Federal Reserve's Open Market Committee (FOMC) recently announced a significant policy departure from what had been its determination to increase interest rates and to unwind the Federal Reserve's balance sheet.  In September 2008, the Fed's balance sheet was about $800-billion.  The assets on the Fed's balance sheet are the Treasury bonds and other financial assets the Fed holds; the liabilities are the dollar bills people carry in their pockets and hold in reserve in their bank accounts.  As a result of the financial crisis, the Federal Reserve - via its Quantitative Easing (QE) program - created about $3.7-trillion out of thin air to purchase distressed assets from banks and mortgage companies like Fannie Mae and Freddie Mac.

With the financial crisis believed to be over and, assuming the assets the Fed purchased in 2008 were actually worth something, the Fed should be able to sell these assets back to the banks and mortgage companies they purchased them from.  Of course, as recent events make clear, these assets are not worth anywhere close to what the Fed paid for them.  The Fed's inability to gets its balance sheet much lower than $4-trillion  and interest rates above 2.25% without threatening a stock market collapse prove this - conclusively.  It also proves that this magazine photo lauding Ben Bernanke as a economic hero and savior was premature in the extreme. 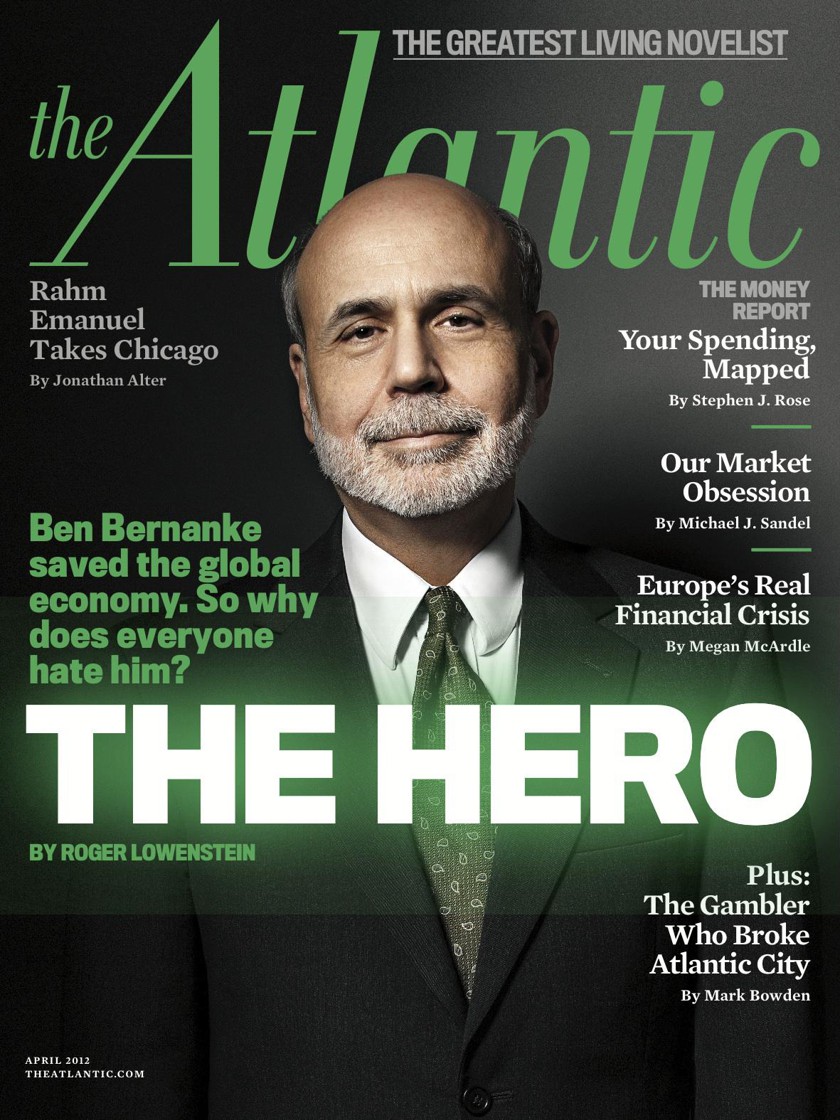 Political and economic commentators - who remain, far and away, the last people to consult when looking for accurate and actionable information - have spent the past week or so discussing whether the Fed's policy u-turn was the result of President Trump browbeating Fed Chair Jerome Powell.  This discussion misses the most important aspect of the Fed's policy u-turn; it is the most recent manifestation of the spectacular failure of the Greenspan/Bernanke era at the Fed.  What is going on in the markets now has nothing to do with Donald Trump, Jerome Powell or the Fed's recent change in policy.  The markets are still reacting to the appalling legacy left to us by Alan Greenspan and Ben  Bernanke.

The Federal Reserve of the Greenspan/Bernanke era was the economic equivalent of dropping a neutron bomb on the United States.  The structural edifice of the country remained in place but the casualties suffered by the population - at least the population not comprised of Wall Street investment bankers - were enormous.  The Greenspan/Bernanke era exacerbated the income inequality that has been growing since the current 'age of inflation' began in the early 1970's.  Because he was still a public figure when the low interest policies he championed in response to the bursting of the tech bubble led to the housing bubble and subsequent financial crisis, Alan Greenspan's reputation has suffered - at least in some circles.  Ron Paul labeled his testimony in front of the congressional committee looking into the financial crisis 'pathetic.' Other well-known Fed skeptics like Jim Grant and Bill Fleckenstein have also cataloged Greenspan's many blunders and inconsistencies.  On the other hand, the talking head, stock market cheerleaders at CNBC still reverentially refer to Greenspan as 'Mr. Chairman.'

Bernanke, of course, is still feted as a conquering hero.  You don't need any more proof of this than the Atlantic cover above.  The story goes that by pursuing unprecedented policy options in response to the financial crisis, Bernanke single-handedly prevented a repeat of the Great Depression.  This version of events fails to acknowledge the leading role he played in causing the crisis in the first place.  It also ignores the very real problem - discussed above - of how the Fed can ever reduce its balance sheet which grew by a factor of five in response to the crisis and is now still close to $4-trillion.  In addition, other critics, like the successful hedge fund investor Stan Druckenmiller, have called Bernanke's QE program, "the biggest redistribution of wealth from the middle class and the poor to the rich ever."  To put it another way, Ben Bernanke is not a heroic fireman who goes into a burning building to save an infant.  Ben Bernanke is an arsonist who burns down the homes of poor people so rich slumlords can collect the insurance claims.

Defenders of Greenspan and Bernanke routinely cite how "smart" these men are.  They cite such things as Greenspan's long tenure as an economic consultant or Bernanke teaching himself calculus as a teenager because his high school didn't offer it.  What these people fail to realize is, regardless of any academic credentials held by Greenspan or Bernanke,  once Greenspan and Bernanke accept the incorrect notion that a small group of people, like the FOMC, is smart enough to decide what interest rates should be in an economy as large as the United States, it doesn't matter what they get right after that.

In other words, once people of Greenspan and Bernanke's ilk get the decision wrong on the benefits of central planning - which is what central banking has become - it doesn't mater what they get correct afterwards.  The die is cast and it will only be a matter of time before a new crisis emerges from the policy response to a previous crisis.  For example, the housing bubble emerging from the Fed's response to the collapse of the tech stock bubble.  It is clear that in the time since President Nixon closed the gold window and greatly increased the power and discretion of central bankers/central planners like Greenspan and Bernanke, the country has lurched from once crisis to another, and the wealth of the country has been concentrated like never before.

Indeed, this notion of the economy lurching from one crisis to another perfectly describes the stock market action from late 2018 until now.  As the Fed of Jerome Powell attempted to unwind just a tiny portion of the Fed largess of the Bernanke era, the stock market went into a tailspin and fell 17% in just three weeks (03 - 24 DEC).  The Fed's subsequent reversal of policy, announced this week, and the general consensus that the Fed will start cutting rates again, instead of raising them, has nothing to do with anything that transpired between Jerome Powell and Donald Trump.   Instead, all this is merely a reflection of the economy trying - unsuccessfully - to accommodate all the distortions Bernanke imposed on it.

Isn't this exactly what is seen in the chart below?  Each new radical Fed intervention to account for a bubble bursting produces a bubble even larger than the one that just burst.  The tech bubble collapsing prompted the Fed to blow up a housing bubble.  The bursting of the housing bubble then prompted the Fed to blow up today's 'everything' bubble.  As each bubble was blown up, interest rates peak at lower and lower levels.  When the chickens of the Fed's post-2008 interventions come home to roost - don't blame Jerome Powell or whoever else is running the Fed at this time - be sure to blame Ben Bernanke, his cover on the Atlantic notwithstanding.

When it comes to creating bubbles and distorting the economy beyond recognition after these bubbles collapse, lackeys like Jerome Powell are mere shadows; Alan Greenspan and Ben Bernanke are the sun. 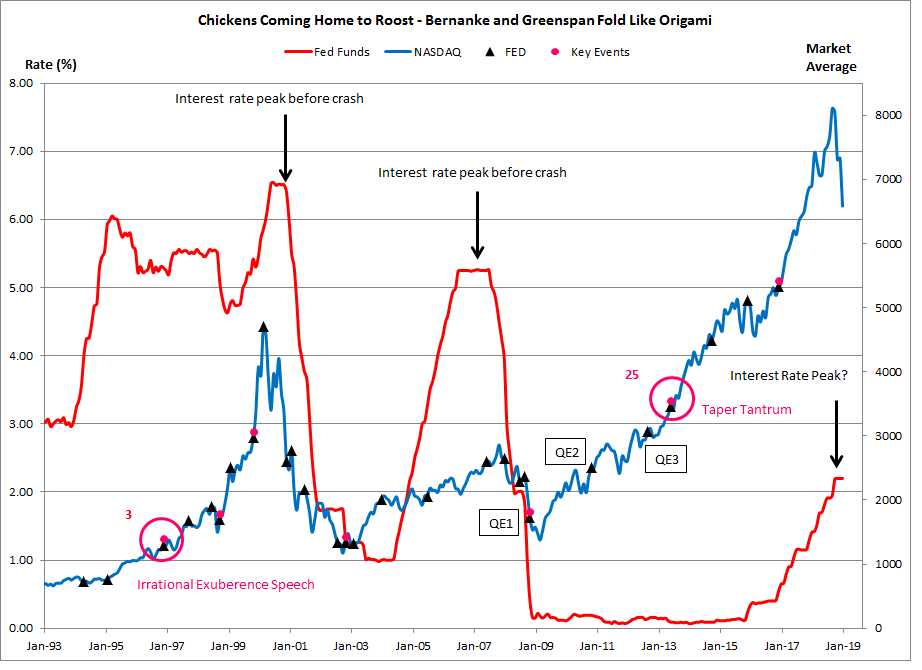