The classic role of finance in an economy was limited but incredibly important.  In its classic role, financial services firms - primarily commercial banks - accumulated savings generated by society and directed them to the capital needs of business, the productive elements of society.  The resulting capital investments led to increased production and a higher standard of living.  Indeed, it is the conversion of savings - in other words, capital - into higher levels of production that led to the name 'capitalism' in the first place.

A good description of the importance of this capital formation - built as it is on savings, or production in excess of consumption - to society is provided by economist and banker, Dr. Benjamin Anderson,
"Capital is created when men produce machinery instead of hats and shoes and ice cream, when men build bridges and railroads instead of making phonograph records.  Capital consists of producers' goods, of instruments used in further production, instead of commodities destined for immediate consumption.  The growth of capital is a factor of first importance in the progress of civilization.  Capital increases when the community produces more than it consumes.  Capital decreases when the community consumes more than it produces." (1)

A good example of a "producers' good" is the 14,000-ton open die press pictured in Figure 1.  This machine can forge 600-ton ingots into near-net-shape final products.  Machines such as this - and the one picture here is one of the largest in the world - are used to manufacture, among other things, turbine rotors.  See Figure 2.  These rotors are used to generate electricity and thus form - without exaggeration - the foundation upon which all modern societies are built.  Without open die presses like this and the ability to machine the forgings they produce into turbine rotors, life as we know it today would be fundamentally different. 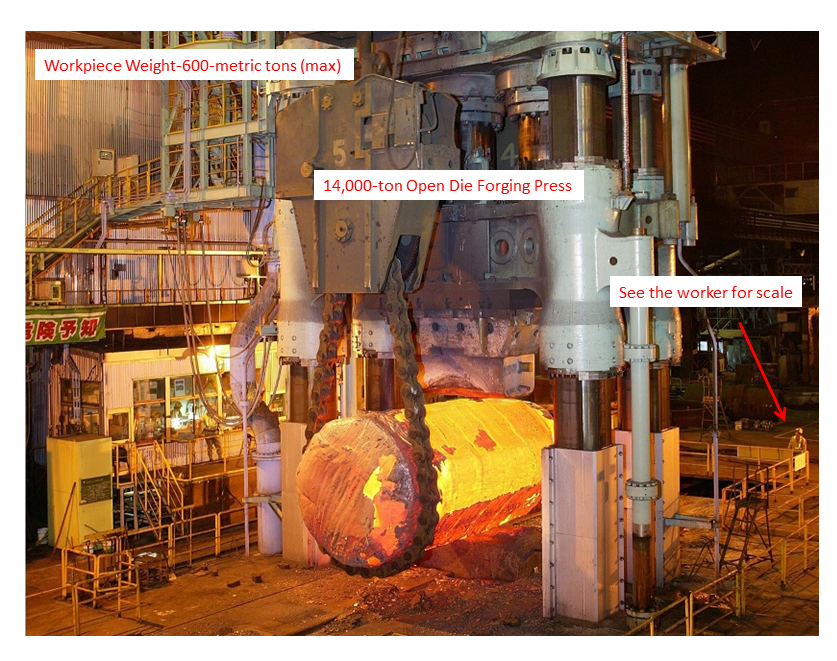 An interesting contrast with Figure 2 - which shows the quiet professionalism of workers who draw deep satisfaction from their work - is provided by Figure 3, the day Goldman Sachs went public.  Henry Paulson, Goldman CEO at the time, is pictured on the far right of Figure 3.  Paulson and the other Goldman employees on the podium have a right to be so happy - regardless of whether any of them draws professional satisfaction from their work.  Goldman going public was an enormous windfall for all them.  Paulson alone earned hundreds of millions of dollars at Goldman, the vast majority of which came as a direct result of Goldman going public.  Paulson's total Goldman compensation would easily pay for an open die press of the type depicted in Figure 1 with hundreds of millions left over.  This fact naturally begs the question, what is a better use of investment capital - purchasing an open die press of the type shown in Figure 1 or paying Henry Paulson to be Goldman CEO?  More generally - and perhaps a better question to ask - who did more to advance society's interest; the machinists in Figure 2 or the investment bankers in Figure 3? 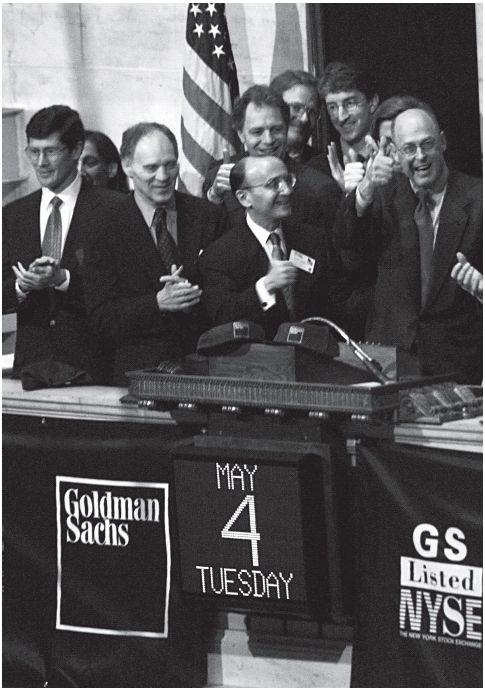 In a true, free-market capitalist system based on hard money, trying to distinguish the contribution of machinists (Figure 2) from bankers (Figure 3) wouldn't be possible.  The contributions of the two groups of workers would be completely intermingled, and their respective contributions could never be untangled from each other.  The machinists, all their technical skill notwithstanding - would be hard pressed, (pun intended), to finance the purchase and installation of such a large piece of equipment as the open die press in Figure 1.  Without the machinists and the value added work they do, the bankers would have few places to invest money were it could produce a positive rate of return.

Of course today, with a purely fiat money supply and the accompanying financialization of the economy, banking is now completely divorced from the real productive parts of the economy.  It is no exaggeration to state that finance is no longer a means to an end, (increased production); instead finance is now an end in itself.  Indeed, there is no better example of finance becoming an end in itself than Goldman Sachs going public on May 4, 1999.  Historically the Wall Street investment banks were partnerships; it was the partners' money that was at stake.  As a result, when investment banks were private partnerships they were conservatively managed.  All that changed, when these banks went public.  Now it was the public's money that was at risk.

Not only was caution thrown to the wind, but Wall Street devolved into the zero-sum game today, totally divorced from the real economy.  No longer did investments produce winners on both sides of a transaction.  Now for every winner there had to be a loser.  The best evidence of this zero-sum game - as well as Wall Street divorcing itself from the real productive parts of the economy it used to be fully immersed in - are the derivative trades around mortgage bonds.  The derivative products that were traded could only be created after the mortgages had been issued.  In other words, the hundreds of billions of dollars in mortgage derivative trading didn't finance the construction or purchase of a single house!  Yet it was this trading that (supposedly) threatened to bring the country to its economic knees!

Writing during the Great Depression, Dr. Benjamin Anderson reflected on how banks had squandered their 'long and honorable' record and, in doing so, contributed greatly to the economic disaster then unfolding.
"The speculators lost their heads.  To too great an extent, the investment bankers did.  American investment banking had a long and honorable record.  Investment banks had been for decades the intermediaries between railroads and industrial corporations on one hand, and the investing public on the other.  They had underwritten billions of dollars' worth of securities, which had placed billions of dollars from the American investing public into sound and profitable uses in building up the railroads and and industries of the country.  They had been critical of the credits they extended.  They had insisted upon sound policies on the part of the corporations for which they were obtaining their investors funds.  They had been concerned about their reputations.  They tried hard not to put out unsound issues, if only because they wished to be able to sell other issues in later years to the same investors.  They had done their work well.  But with the great flood of cheap money, and with insatiable demand for stocks and bonds, their perspective and their credit standards began to relax as early as 1925.  And with the renewal of cheap money in 1927, perspective was badly lost and credit standards suffered a great deal."  (2)

Anderson's epitaph for conservative banking in the 1920s is equally fitting to what happened in the wake of the Wall Street investment banks going public.  After the debacle of the 1920s and 1930s, the banking establishment returned to its conservative roots.  In sharp contrast, after the 2008 debacle banks today have even more completely divorced themselves from the real economy.  The Wall Street banks in particular continue to throw caution to the wind as assets of all types unmoor themselves from anything remotely resembling a historical basis of value.  Rather than expressing skepticism towards the Federal Reserve's explicit and implicit backstops of asset prices, Wall St. banks today constantly clamor for more 'stimulus' or 'liquidity' from the Fed.  As Anderson observed, banking has a long and honorable record.  It also performs a critically important role in the functioning of free markets.  No one should confuse banking's long and honorable record or the critical role it serves in the economy with banking as it now exists after Goldman Sachs went public.