DISCUSSION:
Conventional thermal power plants in Texas - coal and gas - have been undermined economically and operationally by the enormous subsidies provided to wind energy.  The subsidies undermine the ability of these plants to make money, the economic aspect, while also requiring these same plants to provide the huge increases in electricity generation necessary to deal with the searing Texas summer heat, the operational aspect.  These economic and operational impacts will be briefly discussed here.

Economic Aspects:
Wind energy in Texas is primarily subsidized via two programs - the PTC and CREZ.  The PTC is a federal program that subsidizes wind generated electricity at a rate of 2.3-cents per kilowatt-hour (kw-hr).  CREZ was a state program to build approximately 3,500-miles of transmission lines to move wind generated electricity from sparsely populated areas of the state to large cities like Dallas and Houston.  (1)  For some perspective on this effort, it is useful to note that the driving distance between New York City and Los Angeles is 2800-miles.  The CREZ construction effort was completed in 2013 at a cost of $7-billion.  From 2013 -2020, wind generated 459-million megawatt-hours (MW-hr) of Texas electricity.  (2)  Dividing the cost of the CREZ program, $7-billion, by the total wind generated electricity for the years 2013-2020, 459-million MW-hr, yields a subsidy of 1.5-cents per kw-hr.  (There are 1000-kw-hr in 1-MW-hr).  So, the total subsidy to wind can be broken down into direct, (the 2.3-cents per kw-hr in the PTC) and indirect, (the 1.5-cents per kw-hr from the CREZ program).

While these figures are easy to calculate, what do the mean?  The best perspective on these subsidies can be gleaned by comparing them to the fuel cost in a modern, efficient combined-cycle power plant.  A combined-cycle power plant uses a combination of a gas turbine engine and a steam turbine to produce electricity.  A gas-turbine is essentially a jet engine.  However, the gas turbines used in power generation are much larger than the jet engines that are slung under the wings of an airplane.  In addition, the hot exhaust from the gas turbine isn't simply exhausted to the atmosphere as it is in a jet engine.  Instead, the exhaust energy is captured and used to generate steam.  The steam is then used to power a turbine which is also used to make electricity.  The result of this 'combined-cyle' is a very efficient power plant that is able to convert a large fraction of the fuel's heat energy into electricity. 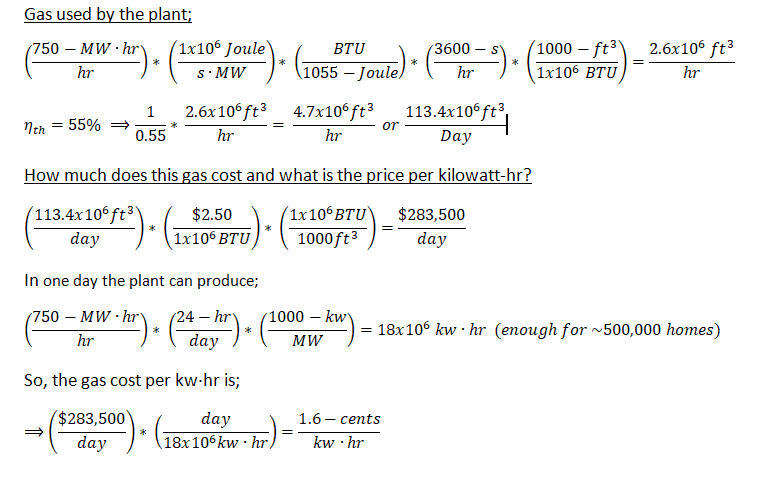 The total subsidies enjoyed by Texas wind, (3.8-cents per kw-hr), dwarf the natural gas cost of even an efficient combined-cycle power plant, (1.6-cents per kw-hr)!  Power in Texas is 'dispatched' or sold each day.  Power is essentially auctioned off each day and sold to the producer offering the lowest cost.  ERCOT, the Electric Reliability Council of Texas, manages this process.  Because of the advantage enjoyed by wind via their subsidies, wind power producers could produce electricity at costs that no thermal power plant could match.  Indeed, the PTC subsidy was so large that wind power producers could quote negative prices for electricity and still make money.  These economic aspects of the Texas power market would also impact the operational aspects of thermal power plants.

Figure 1 captures this data with a stacked area chart.  Plotted on the y-axis is the amount of electrical energy required each month.  Even though Texas has an enormous industrial demand for electricity, Texas still sees an enormous surge in demand during the summer months.  This surge, of course, is driven by air conditioning. 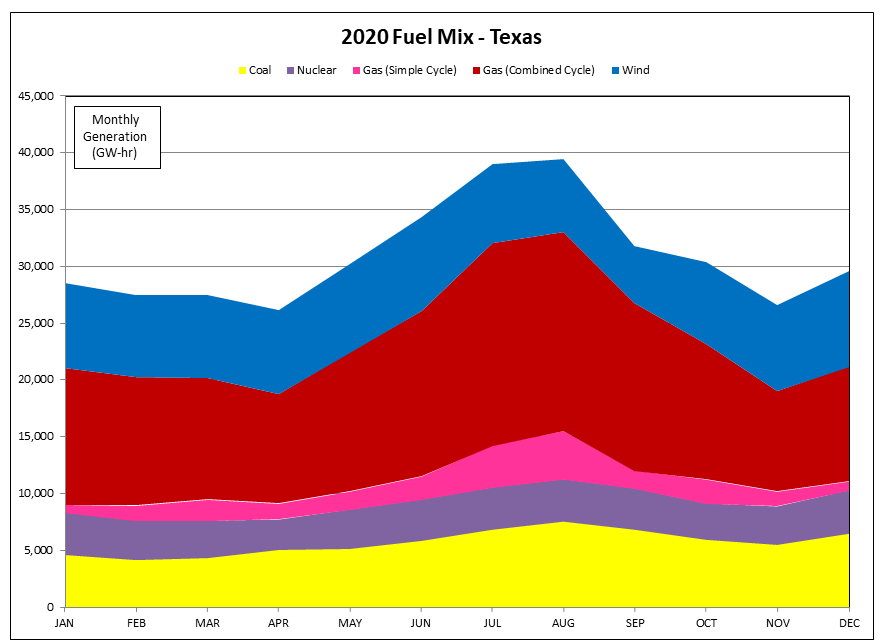 Nuclear power plants are designed to run at baseload and are unable to compensate for the increase in electricity demand.  However, note that all three thermal power sources ramp up in the summer to meet the increased demand for electricity.  (4)  In spite of the huge increased demand for electricity, the power produced by wind declines in the summer months.  As depicted graphically above, large numbers of thermal power plants  - which are needed to meet the peak demand for electricity in the summer - operate at reduced rates or simply do not operate for months at a time.  At reduced rates, thermal power plants aren't as efficient as they are at their design capacity, and their fuel costs increase on a per energy produced basis.  Of course, when the plants are not running, they aren't producing any revenue.  As if all this wasn't enough, as the wind energy subsidies greatly increased the volume of wind energy produced in Texas, the demands on the remaining thermal power sources to meet the peak summer demand became greater and greater.  In fact, by 2019 Texas had the lowest levels of electrical generating reserves in the country and these reserves were predicted to keep dropping.

CONCLUDING REMARKS:
The economic and operational aspects that wind energy subsidies imposed on Texas thermal power plants can be seen in microcosm with the bankruptcy filing of a modern combined-cycle power plant in Temple, Texas in 2017.  (5)  The plant went into operation in 2014 and utilized highly-efficient gas turbines.  However, the enormous volume of subsidized wind energy made it difficult for even highly-efficient natural gas plants to compete.  The Temple plant is hardly a unique example.  Also in 2017, Exelon placed several gas plants, totaling 3,500-MW of production, in bankruptcy.  (6)  While the gas turbines at issue here require cutting-edge technology that dwarfs anything ever done by the likes of Google or Microsoft, there was nothing complicated about the rash of bankruptcies among operators of Texas natural gas plants.  As one industry observer stated, "The reality here, is there is just too much subsidized wind in ERCOT." (7)

Like most crises - including the 2008 global financial crisis - the February 2021 Texas electricity crisis was a long-running affair.  The forces that ultimately produced the crisis developed over a long period of time.  As a result, it is a relatively straightforward affair for busy opportunists - and what better description of politicians is there - to obscure these long-running forces in the interest of producing a desired political outcome.  This was seen with the government's official investigation into the housing debacle - which didn't include interviewing former HUD Secretary Andrew Cuomo - and is likely to be repeated as part of any investigation charged with looking into the Texas electricity crisis.

4.  Simple-cycle gas plants are designed to quickly ramp up and provide short-term 'peak' power.  Where a combined-cycle plant utilizes a gas turbine engine and steam turbine working in concert, a simple-cycle plant only utilizes the gas turbine engine.  While these plants can quickly start-up - there is no steam system to warm up - they aren't nearly as efficient as combined cycle plants.