DISCUSSION:
Classical economics accepted as fact the notion of scarcity.  More specifically, in the material world there were limited inputs - traditionally described as land, labor and capital.  In contrast to these limited inputs, there was a virtually unlimited desire for economic goods and services.  How then to reconcile the unlimited desire for people to have economic goods with the limited economic inputs needed to create these goods?  It was the role of prices and profits to distribute economic inputs in such a way to maximize output. MMT holds that the notion of scarcity - which classical economics is based on - is wrong, at least when the central government can settle debts with money it creates out of thin air.  So, who is right - the classical economists or their modern MMT counterparts?

Fortunately, this is not a theoretical discussion.  Observations from the real world can be made and conclusions drawn from these observations.  The foundational tenet of MMT - namely the ability of the government to create as much money as it wants without concerning itself with deficits - is a common feature of countries engaged in a war or of countries dominated by an all-powerful central government.  Venezuela and North Korea provide good examples of the latter and a reasonably good template to observe the consequences of MMT in action.

Money has two functions - a store of value and a means of exchange.  When there are few consumer goods available for purchase, money has limited value as a means of exchange.  Undoubtedly, a government with an unbacked paper currency can create as much money as it wants provided it is willing to throw budgetary caution to the wind.  However, simply increasing the amount of money in circulation without increasing the amount of consumer goods available for purchase does nothing to increase the country's standard of living.  Indeed, after Hugo Chavez laid waste to Venezuela by creating enormous amounts of paper money, there was so much paper money lying around that desperate Venezuelan's created handbags and other items out of it in the hopes of eking out a living. See Figure 1.

FIGURE 1: Items made from Venezuelan currency 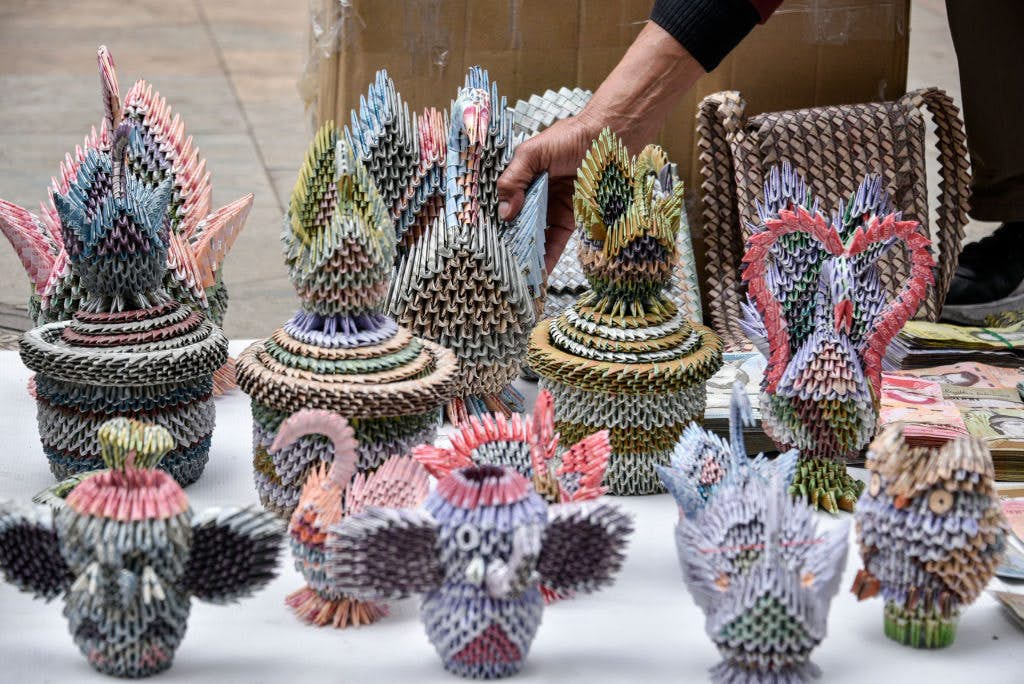 From a purely practical standpoint, it isn't a lack of money that limits consumption, its a lack of goods!   It is this glut of money and dearth of goods that contributes to the black markets which thrive whenever people have lots of paper money and few things available for purchase.  This completely unremarkable chain of events was described by the great Wilhlem Ropke as;
"The greater the amount of unsatisfied demand, the more numerous will be the subterfuges used to circumvent the maximum prices and the bolder will become the disregard for the law.  Black markets, under-the-counter deals, illegal currency transactions - a thousand years' experience has shown that these things accompany price controls as shadows do the light." (1)

North Korea provides us another example of the same economic forces that exist anytime money is available and consumer goods are not.  North Korean 'citizens' - and the term is being used very loosely - live in appallingly bad economic conditions.  However, the source of these conditions is a lack of goods, not a lack of money.  The North Korean government can create as much money as it wants, but it is incapable of converting even a torrent of government issued money into physical goods.  This despite the fact that the government has dictatorial control over the land and labor in North Korea.

As a result of this economic dynamic, "Choco Pies," cakes with marshmallow filling and chocolate icing have become an unofficial currency in North Korea! (2)  Choco Pies are used to obtain goods that simply are not available at any price in the official North Korean currency, the Won.  As funny as it sounds, Choco Pies have many attributes of a strong currency.  They are in high demand and have an intrinsic value that does not require a central authority to establish by fiat or legal tender laws.  They are easily transported, and can be divided into smaller parts to complete transactions of any size.  Because they will eventually be consumed, the supply of Choco Pies remains limited which keeps their value constant.  Indeed, the contemporary example provided by Choco Pies in North Korea is very similar to the historical example of cigarettes in post-war Germany.  As a result of becoming a rival to their own state-issued currency, the North Korean authorities are reducing the production of Choco Pies to ensure that people only have enough snack cakes for their own consumption and not enough to conduct transactions!  As the case of Choco Pies again shows, money only has value when it can be used to exchange for the goods you desire.

There is an enormous benefit to examining countries like Venezuela and North Korea when examining MMT and what it purports to demonstrate.  Western economies are, generally speaking - productive, and standards of living are high.  All sorts of economic idiocy and dead weight can be strapped to the back of these economies and many of the negative consequences will be masked by the production levels and living standards.  However, countries like Venezuela and North Korea don't have large levels of production or high living standards to mask the negative impacts of an all-powerful government creating as much money as it desires.  As the examples of Venezuela and North Korea demonstrate, living standards rise and fall with production, not with the amount of money that a government is willing to create!  In Venezuela so much money was in circulation the people made handbags out of it.  In North Korea people realized they'd have better lucking getting the goods they want by getting their hands on some snack cakes instead of North Korean currency!