SUMMARY:
Modern Monetary Theory (MMT) holds that the notion of scarcity - which classical economics is based on - is wrong, at least when the central government can settle debts with money it creates out of thin air.  Examples from history demonstrate it is MMT that is based on a fallacy; scarcities do exist and no amount of money creation on the part of an all-powerful government can eliminate them.  In fact, the most odious part of MMT isn't the economics.  Instead its the reliance on an all-powerful government; a government that is completely at odds with the constitutional chains put on it (in the United States at least).

DISCUSSION:
Classical economics accepted as fact the notion of scarcity.  More specifically, in the material world there were limited inputs - traditionally described as land, labor and capital.  In contrast to these limited inputs, there was a virtually unlimited desire for economic goods and services.  How then to reconcile the unlimited desire for people to have economic goods with the limited economic inputs needed to create these goods?  It was the role of prices and profits to distribute economic inputs in such a way to maximize output.  For example, as prices of a good went up, more resources would be dedicated to the production of that good.  As profits in an industry increased, other companies would look to make investments to start competing in that industry.  Prices and profits were the signals that distributed the limited inputs in such a way to maximize output.

The world of classical economics - where prices and profits provide the signals to maximize output in a world defined by scarcity - is summarized here by Wilhelm Ropke,
"Who is charged with seeing to it that the economic gears of society mesh properly?  Nobody.  No dictator rules the economy, deciding who shall perform the needed work and prescribing what goods and how much of each shall be produced and brought to market... Thus, the modern economic system, an extraordinarily complex mechanism, functions without conscious central control by any agency whatever.  It is a mechanism which owes its continued functioning to really a kind of anarchy." (1)

The world described by classical economists was not perfect and real physical want existed, regardless of how well prices and profits distributed economic inputs.  Most people would accept this lack of perfection as a consequence of human affairs, and point to the enormous gains the classical economic system had produced.  Regrettably, Modern Monetary Theorists are not most people.  Modern Monetary Theory (MMT) claims the notion of scarcity is wrong, at least when the government has the ability to settle its debts with money it prints.  Stephanie Kelton is an economics professor and was an economic advisor to Bernie Sanders' campaign for president.  She has become MMT personified.  Insight into her thinking can be gleaned from the the following quotes from a June 2020 interview with Fast Company magazine.  (2)
"There's been a lot of foregone prosperity in the name of trying to run a budget more like a household or a private business,, and that is costly to us as an economy and as a society."

"A (government) deficit works like a blower - it blows dollars onto the balance sheet, injecting dollars."
- Stephanie Kelton

History proves, conclusively, that the fundamental tenet of MMT - namely, the ability of government to eliminate shortages by creating money - is completely nonsensical.  This will be demonstrated by discussing the emergence of the world's first jet fighter and the use of oxen to tow it into takeoff position.  When the world's first operational jet fighter, the ME-262, entered combat, all other fighter aircraft  (essentially) became obsolete. (3) The ME-262's advantages went far beyond its jet engines.  Indeed, not long after the ME-262 entered combat the British employed their jet fighter, the Gloster Meteor.  The ME-262, unlike the Meteor, had swept back wings, optimized for high-speed flight.  It also employed leading edge slats that gave it improved maneuverability at high angles of attack.  It was armed with four Mk-108 30-mm revolver type cannons; part of the family of aircraft guns that provide the design basis for all single-barrel aircraft canon today.   Finally, in one of its last design iterations, it employed R4M folding fin rockets.  This gave the aircraft 'standoff' capability to attack and break up the large bomber formations which relied on fields of mutual defensive fire for much of their protection.

The ME-262 was developed, designed and manufactured under the direction of an all-powerful central government.  This central government issued its own paper currency and compelled, under the penalty of death, people to use this paper currency.  (Black markets were considered treasonous and subject to capital punishment)  All this economic, political and punitive power notwithstanding, the German government was incapable of conjuring fuel into existence.  For years, Germany had struggled to supply fuel to its armies.  See Table 1 for German and US fuel production for the years 1942 - 1944.  (4)  As a result of these shortages, the ME-262 was towed into takeoff position by oxen!  The same animals the Romans used to haul their military hardware around!  See Figure 1.

FIGURE 1: Government's Ability to Create Money Doesn't Translate into the Creation of Goods 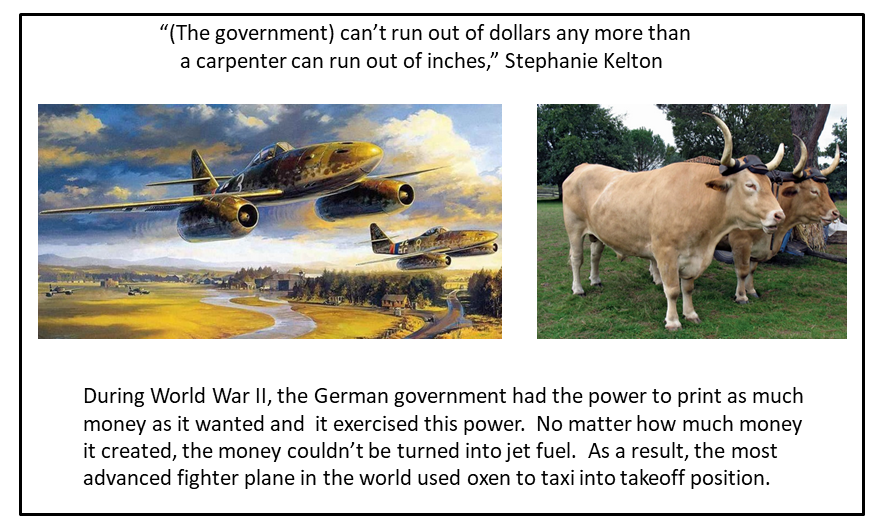 For those who think the example of the ME-262 and the inability of the German wartime governnment to provide it fuel proves nothing about the illegitimacy of MMT because it merely reflects the exigencies of war, history provides many other examples.  A historical example that closely parallels MMT is the French experience with the 'assignats.'  During the French revolution all church lands were seized and many churches ransacked.  (Notre Dame was first turned into a stable and then a "Temple of Reason.")  The murderous zealots leading the revolution believed that with church property now owned by the state, the state could create as much money as it wanted without the fear of inflation.  After all, the currency was now backed by the value of the confiscated church property.  The only thing the leaders of the French Revolution understood less than tolerance was economics.  They created a new currency, the assignat, to settle all government debts and issued this currency without limit.  It was an unmitigated disaster that led to a ruinous inflation, Napoleon and fifteen years of war throughout Europe.  It is no exaggeration to conclude that the creation of the assignat started the almost unbroken arc of decline that France continues to suffer from today.

More recently, there is also example of the Soviet Union.  Exactly like its counterpart in wartime Germany, the Soviet government dominated all aspects of its citizens lives.  Also like its counterparts in wartime Germany, regardless of the amount of currency it placed into production, the Soviet government could not conjure into existence the goods its people really wanted.  As the entire exercise in economic nihilism reached its terminal idiocy, goods of all types vanished from Soviet shelves. See Figure 2.

FIGURE 2: The USSR's Version of MMT 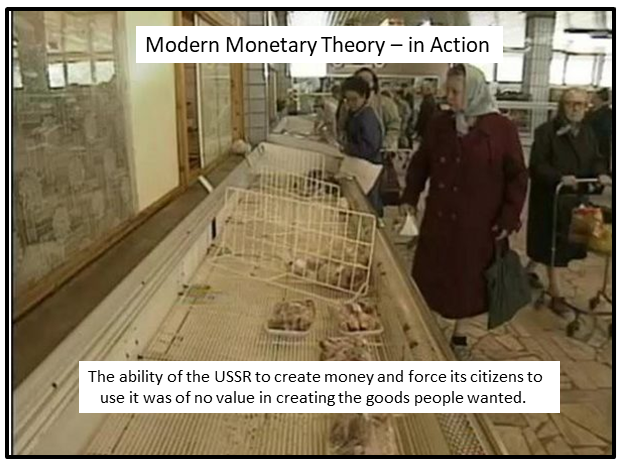 CONCLUDING REMARKS:
We live in a world of scarcity and limits.  No amount of money creation on the part of an all-powerful central government can eliminate these limits.  As the example of the ME-262 demonstrates, no matter how much money the German government created out of thin air and no matter how ruthlessly it exerted its power, it could not spontaneously create jet fuel out of the money it created.  This concept is crystallized by the use of oxen as part of combat operations for the ME-262 jet fighter.

Frederic Bastiat contrasted good economists from bad economists on the basis of their ability to see not just the immediate consequences of a policy but the long term implications as well; implications that must be foreseen.
"In the department of economy, an act, a habit, a institution, a law, gives birth not only to an affect but to a series of effects.  Of these effects, the first only is immediate; it manifests itself simultaneously with its cause - it is seen.  The others unfold in succession - they are not seen... Between a good and a bad economist this constitutes the whole difference; the one takes account of the visible effect; the other takes account of both of the effects which are seen and also of those which it is necessary to foresee."
- Frederic Bastiat (5)

Besides being based on an obvious historical fallacy - namely, that shortages can be eliminated by creating more money - MMT relies on bad economists who can't foresee the consequences of the policies they endorse.

3.  Of course, its performance advantages notwithstanding, the ME-262 could never redress the quantitative disadvantage it faced,  Moreover, experienced pilots were in short supply and the plane required hard surface runways, not grass field, to operate from.  As these sites became known, the ME-262 became very susceptible to attack as it attempted to take-off and land.  Finally, lack of certain strategic metals, nickel in particular, forced compromises on the engine's reliability.  With only one of its two jet engines operating, the ME-262 was no faster than its piston-engine driven contemporaries.