DISCUSSION:
Following the most recent presidential election their was much discussion among economists about what they perceive as the economic implications of the election results.  Economists - using their favorite mathematical abstraction, Gross Domestic Product (GDP) - were quick to note that the roughly 500-counties won by Joe Biden contribute 71% of US GDP, while the 2500-counties won by Donald Trump produce just 29% of GDP. (1)  These results are depicted graphically in Figure 1. 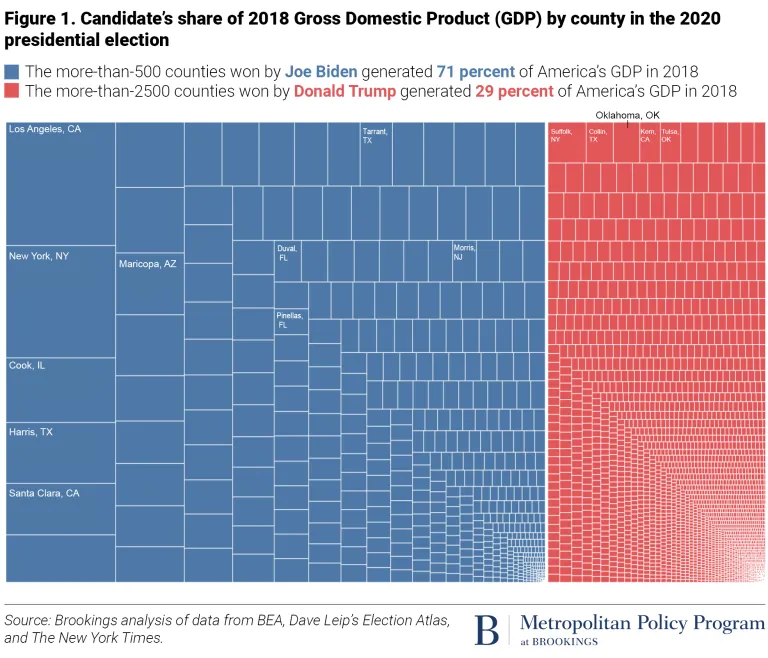 Of course, the implication of these results confirms the bias among economists and other elites.  Namely, that it is the heoric 'knowledge workers' in cities like Los Angeles, Chicago and New York that dutifully and self-sacrificially carry the slack-jawed yokels and deplorables of 'flyover country' on their broad economic shoulders.  However, does this conclusion make sense or is it, in fact, a sign of the enormous damage done to this country by economists and central banks?

(I) Real Wealth is Measured in Production
A review of Figure 1 reveals that the three largest counties as measured by GDP are Los Angeles, New York and Cook (Chicago).  While all sorts of office buildings are in LA, New York and Chicago, and many of the country's richest people live there, does that really mean 71% of US economic activity takes place in cities like these?  After all, real wealth is not measured in statistics like GDP; real wealth is measured in physical production.  The dollars that comprise GDP statistics only have value when there are things to buy. Here is the great Ludwig Erhard on the primacy of production in the wealth of a society,
"May I ask you all where the standard of living comes from if not from production?  Anyone who can suppose that it is possible to raise the standard of living without the necessary production must be living in a world of fantasy or cloud-cuckoo land.  We cannot consume more as a community than we have produced by our communal labor." (2)

The calculation of GDP makes no distinction between production that benefits society and other types of economic activity.  Indeed, GDP places equal value on government spending and a capital investment by a productive enterprise.  This is, of course, patently absurd. The failure of GDP to accurately capture the value added by different types of activity was discussed in another article of mine that contrasted the relative contributions to society by Whistling Dick, a mule-skinner who worked on the Los Angeles Aqueduct, and Henry Paulson, CEO of Goldman Sachs.  (3)  In spite of earning a tiny fraction of the hundreds of millions Paulson was paid at Goldman, Whistling Dick did far more to advance society's interest than Henry Paulson.  Economists would have us believe that GDP is a perfect proxy for value - economic and otherwise.  As the comparison between Whistling Dick and Henry Paulson show, GDP is not that.

More generally and over several decades, the US economy has been completely distorted by the Fed.  This is demonstrated in Figure 2.  (4)  Note how the portion of the economy dedicated to physical production and real wealth creation, manufacturing, has been supplanted by financial activities.  The financialization of the economy has been cheered on by economists at places like Harvard, MIT and the Brookings Institute, even as it crushed the Whistling Dick's of the world while rewarding the Henry Paulson's of the world.    Manufacturing as a portion of the economy is 50% smaller than it was in the 1960s.  Economists, and their fascination with GDP, would have us believe the country is better off and wealthier even as its productive capacity was halved!  Instead of confirming their sense of superiority over their countrymen, the results of Figure 1 should have awakened economists to the enormous damage they have caused! 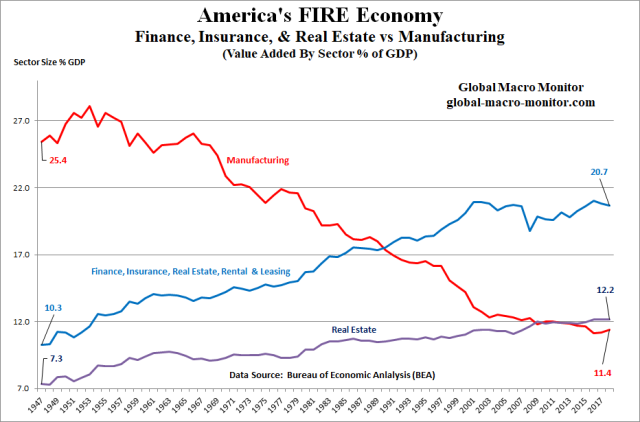 (II) AIG and GDP - Confusing Financial Engineering for Productive Enterprise
Figure 2 showed how financial activities, concentrated in cities, have replaced manufacturing activities.  This replacement of manufacturing with finance is a leading driver of the GDP disparity depicted in Figure 1.  (It is also a prodigious generator of wealth concentration.)  Finance, in the classical sense, played a huge role in the expansion of America's wealth generating capacity.  It was finance that allowed savings to be converted into productive investments in plant and capital equipment.  Finance was a means to an end, not an end in itself.  This aspect of finance hasn't changed much since the days of the Atlantic and Pacific Tea Company.

Because the classical role of finance hasn't changed, something else must explain the enormous increase in finance as a percentage of the economy.  This explanation can be found in the adage that finance is no longer a means to an end, but is now an end in itself.  The best example of this is the AIG debacle from the 2008 crisis.

AIG's undoing was its trade in mortgage derivatives.  In this trade, AIG issued 'insurance' against a mortgage bond losing value.  This was done via complicated derivative products.  The important point to observe is that these mortgage bonds existed before the derivative contract was issued.  In other words, AIG's trade in mortgage products - which went into the tens of billions of dollars - had nothing to do with with mortgages being issued or houses being built!  It was finance completely removed from the real economy!

Of course, AIG wasn't the only company in this trade.  In fact, AIG was at the center of an enormous financial universe that involved all of the largest Wall Street investment banks.  Indeed, the reason Henry Paulson and Tim Geithner gave for bailing out AIG was AIG was a trading partner with many other large firms.  Here is Henry Paulson on AIG, "It (the crisis at AIG) was unnerving.  Tim (Geithner) and I knew that an AIG bankruptcy would be devastating, leading to the failure of many other institutions." (5)  Table 1 shows how much money from the AIG bailout ended up in the hands of AIG's trading partners.  The AIG bailout wasn't a bailout of AIG; it was a bailout of Wall Street.

As a bailout of Wall Street and not just AIG, the AIG bailout allowed the rest of the country to peak behind Wall Street's curtain.  This glimpse - and the Fed went to great lengths to hide the exact nature of the AIG bailout - clearly showed how little much of what transpires on Wall Street has to do with increasing society's standard of living.  Is the fact that Wall Street finance is now such an enormous portion of US GDP, see Figure 1, something to be celebrated or a cause for concern?  Moreover, doesn't the fact that such a huge portion of GDP is completely removed from real wealth creation prompt some introspection into whether GDP is the economic end-all that economists have made it out to be?

Concluding Remarks:
The Bible observes, "A good tree does not bear rotten fruit, nor does a rotten tree produce good fruit.  For every tree is known by its own fruit.  For people do not pick figs from thornbushes nor do they gather grapes from brambles." (Luke, 6:43-44)

The parroting of the latest GDP and election data by places like the Brookings Institute demonstrates one of the foundational fallacies of modern economics - the confusion of money with wealth.  Because economists of the Brookings Institute and Federal Reserve type keep tripping over this same mistake, it is completely unsurprising that wealth has been concentrated in cities even as the real wealth creating activities in this country - think food, energy and goods production - take place elsewhere.

(2) Ludwig Erhard, The Economics of Success, D. Van Nostrand Company, Princeton, 1963, p. 97
Erhard had to fight the economic establishment to enact his post-war reforms in West Germany.  Erhard pursued policies centered on economic freedom and hard money.  These policies - their enormous success notwithstanding - have been rejected by modern economists who believe prosperity can be engineered by central bankers wielding formulas and measuring things like GDP.

(3) "Whistling Dick, Hank 'The Hammer' Paulson and Hillary Clinton - What Does GDP Tell us About Voters," September 16, 2018,
http://www.the92ers.com/blog/whistling-dick-hank-hammer-paulson-and-hillary-clinton-what-does-gdp-tell-us-about-voters