In the 1980s there was a very popular cartoon called "The Far Side."  The cartoon would only feature a single frame and the humor could be fairly dark.  One of the cartoons I remember was of a veterinarian student named Doreen studying equine medicine in chapter 9 of her textbook.  She has her book open and on the left-hand side of the page was a list of symptoms a horse could have.  They included things like a broken leg, infected eye, runny nose and fever to name just a few.  On the right-hand side of the page was a listed "treatment" for each one of these symptoms.  For each of the symptoms listed the treatment simply read "Shoot."  Under the cartoon slide the caption read, "Like most veterinarian students Doreen breezed through Chapter 9."

Ben Bernanke, Milton Friedman and Ivy League economics departments who ape the same ridiculous theory on the Great Depression don't look at the economy as being any more complex than Doreen's textbook judged equine medicine to be.  Bernanke publicly discussed his theory on the Great Depression on November 08, 2002 - Milton Friedman's 90th birthday. (1)  Of course, November 2002 was a rather odd time for Ben Bernanke to attempt to pass himself off as an expert on the Depression or anything else having to do with economics.  After all, Bernanke, as a voting member of the FOMC, was then embarking on a massive rate cutting program in the wake of the tech bubble collapsing.  These rate cuts - which, among other things, dropped mortgage rates to the floor - fed the climax run of the housing bubble.

As a result of their understanding of the Depression, it immediately follows that for the Bernanke's of the world, the problem of a stuttering economy can always be solved by simply increasing the money supply.  The discussion here will show that far from being an economic elixir, a central bank constantly expanding the money supply can produce incredibly damaging economic impacts over the long term.  This will be demonstrated by comparing the performance of several major currencies against the US dollar over the last 45-years.  In contrast to the Bernanke/Friedman theory on the Depression - which relies exclusively on very suspect economic data from just a few years in the 1930s - comparing the currencies at issue over such a long period of time will remove any temporal effects and ensure that only long-term economic sustainability is evaluated.

In the chart below, the performance of the British pound, the West German deutschemark (DM), the Euro, Japanese yen and Swiss franc (CHF) against the dollar are compared from 1971-2013.  Before 1971, currencies were held fixed against each other, and the value of the money the world over was established on the basis of the US dollar.  Finally, the dollar was held fixed against gold ($35 to one ounce of gold).  After August 15, 1971 and Nixon closing the gold window, currencies no longer had fixed values; instead they "floated" against each other.  Since 1971 - and outside of a brief outbreak of monetary sanity when Paul Volcker was Fed chair - the dollar has continued to decline against all these currencies with the exception of the pound. 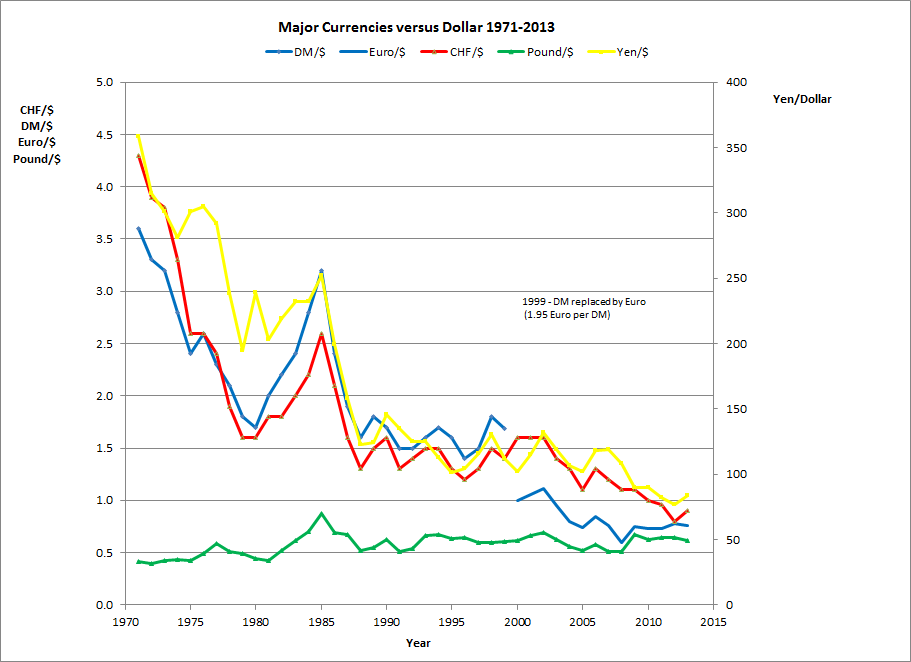 Without the natural braking action and discipline of gold, the dollar's fate has been placed solely in the hands of the PhD economists at the Fed.  As these PhDs fed data into their useless equations, the answer always came up the same - print more money.  As the money supply soared, the dollar fell and the results for the American people have been disastrous.

In complete contrast to Keynesian theory, the decline in the dollar's value did not increase the export competitiveness of the American economy.  In fact, over this time period the US - once the most productive nation the world had ever seen - ran massive trade deficits for years on end.  The erosion of the dollar's value discouraged savings, and the inadequate savings ate into the productive capital structure of the United States.  As this great stock of productive capital - long America's greatest economic asset and the reason the world's highest wages could be paid to American workers - was consumed, the competitiveness of American industry suffered.  Huge elements of America's productive capacity fell into disrepair from inadequate investment, and without this investment it became increasingly difficult for wages to remain high.  Today, the US is unable to competitively produce many of the items we used to flood the world with.  Apparently, this is Ben Bernanke's idea of the benefits a policy of credit expansion and cheap money can deliver to an economy.  Its wisdom is lost on the tens of millions of people who don't work on Wall Street.

It is important to realize when central bankers of Bernanke's ilk increase the money supply, they do so by increasing the reserves in the banking system; not by mailing checks to individual citizens.  Because an increase in the money supply of this type is affected through the banking system, central bank directed policies of credit expansion exclusively benefit financial services.  Banks get the money before any other industry and collect a "toll" - interest - when the money travels from their reserves and into the economy.  The more money that is created by the central bank, the more profit for the banks as this money makes its way into the economy.  The subsequent gains enjoyed by the Ivy League educated mediocrities working on Wall Street and in financial services are not the by-product of an increase in real wealth or productive capacity.  Instead, these gains come at the expense of the productive elements of society.  This simple dynamic explains the enormous increase in the relative size of financial services in the nation's economy that has occurred since 1971.

Not coincidentally, less than two years after the gold window was closed and the newly unfettered Fed was free to embark on an unprecedented campaign of creating credit out of thin air, economic disparity began its inexorable march higher.  In 1973, the share of national income earned by the richest 1% bottomed at 7.7%.  The richest 1% now earn 19% of the nation's income and the percentage continue to increase. (3)  Unsurprisingly, and according to a study from UC-Berkeley, the richest 1% of Americans now own 35% of the nation's wealth. (4)  The most damning indictment of the criminal stupidity latent in Ben Bernanke's and the economic establishment's theory on the Great Depression, and the salutary benefits of a constantly expanding money supply can be seen in this one chart.

(2) Bernanke even manages to get this simple point wrong.  'Deflation' was fingered as the cause of the Depression as far back as the 1930s.  However, there were enough decent economists around back then to realize that the fall in the money supply could only be an effect of the economy collapsing, not a cause.  See for example, Lionel Robbins, The Great Depression, Transaction Publishers, New Brunswick, NJ, 2009, p. 17