PREFACE
"The really catastrophic depressions are where the rot in the financial system goes very deep."
John Hicks, the first Englishman to win the Nobel Prize in Economics

'All the great economic crises are debt crises, not market crashes.  The 1929 crash was a result of the Fed underwriting bad debt via its low rate policy to benefit the UK.  The collapse following the 2008 debacle was much worse than the one following the 2000 stock crash because it involved debt, not stock.  Today will prove a debt crisis too.'
https://twitter.com/The92ers/status/1247123987110428673

DISCUSSION
One of the greatest action movies of the 1980s - which places it high in the running for greatest action movie ever - is 'Predator.'  One of the most iconic scenes - in a movie full of them - is when the team of commandos first sees the Predator.  Bill Duke ("Mac") - the team's machine gunner - empties his M60 machine gun and then pick ups the M-134 mini-gun from his fallen comrade, Jessie Ventura ("Blaine").  Mac is soon joined by Arnold Schwarzenegger ("Dutch") and Sonny Landham ("Billy"), both armed with M-16 rifles; Dutch's rifle includes a M203 grenade launcher while Billy's includes a shotgun hung underneath.  In what has to be the biggest ammo dump in cinema history, the team fires thousands of rounds into the jungle, all to no avail.  Before the smoke has even cleared, another member of the team, Richard Chavez ("Poncho"), quickly surveys the scene and reports back to Dutch his shocking observation, "Not a thing.  Not a '**ing trace.  No blood.  No bodies.  We hit nothing."

In a case of life imitating art, the Federal Reserve's policies following the collapse of the housing bubble are the financial equivalent of the Predator scene described above.  Instead of hurling thousands of bullets at an unseen jungle enemy, the Federal Reserve printed trillions of dollars and threw them at banks and Wall Street.  See Figure 1.  While the commandos wanted to kill the predator, the Fed was trying to help the economy recover from the housing debacle.  However, as will be discussed in two parts, the Fed had no more success getting the economy to grow with its money dump, than the commandos had in killing the predator with their ammo dump. 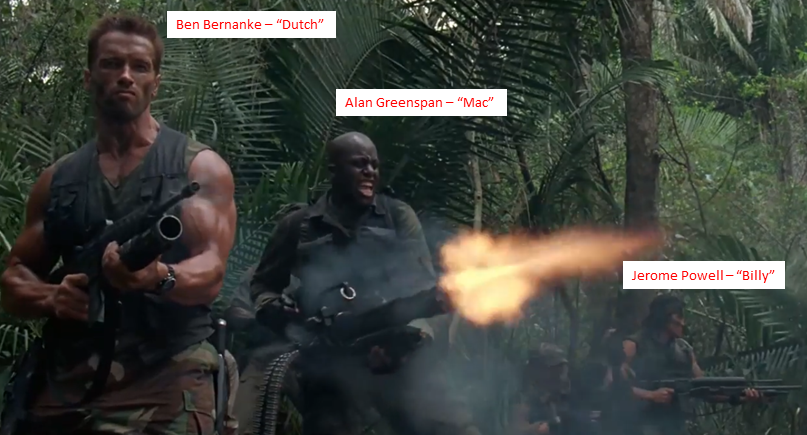 PART I - THE AMMO DUMP
As was described in last week's article, there was nothing very complicated about what the Fed did after the housing bubble burst. (1)  The Fed created trillions of dollars out of thin air and used this money to purchase distressed assets from banks.  (The Fed paid full price for these assets.)   What was unprecedented about this action was the sheer size of it.  The Fed's balance sheet when the crisis first broke was around $800-billion.  The balance sheet ultimately peaked at roughly $4.5-trillion in late 2014.

In response to the massive ammo dump of credit money into the banking system, debt in the economy soared.  This huge increase in indebtedness was apparently all part of the Fed's plan.  Some evidence of this was provided by Lawrence Summers, former Harvard president, Harvard PhD economist, President Obama's National Economic Council director and the ultimate economic insider. (2)  In October 2011, Summers, (amazingly), said, "debt got us into this mess and debt will get us out."  Some idea of how successful the Fed was in increasing total debt can be seen in Figure 2 below.

The graph plots four different types of debt - consumer, corporate, federal government and mortgage debt, (3-6).  The time range is the 20-year period from 2000 through 2019.  Consumer debt includes both revolving (credit card) and non-revolving (car loans, student loans).  The graph also highlights several key events associated with the huge explosion in debt, namely the various QE programs that were implemented.  As the chart makes clear, overall debt exploded in the wake of 2008.  While mortgage debt did decrease - hardly surprising given the enormous bubble that had blown up in housing - consumer, corporate and government debt soared soon after 2008.  Some idea of how much they soared is provided by Table 1.  Note also, that by the end of 2019 even mortgage debt had surged past its 2008 bubble peak.

As the table indicates, after 2008 total debt increased by $18-trillion!  (US GDP is now around $18-trillion per year)  As indicated by the preface to this article,' the really catastrophic depressions are those where the rot in the financial system goes very deep.'  Rot in the financial system - in the form of loans and mortgages that could never be paid back - going deep perfectly describes the cause of the great recession.  According to the Fed - and Lawrence Summers - the solution to a crisis brought on by the economy being saddled with huge amounts of unproductive debt was to incur even more debt in the economy!  Even if the huge increase in federal government debt is ignored, the growth in debt was huge and greatly exceeded the growth in the economy; consumer debt increased by 60% and corporate debt by 85%!  (Much of the increased corporate debt was then used to buy back stock, thus fueling an enormous bubble in stocks.  The stock bubble will be described in Part II.)

As simple logic dictates, the Fed's idea of solving a problem created by too much debt with even more debt was doomed to failure.  Indeed, the Fed's entire response to the collapse of the housing bubble illuminates how little PhD economists seem to understand how an economy actually works.  Writing about sixty-years ago, Henry C. Alexander of the Morgan Guaranty Trust Company, trenchantly and succinctly explained all that needs to be understood about borrowing and credit;
"Increased borrowing must be matched by increased ability to repay.  Otherwise, we aren't expanding the economy - we're merely puffing it up."
As will be described in Part II, the huge explosion in debt fueled by the Fed's 'Predator-esque' monetary ammo dump did puff the economy up.  However, it also fueled an enormous asset bubble that enriched many of the same people who brought the country to its economic knees in 2008.

ENDNOTES:
1.  The Federal Reserve - All Hat and No Cattle
http://www.the92ers.com/blog/federal-reserve-all-hat-and-no-cattle

2.  In addition to all his roles listed here, Summers also served as Assistant Treasury Secretary during the Clinton administration.  In this capacity, he ignored all the obvious lessons provided by the collapse of the hedge fund, LTCM, and played a major role in leaving derivatives unregulated.  Derivatives, this time masquerading as an insurance company - AIG, then played a huge role in the 2008 collapse.
http://www.the92ers.com/blog/lawrence-summers-and-1998-hearings-derivatives-wall-street-shill-masquerading-unbiased-public