Over the past three weeks, the Federal Reserve's metamorphosis from the traditional and passive 'lender of last resort to today's central planning leviathan has been described.  Recall that the founding basis for a central bank was to only serve as an emergency lender of last resort.  This basis was famously described by Walter Bagehot as, "in a crisis a central bank can lend freely but only against good collateral and only at high rates of interest."  For the purpose of this discussion, the Fed's metamorphosis from what it was to what it has become was separated into four eras; three of which have already been discussed.

This brings the discussion to what is likely to be the Fed's final act - at least as it would apply to anything remotely resembling the financial system of the post-Bretton Woods era.

ERA IV - QE and the Everything Bubble: Control is Lost
Alan Greenspan and Ben Bernanke oversaw the most crisis -riddled period in US economic history and the emergence of three enormous bubbles; all of which dwarf the 1920s stock bubble.  The three bubbles are the tech stock bubble (peaked in March 2000), housing bubble (homeownership peaked in April 2004) and the everything bubble (seemingly peaked in February 2020).  The US economy has never experienced three bubbles of this size in such a short period of time.  In fact, the last asset bubble of any consequence outside of the Greenspan/Bernanke era was the one Ben Strong blew up in the 1920s in ERA 1.

The most dire consequence of these bubbles isn't their number or even the relatively brief period in time over which they occurred.  Instead, the most dire consequence is each bubble was much larger than the one which preceded it.  It is this factor that is completely attributable to the Greenspan/Bernanke Fed and provides clear evidence the Fed has now completely lost control of events.  With the benefit of a few charts, it is this loss of control that will be discussed. 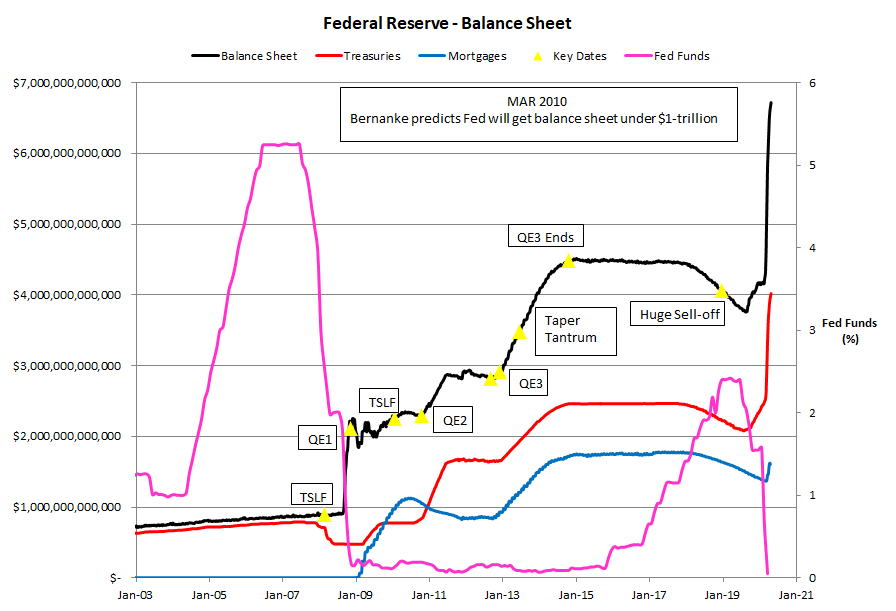 The Fed was completely unperturbed by the explosion in its balance sheet.  On multiple occasions leading Fed officials expressed complete confidence in returning the Fed's balance sheet to pre-crisis levels.  In March 2010 Congressman Ron Paul - one of a mere handful of legislators who understands the Fed - asked Ben Bernanke where he expected the Fed to have its balance sheet after the crisis was over.  Bernanke answered, "I think we would like to bring the balance sheet back to something consistent where it was before the crisis, which was enough to accommodate Americans' demand for currency plus a modest amount of reserves in the banking system.  That would suggest something under $1-trillion." (1)  In January 1, 2014, economists for the St. Louis Fed wrote, "The FOMC has stipulated that the expansion of the Fed balance sheet is temporary (emphasis in the original) and that holdings will return to normal as the recovery progresses." (2)

As shown in Chart 2, the Fed's only attempt at reducing its balance sheet ended in ignominious failure.  See in particular the period between the end of QE3 and the Nasdaq's bottom from January 2019.  It was no coincidence that the Nasdaq's huge sell-off - the December 2018 sell-off was the worst December since 1931, not exactly a good year for stocks - coincided with the Fed's only attempt at reducing the size of its balance sheet.  Clearly, the stock market couldn't stay anywhere remotely close to its elevated level if the Fed continued with 'normalizing' its balance sheet. 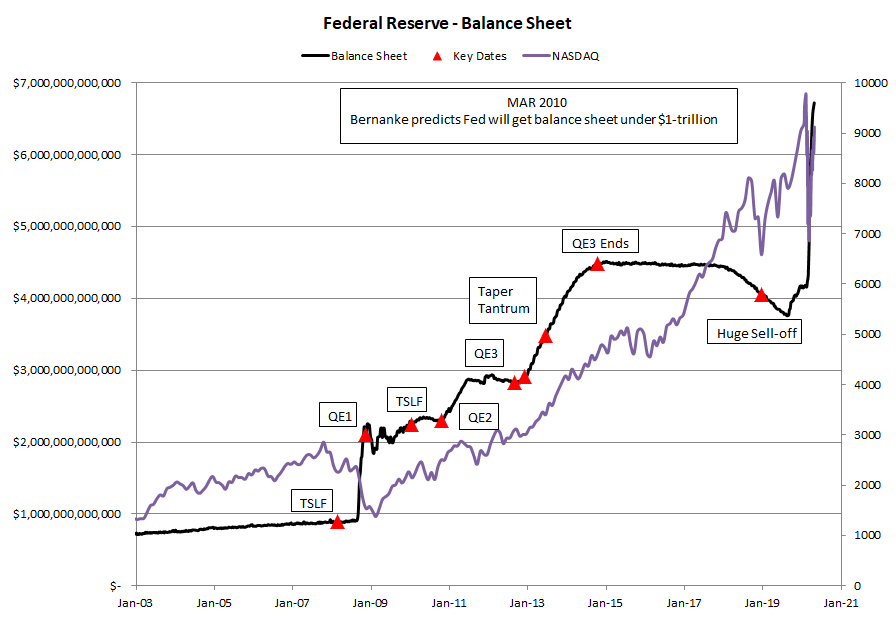 Recall that in his March 2010 testimony to Congress, Bernanke said he wanted to get the Fed's balance sheet to 'something under $1-trillion.'  The Fed couldn't get its balance sheet much under $4-trillion without threatening to bring the entire financial house of cards it had built up to come crashing down!  By March 2019, the Fed said it was unlikely that rates would be raised during the year and it would also stop reducing the size of its balance sheet by September.  All of this occurred long before anyone had ever heard of bat soup or the Corona virus.  The evidence was in; the Fed couldn't reduce the size of its balance sheet and was now a prisoner of all its past profligacy.  The Fed was a prisoner of its past.

CONCLUDING REMARK
The Corona virus has nothing to do with the Fed's inability to reduce the size of its balance sheet.  While the Fed's balance sheet has exploded even more in response to the Corona virus, any notion that the Fed would reduce the size of its balance sheet had vanished in December 2018.  The Corona virus merely accelerated the speed at which the Fed was traveling on the road to ruin; a road which the Fed itself had paved.  The huge increase in the Fed's balance sheet as a result of the housing bubble bursting - which the Fed had a huge role in creating in the first place - was never going to be temporary.  The debts - public and private - that have been accumulated as the balance sheet expanded can never be paid back with real production.  The only thing that can dispense these debts is a massive inflation or some sort of accounting artifice (e.g. a debt holiday).  Moving forward, all that remains to be seen is what will be the financial system that takes the place of the one Greenspan, Bernanke and their successors frittered away and squandered?