Figure 1 shows the nine people, arguably, most responsible for the invasion of Iraq and the nation building exercise in Afghanistan; an exercise which collapsed this week.  Among these nine people there are thirteen Ivy League degrees including six from Yale and five from Harvard.  While they might have spent a lot of time in New Haven and Cambridge, not one of them spent a single second on active duty in the US military.  It hardly a pejorative to call these 'men' - so eager to send others into harm's way while demonstrating a complete unwillingness to do so themselves - cowards.

FIGURE 1:  They don't teach humility and admitting mistakes at Harvard and Yale 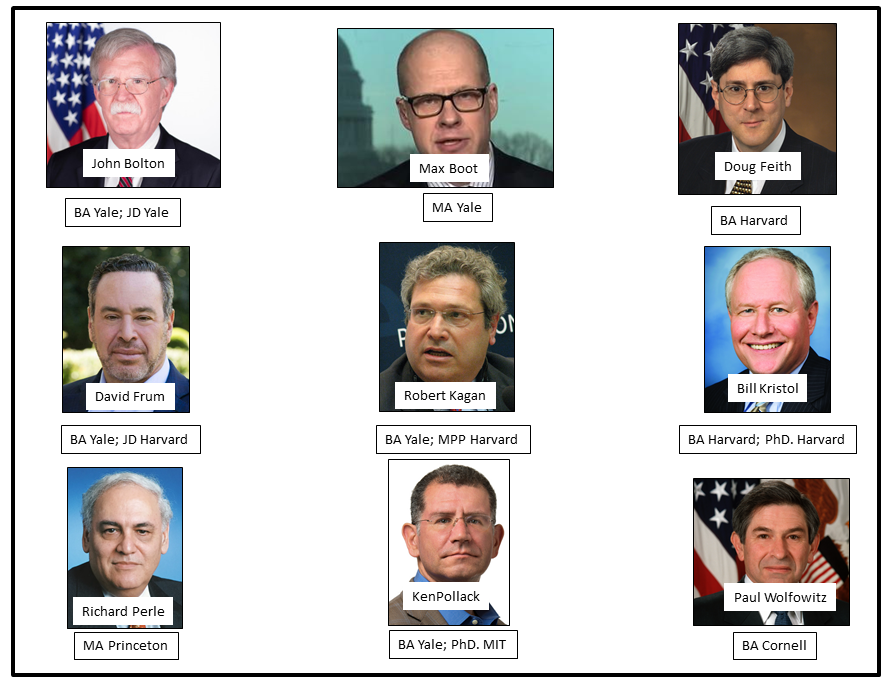 A brief synopsis of the history these Ivy League graduates are obviously ignorant of;

We will reconcile these facts - which are easily obtained and only require a cursory understanding of Middle East history and the baleful influence of the French and British empires - with some of the more outrageous conclusions reached by Kenneth Pollack.  Pollack served in the CIA as one of their 'experts' on Iraq - this in spite of the fact that he doesn't speak or read Arabic.  Pollack, then as a member of Council on Foreign Relations, would write the most well-known justification for invasion of Iraq, The Threatening Storm.  (3) Among the more laughable conclusions Pollack reaches are;

CONCLUDING REMARKS:
All the advocates of our recent Middle East wars regularly advanced the argument that fighting the war with Iraq now was preferable to fighting another war later.  Of 'preventative' war of this type, Otto von Bismark, the Prussian chancellor who united Germany, quipped, "preventive war is like committing suicide out of a fear of death" and described preventive war as "breaking eggs out of which very dangerous chickens might hatch."  The insights of one of history's most successful statesmen counted little against a lifetime spent on Ivy League campuses and Washington DC think tanks.  Moreover, if plans fall apart and these overseas adventures collapse into debacles, then blame can always be passed to someone else, with the military regularly being the easiest target.  After all, how could I be wrong?  I have two degrees from Yale!  Hey! Speaking of passing, would you be so kind to pass the hors d'oeuvres and the ammo?

ENDNOTES:
1.  The phrase "Pass the ammo and pass the hors d'oeuvres" comes from Christopher Buckley's novel, They Eat Puppies Don't They?

2.  The Russians were aware of this agreement and enjoyed some minor spoils as well.  However, the Imperial Russian government would not survive the war, and when Lenin became aware of the secret protocols of the treaty in November 1917, he had them published in Pravda (Truth) and Izvestia (News).