Paul Krugman has a BA from Yale and a PhD from MIT - both in economics.  From his perch at the New York Times, he has an almost unrivaled ability to dispense economic advice.  Because he constantly views economic events through a political prism, his advice on contemporary economic issues is completely devoid of merit.  Paul Krugman may be a lot of things, but an original thinker he is not.  In December 2000, he spoke for the economic establishment in academia, on Wall Street and at the Federal Reserve when he said;
"The point is that recessionary tendencies can usually be effectively treated with cheap over the counter medication: cut interest rates a couple of percentage points, provide plenty of liquidity, and call me in the morning." (1)

In the view of Paul Krugman and modern economists everywhere, the Fed has the amazing ability - merely by manipulating interest rates - to inerrantly guide the economy.  It only takes a cursory review of economic history to show how laughable this idea is.  The two biggest economic disasters to befall the United States - the Great Depression and the Great Recession of 2008 - both occurred after the Federal Reserve was formed.  If the economy could be controlled with the contemptuous ease with which a doctor treats a common cold, then how could these two economic calamities occur with the Fed manipulating interest rates in exactly the way Krugman describes?

Indeed, Paul Krugman's endorsement of an "active" central bank controlling the economy with the same level of precision a pilot exercises to land a 747  is completely contradicted by Paul Krugman!  Writing in October 2002, Krugman praised the Federal Reserve of Alan Greenspan and Ben Bernanke for cutting rates and increasing liquidity after the tech bubble burst.  Here is Krugman in his own words,
"Its true that Alan Greenspan and his colleagues made a much better start than their counterparts in Japan.  They knew that the Bank of Japan cut interest rates too slowly, and by the time it realized the seriousness of the country's problems it was too late: even a zero interest rate wasn't enough to spark a recovery.  So the Fed cut rates early and often; those 11 interest rate cuts fueled a boom in housing purchases and mortgage financing, both of which helped keep the economy from experiencing a much more severe recession." (2)

The interest rate cuts that Krugman celebrates here were not fueling a 'boom in both housing purchases and mortgage financing;' they were fueling the terminal stages of the housing bubble, largest financial bubble in US history.  In terms of homeownership, the US housing bubble peaked not long after Krugman put these error-riddled thoughts to paper; April 2004.  To be sure, the Federal Reserve wasn't the only organization responsible for blowing up the housing bubble.  Enormously important roles were played by Bill Clinton, his two housing secretaries - Henry Cisneros and Andrew Cuomo, Wall Street, the two completely inept political cronies placed in charge of Fannie Mae (3), and many members of congress to name some of the most prominent.

However, it was the Federal Reserve alone that conjured out of thin air the credit money which provided the rocket fuel to send home prices and homeownership rates into the stratosphere.  Without the Fed actively manipulating interest rates, there was a limit to how big the housing bubble could grow.  With the Federal Reserve slashing interest rates as a matter of policy, there was virtually no limit to how big the housing bubble could grow.  As it turned out, the only limit on the size of the housing bubble would be the number of otherwise insolvent borrowers who obtained mortgages.  Once all these insolvent borrowers had their loans, there was nothing to force home prices higher.  Once home prices simply stopped increasing (4), the economy was doomed. 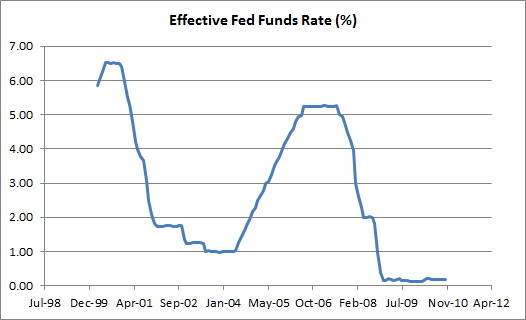 It should be obvious that the foundation of modern economics is built on the soft sand of an enormous fatal conceit; the ability of an all-powerful, all-knowing central bank to control the economy by manipulating interest rates.  One of the many ways in which the study of economics differs from useful fields like physics or mechanical engineering is the failure of economists to learn from their mistakes.  (Because so many economists, like Paul Krugman, graduate from schools like Yale and MIT, they don't even admit mistakes - which makes learning from them impossible.)

The inability of the Paul Krugman's of the world to learn from even their obvious mistakes should not discourage others from examining everything these economists get wrong.  In Part II of this discussion we will examine everything the Federal Reserve, in the form of a man named Ben Strong, got wrong in the 1920s.  As with the mistakes of the Greenspan/Beranke Fed in the early 2000s, the mistakes of the 1920s vintage Fed conclusively demonstrate the Fed can't control the economy by manipulating interest rates.  Indeed, the experience from the 1920s will show that the more the Fed attempts to actively control the economy, the more likely it is the economy suffers a spectacular collapse.

(3) Franklin Raines and Jamie Gorelick; Raines was budget director for President Clinton while Gorelick was deputy attorney general.  Neither of these two Harvard Law graduates had any experience with the mortgage industry. That didn't keep them from earning tens of millions of dollars while Fannie Mae would eventually disgorge tens of billions in losses.