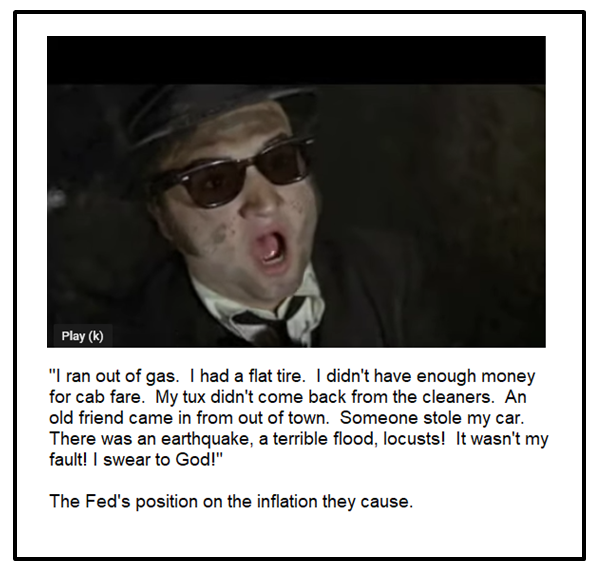 PREFACE:
In the original "Blues Brothers" movie, John Belushi's character - Jake Blues - comes up with a list of excuses why he left his bride at the altar.  He does this while she is holding him at gunpoint.  When it comes to inflation, the Federal Reserve adopts the identical attitude and disavows any culpability.  In Part I it was described how the Fed hides behind stable goods prices to avoid any responsibility for asset bubbles.  In Part II, the Fed's tendency to dismiss inflation as a result of 'shortages' or 'supply change disruptions' and not their actions will be discussed.

DISCUSSION:
Before discussing shortages and the Fed's role in creating them, a brief discussion of prices and how they are and how they are not determined is required.  As is typically the case, a powerful politician trying to rationalize the acquisition of even more power provides a perfect example of how prices are not determined.  In the late 1950s, California Governor Edmund 'Pat' Brown was trying to raise money for the California State Water Project.  Brown played fast and loose with the project's cost and the amount of water the project could deliver.  Brown substantially underestimated the cost of the project and greatly exaggerated the amount of water the project could deliver.  In a 1979 interview with the University of California's oral history program Brown explained why he low-balled the project costs;
"No, I don't think it (cost) has any validity because you need water.  Whatever it costs you have to pay it.  It's like oil today.  If you have to have oil, you've got to pay for it.  What's the value of oil?  What's the value of water?  If you're crossing the desert and you haven't got a bottle of water, and there's no water anyplace in sight, and someone comes along and says, 'I'll sell you two spoonfuls of water for ten dollars,' you'll pay for it."  (1)

Like most career politicians, Gov. Brown betrays a complete ignorance of how prices are determined in an economy.  (It's not an innocent mistake, because Brown's theory supports an enormous centralization of power.)  Prices are not determined based on the 'maximum utility' a good might produce under the most dire circumstances - water to a person dying of thirst.  Instead, goods are priced on their 'marginal utility.'  Wilhelm Ropke explains marginal utility and uses the example of water to do it;
"When it comes to assigning a good its place on the scale of values, the determining factor is utility - not a general utility based on the degree of the good's vital importance, but the specific, concrete utility of a definite quantity of a good....The value we attach to water is not determined by the infinite utility of the single glass of water needed to save us from perishing from thirst; it is determined by the utility of the last dose used to bathe ourselves or to sprinkle the flowers.  We call the utility of this last final dose final or marginal utility."  (2)

Ropke's description of marginal utility and the dominant role it plays in determining cost in an economy are prerequisites to understanding how shortages - and the dominant role central banks play in creating these shortages - can completely upset the price structure and cause huge increases in prices throughout an economy.  In a previous article, (3), the role prices and profits play in a free market was likened to a speed governor in an engine, See Figure 1.  As prices or profits rise for a particular good, additional quantities of that good tend to be produced.  Either companies already engaged in the production of that good increase their production, or entirely new companies enter the market.  As mentioned previously, the economic adage 'the cure for high prices is high prices' succinctly summarizes both the self-correcting role that prices and profits play in a free market and the fact that this self-correcting role requires no central control. 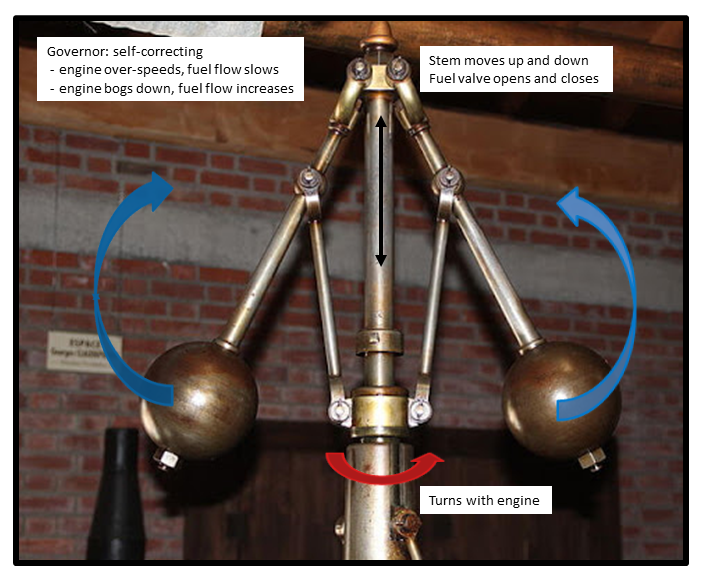 However, implicit in the self-correcting nature of prices and profits is an economy where large amounts of unsatisfied demand do not exist.  When shortages exist, the marginal utility of goods will sharply increase.  The goods that tend to be impacted the most are those goods that might be needed as inputs to a production process.  For example, huge amounts of electricity are needed to manufacture aluminum and cement.  As prices of electricity rise, producers of aluminum and cement will initially be willing to pay the higher cost.  After all, without electricity, they can't produce or sell anything.  However and over time, the marginal producers will have to cutback on production.  Because of their higher costs, they will be less able to absorb the higher cost of electricity in their cost structure.  As a result, an initial shortage of electricity will then manifest itself as shortages in aluminum and cement. Eventually, this mechanism will cascade through all types of industries and even an entire national economy can quickly bog down.

This mechanism of shortages cascading through an economy and wreaking havoc with prices is happening now.  Even the Fed acknowledges this, witness the following statement from Fed Chair Jerome Powell, "It's frustrating to see the supply chain problems not getting better; in fact they are probably getting worse.  It's very difficult to say how big the effects will be in the meantime and how long they will last."  (4)  While Powell is acknowledges these shortages, his statement makes it clear that he believes the Fed has no responsibility for them.  As Figure 2 indicates, the notion the Fed has no responsibility for these shortages is completely absurd. 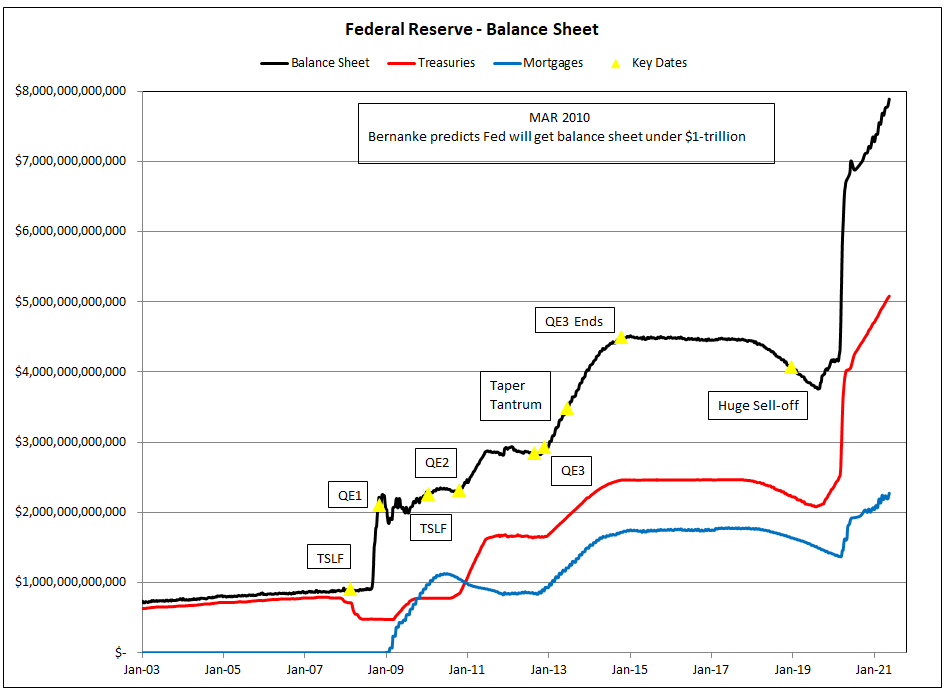 In the past two years, the Fed has doubled the size of its balance sheet, from $4-trillion to $8-trillion.  (Before the 2008 crisis, the Fed's balance sheet was 10% of its currently level, just $800-billion.)  Of course, the expansion of the Fed's balance sheet did not occur in a vacuum.  Instead, it was a necessary prerequisite for the enormous expansion of government spending during the pandemic.  Whatever your opinion on the merits of this spending, the spending was the equivalent of throwing a wrench into a jet engine.  The balanced economy that could rely on prices and profits to return markets to equilibrium and distribute economic inputs was no more.  In its place was an economy subject to enormous input from decisions completely removed from prices and profits.

The term 'regime uncertainty' was coined to describe the chaos created by the government's arbitrary and capricious policies during the Depression.  Faced with the constantly shifting sands of government edicts, the only policy that made sense to business during the 1930s was to tread water as best they could.  Consequently, business lending practically ceased to exist and the economy remained seized more than ten years after stocks crashed in October 1929.  'Regime uncertainty' was the source of the 'deflation' that Ben Bernanke mistakenly believes caused the depression.  (5)  Today's shortages share many similarities with the economy wide disequilibrium witnessed in the 1930s.  In both cases, the disequilibrium was imposed on the economy; it was not a spontaneous creation of the economy itself.  There can be no doubt - the Fed's unprecedented actions of the past two years are playing an enormous role in today's shortages and price increases.  When you hear a Fed official or central bank apologies explain otherwise, think of John Belushi in the Blues Brothers, "There was an earthquake, a terrible flood, locusts!  It wasn't my fault!  I swear to God!"