DISCUSSION:
In his post-crisis memoir, The Courage to Act, Ben Bernanke discusses his thoughts on the Great Depression.  He writes:
"A more general lesson from the Depression is that policymakers confronted with extraordinary circumstances must be prepared to think outside the box, defying orthodoxy if necessary.  Franklin Roosevelt, who took office in 1993, exemplified this by experimenting boldly in the face of the intractable slump....These measures brought intense criticism from orthodox economists and conservative business leaders.  And they were indeed experiments.  But collectively they worked."  (1)
As will be discussed, by this statement alone, Ben Bernanke demonstrates that not only is he not an expert on the Great Depression, he doesn't know the first thing about it, (or business more generally)!

FIGURE 1: Great Depression Timeline with Stocks as a Proxy for the Broader Economy 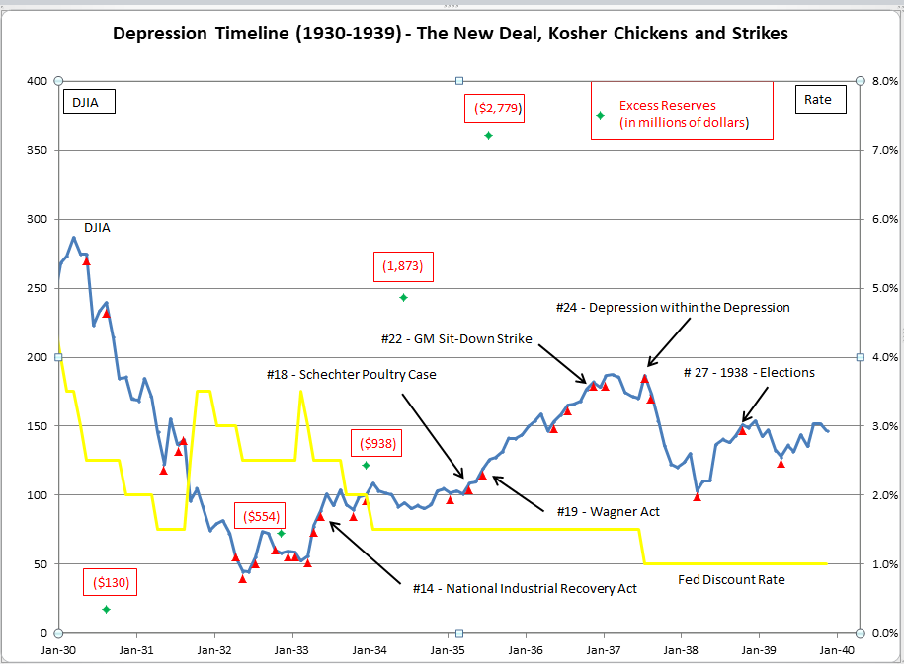 The NRA established a nationwide network of codes and standards.  These codes and standards where used to corral and direct industry.  Huge cartels were created in a wide range of industries, and the cartels were used to control wages, prices and production.  As is always the case, the largest companies were most eager to form cartels as cartels guarantee the largest companies remain the largest.  However, the smaller more nimble companies - which produce the most new jobs - were placed in a straight-jacket.   A good example of how all encompassing the NRA dictates and controls were can be seen by the NRA "Cleaners and Driers" code.  The code required a price of 40-cents to be charged to press a suit.  Jacob Maged of Jersey City, New Jersey had the temerity to charge 35-cents and when threatened with jail he said, "If you can send me to jail, go ahead."  Soon afterward, Maged was imprisoned and was fined $100 to boot! (2)

As Figure 1 shows, with the NRA passed the economy did not improve in any major way, see Items 14 and 18.  The chart uses the stock market as a proxy for economic activity. (It isn't perfect in this regard but the data is the easiest to obtain and among the least ambiguous data available.)  However, as the chart shows, soon after Item 18, the stock market began a rapid ascent, and this was mirrored by the economy.  So what was Item 18? Item 18 was the Schechter Poultry case, and it was tried before the Supreme Court.  In its decision, the court unanimously ruled the NRA unconstitutional!  In other words, once the NRA - the linchpin of the entire New Deal - was declared unconstitutional, (the NRA gave the federal government powers authorized nowhere in the constitution), the economy roared back to life!  Why would this be so?

When a company borrows money, it is - in essence - betting on the future. A company forecasts increased demand in the future, and needs to borrow money now to make the necessary investments to meet that future demand.  Obviously, when a company is unsure of the future or isn't confident in its predictions for the future, it won't borrow money.  Ben Bernanke - and virtually all economists in academia - blame falling prices for causing the Depression.  These people have the Depression completely backward!  Falling prices were not the cause of a floundering economy, they were an effect of the floundering economy!  Ben Bernanke - with his perfect SAT scores, his summa cum laude degree from Harvard and his MIT PhD - has confused an effect with a cause!

Ben Bernanke and all central bankers today excoriate the Depression era Fed for allowing prices to collapse.  However, what could the Fed do?  Again see Figure 1 and note excess reserves soaring to unprecedented heights.  Through a variety of programs the Fed had greatly increased the reserves in the banking system.  In fact, by 1935, excess reserves exceeded the total pre-Depression reserves of the banking system!  Should the Fed have created even more excess reserves?  The simple fact of the matter is the money supply in the US collapsed - and took prices with it - because businesses refused to take out loans.  There was nothing the Fed could do about the reluctance of private industry to take out loans.  This reluctance followed directly from the dizzying - and often contradictory - edicts issues by a myriad of government officials masquerading as tin gods, planning boards and code issuing committees.

The Relevance to Today:
The 'regime uncertainty' of the Depression era is seen today with the Biden administration's opposition to fossil fuels.  As a a candidate and as president, Joe Biden has been unequivocal in his conclusion that fossil fuels have no future, and are already living on borrowed time.  Indeed, in an executive order signed on December 08, 2021 President Biden called for 100% carbon free electricity by 2030 and "100% zero-emission light-duty vehicle acquisitions" by 2027; (in other words no new combustion engine sales after 2027).  (3)  Energy projects often have economic lives measured in decades, but President Biden is calling for all new vehicle sales to be electric by 2027.  In such an atmosphere oil and gas companies naturally pulled back on capital expenditures.  See Figure 2. (4)  Now that oil energy prices are soaring, it is disingenuous for President Biden to claim that his administration has done nothing to suppress energy production. 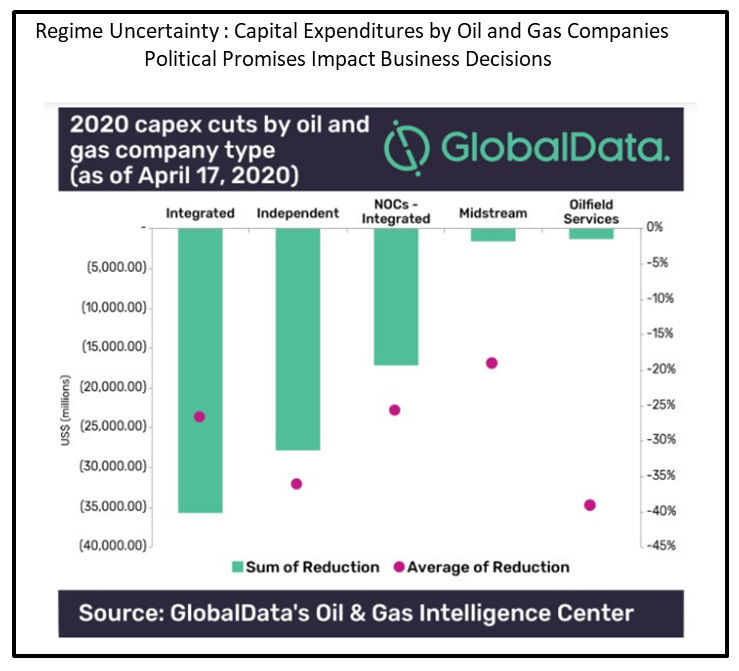