PREFACE:
Not only is it Super Bowl weekend, but this past Friday was the 32nd anniversary of one of the greatest upsets in sports history; Buster Douglas getting up off the canvas in the eighth round and knocking Mike Tyson out in the tenth round.  Before the fight, Tyson had a well-deserved aura of invincibility, and Douglas entered the fight as a 42:1 underdog.  At those odds, a $100 bet on Tyson to win would pay a little over $2.

This poor risk versus return ratio on a Mike Tyson victory was very similar to the risk versus return ratio faced by AIG in its credit default swap trade.  Mortgage bonds were considered as invulnerable as Mike Tyson, and the 'premiums' AIG received to insure them against losses were a tiny fraction of AIG's exposure to losses if the bonds ever did go bad.  As everyone now knows, AIG risked tens of billions in losses to earn a few hundred millions of dollars a year in premiums.  AIG based their entire mortgage derivative trade on the 'insights' of a Wharton finance professor, Gary Gorton.  (Dunce #27)  AIG's blunders in 2008 were virtually identical to those made by the MIT PhDs at Long Term Capital Management (LCTM) in 1998.

PhDs in finance and economics should come with a warning label, just like cigarettes.

ORIGINAL ARTICLE:
"Oh!  A nice uppercut by Buster Douglas!  Look at this!  He has knocked Mike Tyson down for the first time in his career.  Mike Tyson hits the canvas.  He's in big trouble!  He may not be able to recover.  Its up to seven and eight....he's not going to make it!  Unbelievable! Unbelievable! Unbelievable!  Buster Douglas is the new heavyweight champion of the world.  This has got to be - if not the - one of the biggest upsets in the history of boxing!
Bob Sheridan - the Voice of Boxing, February 11, 1990: The Tokyo Dome - Tokyo, Japan 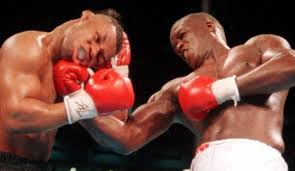