DISCUSSION:
Table 1 includes data from the Energy Information Administration (EIA).  It identifies Russian energy exports and where these exports are sent.  This discussion will focus on the export of natural gas to Europe, which is identified as 6.6 trillion cubic feet (TCF) in 2021.  This amount of gas is equal to 187-billion cubic meters (bcm) or 126-million metric tonnes (MT).  For anyone interested in the conversions, see Table 3 at the end of the article. 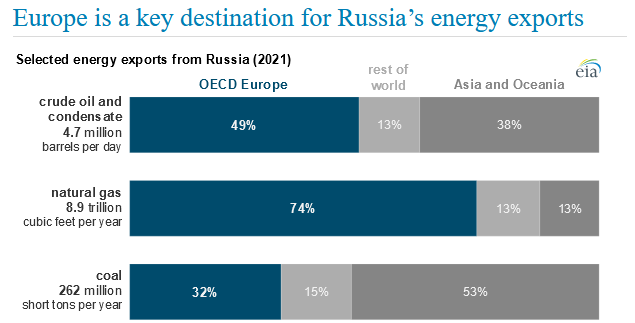 For anyone not versed in energy markets, the figures used to describe Russian gas exports are difficult to place in their proper context.  This isn't an academic issue because many people claim that Russian gas exports to  Europe can easily be replaced, or Europe would suffer little in the way of economic fallout if Russian gas exports were embargoed.  As an example of this, in March of this year, President Biden and EU President Ursula von der Leyen celebrated a deal where the 'US and international partners' would provide at least 15-bcm to the EU in 2022. (1) There's only one problem; in 2021 Russian gas exports to the EU were 187-bcm!  It is patently obvious that this 'deal' does very little to replace Russian gas in Europe.  Moreover, the 15-bcm of gas - which will be in the form of liquified natural gas (LNG) - will be more expensive than the Russian gas it replaces.

In parallel with the effort to replace Russian gas with alternate supplies has been the criticism of Europe for developing a dependency on Russian energy exports in the first place.  Perhaps the most obvious manifestation of this criticism was the controversy which sprang up around the Nord Stream II pipeline; a controversy which preceded the war in Ukraine.  Nord Stream II was the target of US based sanctions.  From a US perspective, if Nord Stream II could be blocked, that might open a new export market for US LNG.  However, these sanctions also had the support of many in Europe, especially among the leaders of Poland and Ukraine.

As Table 2 indicates Nord Stream I passes under the Baltic Sea, and Nord Stream II would have done the same.  Because the pipeline passes under the sea, much higher transmission pressures can be used.  (Because you don't have to worry about a gas leak causing a large explosion in a populated area.)  With these higher pipeline pressures, smaller pipes can be used to transport larger amounts of gas.  In addition, by passing under the sea, 'transit fees' - which pipeline operators currently pay to Ukraine and Poland - are avoided.  These fees are in the billions of dollars each year.  So Nord Stream II would appear to have less to do with increasing Russian gas exports to Europe and more to do with the routes used to export the gas to Europe.  Indeed, when Nord Stream II was being discussed, Poland didn't argue against the pipeline because it threatened to increase Russian gas exports to Europe.  Instead, Poland proposed an alternate route for the proposed pipeline, one that, passed through Poland!

(Note: the Bratstvo pipeline has several names, including the 'Trans-Siberian Pipeline)

CONCLUDING REMARKS:
Probably co-equal to the great Frenchman, Frederic Bastiat, as a defender of the free market was the Englishman Richard Cobden.  Of the trade between countries, Cobden said it acted "on the moral world as the principal of gravitation in the universe - drawing men together, thrusting aside the antagonism of race, and creed, and language, and uniting us in the eternal bounds of peace." (2)  While there is much that is laudable in Cobden's perspective on trade, he places the' trade cart' in front of the 'moral horse.'  A certain moral order must exist for trade to flourish; a flourishing trade doesn't create a moral order. (3)

Nevertheless, when trade exists between countries, there must be a mutually beneficial aspect to it.  Consequently, anything which would threaten that trade has a self-defeating aspect to it. The notion that Europe placed itself at a strategic disadvantage because of its Russian energy imports ignores the mutually beneficial aspects of trade.  The people that advance this argument never follow through and mention Russia's 'dependency' on Europe as a market for its gas.  For Russia, the gas at issue is only valuable when it is being exported to Europe, not when it is sitting underneath the ground in Siberia.  What makes Europe any more dependent on Russian gas than Russia is to exporting that gas to Europe?

TABLE 3: Conversion of Gas Exports in TCF to BCM and MT

3.  "Self-discipline, a sense of justice, honesty, fairness, chivalry, moderation, public spirit, respect for human dignity, firm ethical norms - all of these things which people must possess before they go to market with each other.  These are the indispensible supports which preserve both market and competition from degeneration.  Family, church, genuine communities and tradition form their sources... Markets and competition are far from generating their moral prerequisites autonomously.  This is the the error of (liberalism).  These prerequisites must be furnished from the outside, and it is, on the contrary, the market and competition which constantly strain them, draw upon them and consume them."  A Humane Economy, ISI Books, 1998, pp. 125-126.