INTRODUCTION:
Believe it or not, this is what the Fed thinks of itself;
"The Federal Reserve, the central bank of the United States, provides the nation with a safe, flexible and stable monetary and financial system."  (1)
A review of the Fed's own data will show that, far from providing safety, flexibility, and stability, the Fed is a progenitor of financial chaos and wealth concentration.

In the charts below, the Fed's balance sheet is plotted along with the portions comprised of government debt, (Treasury securities), and mortgages, (mortgage securities).  Also plotted are the Fed funds rate, (Figure 1) and the Nasdaq average, (Figure 2).  The Figures also reference a handful of the Fed's post-2008 programs, including the various rounds of quantitative easing, (QE), and the the Term Securities Lending Facility (TSLF).  In the TSLF - which was the Fed's first post-2008 emergency intervention program - the Fed traded Treasuries for debt securities.  Once QE was underway - where the Fed conjured trillions of dollars out of thin air and used this magical money to purchase toxic assets from the firms that helped cause the crisis - the TSLF program was redundant.

As part of reviewing this data, it is useful to keep the following assessments from several senior Fed officials in mind.  By doing so it will become clear that, far from proceeding along a well-ordered and completely understood path, the Fed's post-crisis interventions are haphazard stop-gaps, and the Fed has no understanding of how the economy will respond to any of its programs.  The assessments to be reviewed are not cherry-picked.  Rather they come from the officials - Ben Bernanke, James Bullard and Janet Yellen - who dominated the policy discussions and subsequent implementation. 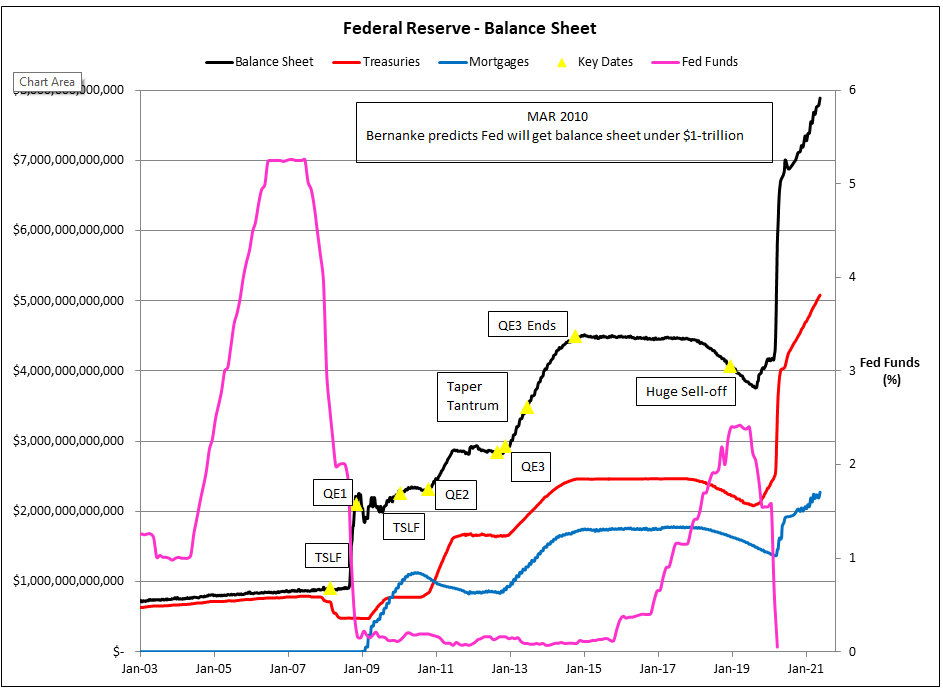 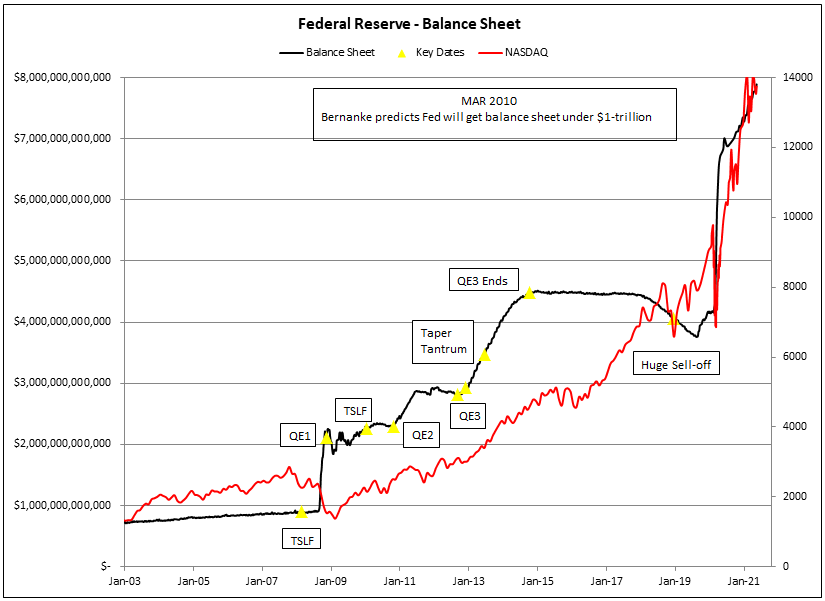 CLOSING REMARK:
For the past several weeks, numerous Fed officials have said the Fed has the 'tools' to deal with inflation.  Presumably these tools include cutting its balance sheet and raising rates.  Based on the data contained in Figures 1 and 2, any confidence in the Fed to cut its balance sheet or raised rates in unjustified..

5. Yellen said, "My hope and expectation is that when we decide to go forward with this plan, (reducing the balance sheet), there will be very little reaction to it, that's how we intend to proceed, and that this is something that will just run quietly in the background over a number of years, leading to a reduction in the size of our balance sheet and in the outstanding stock of reserves, and this is something that the Committee will not be reconsidering from time to time.  We think this is a workable plan, and it will as one of my colleagues, President Harker described it, it will be like watching paint dry." See page 17 of the link.  https://www.federalreserve.gov/mediacenter/files/FOMCpresconf20170614.pdf