DISCUSSION:
Last week, my home state - the great state of Texas - was in the news for all the wrong reasons.  Huge portions of the state - including where I live - went without electricity as a record breaking cold-snap blanketed the entire state.  As if the loss of power wasn't bad enough, many homes also went without water because of either burst pipes or inadequate water pressure in municipal water systems.  Of course after any debacle as large as this, there will be a flurry of recriminations.  Over the next few weeks, some of the facts and figures around the Texas electricity market will be reviewed.  As a preface to that, it is beneficial to review just how reliant any modern society is on the generation of prodigious amounts of electricity.  The figures in Table 1 are from the EIA.  (1) 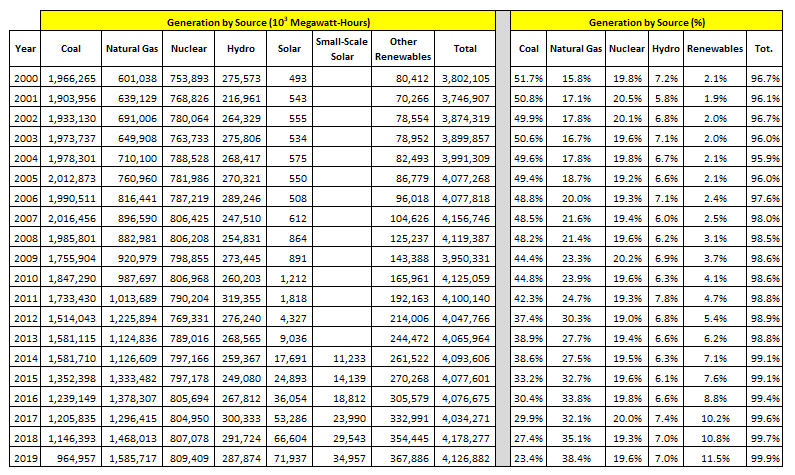 As unaware most people are of how much they depend on electricity for their direct needs like light and air conditioning, they are even more ignorant of the enormous amounts of electricity needed to make all sorts of goods including aluminum, steel, concrete and gasoline to name just a few.  To provide some perspective on the enormous demands placed on electricity generation and the total reliance society has on electricity being generated, a simple calculation is in order.

Dividing total electricity generation in the US by the number of people and the number of hours in a year reveals that the per person consumption of electricity in the US is 1.45 kw-hr per hour per person.   (See Figure 1) This is approximately 2-horsepower.  Another way to look at this consumption figure is to put it in terms of 'Lance Armstrong's.'  At the peak of his cycling powers, Lance Armstrong could generate about 450-watts of power for a few hours before collapsing in total exhaustion.  (A very healthy person might be able to do that for a minute.)  So, the average US citizen has the equivalent of 3.25 Lance Armstrong's ceaselessly working on their behalf, 24-hours per day, 365 days per year.

While the enormous dependence on electricity isn't a new development, how that electricity is generated is undergoing profound changes.  See Table 1 and note that since 2000, coal has dropped from 52% of electricity generation to just 23%.  In that same time, natural gas use has soared from under 16% of generation to over 38%, while renewables have gone from 2% to over 11%.

These national trends are also seen in Texas, see Table 2. (2)  Specifically, note that the use of coal has also been cut in half while the use of natural gas and renewable energy, (almost exclusively wind in Texas), have greatly increased.

As the use of renewable energy has increased, this energy has placed more and more stress on the grid.  This stress is captured by the 'duck curve,' see Figure 2.  The duck curve - which was first noticed in California - describes how non-renewable sources of energy are forced to go through large swings in production as the production of renewable energy ebbs and flows.  Figure 2 shows the daily cycle the grid is forced to go through in California, where solar is the dominant source of renewable energy.  During the day, solar production soars and conventional sources of power must greatly curtail production.  As people get home from work, solar energy generation falls off just as demand starts to increase.  A huge increase in conventional power generation is required to compensate for both the increase in demand and the decrease in solar generation.

While Texas produces a tremendous amount of renewable energy, very little of it is produced from solar.  (Solar didn't even merit a entry in Table 2).  The fact that Texas doesn't generate much solar energy doesn't keep Texas from experiencing a duck curve of its own.  However, the duck curve in Texas is seen over months, not a single day.  Table 3 contains ERCOT data for two days in 2020.  (2)  In the spring, when wind generation is high and electricity demand is relatively low, wind provides a huge fraction of Texas electricity; almost 40% on March 1.  However, in the heat of the summer the situation is completely different.  Electricity use soars by 69% while wind production plummets from the levels seen in the spring, down 57.4%!

The Electric Reliability Council of Texas, ERCOT, is responsible for ensuring an adequate and reliable supply of electricity in Texas.  As the events of last week demonstrate, the system wasn't adequate or reliable, at least when asked to operate in an environment of record low temperatures.  As more and more wind energy was added to the grid, the demands on the conventional sources of thermal power - coal and natural gas - became larger and larger even as the overall power provided by thermal power decreased!  (From 2007 - 2020 coal as a source of electricity was cut in half while natural gas basically tread water)  Stated another way, ERCOT asked thermal power sources to do more and more even as their ERCOT market share dropped lower and lower.  It reminds me of a scene from a movie......"Thank you sir.  May I have another?" 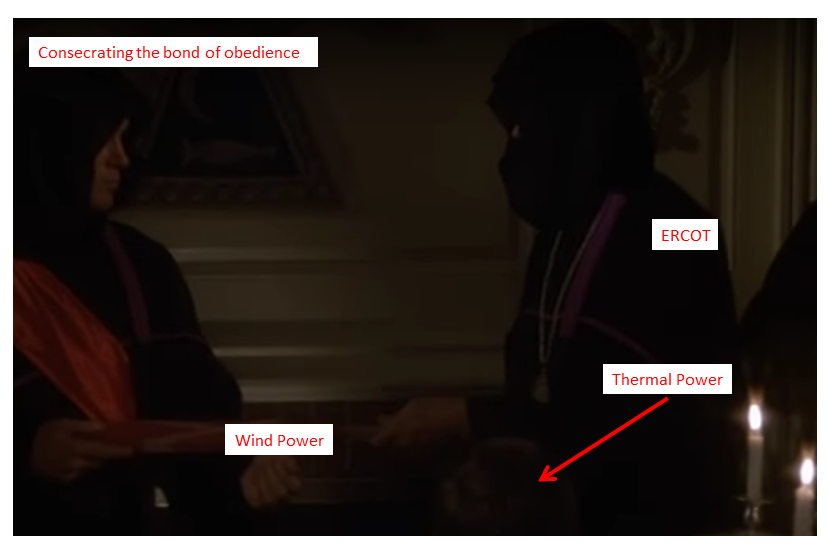 ENDNOTES:
1.  The EIA is the US Energy Information Agency.  They are a fantastic source of detail information on all types of energy and how it is produced.
https://www.eia.gov/electricity/annual/html/epa_03_01_a.html

2.  ERCOT - Electric Reliability Council of Texas.  ERCOT is the Independent System Operator (ISO) for Texas.  They are charged with ensuring an adequate and reliable source of electricity in Texas.  The data for the sources of electricity in Texas can be found in the 'Fuel Mix' reports on this page.  The report are in Excel and easy to work with.
http://www.ercot.com/gridinfo/generation