With markets heaving - futures are currently limit down at 5% - there will be widespread calls for the Fed to 'do something.'  Lost in this Pavlovian response for Fed succor is the realization that today's chaos is a direct result of the Fed interfering in markets in completely unprecedented ways.  Alan Greenspan's term at the Federal Reserve was a watershed in this country's history.  Prior to Greenspan's time at the Fed, the US had only been subject to one economy-altering asset bubble.  Of course this was the 1920s stock bubble, and the Fed in the form of Ben Strong played a leading role in the formation of this bubble. (1)

However, since 2000, the US has suffered from three economy (and society) altering asset bubbles.  The bubbles in tech stocks (2000) and housing (2008) have already collapsed while today's 'everything' bubble may now (finally) be deflating.  What could possibly explain this dichotomy?  How could the economy go six decades without an asset bubble to speak of and then suffer three huge bubbles in just twenty years?

Its the sort of question that answers itself.  The three huge bubbles of the past twenty years didn't occur when they did by coincidence or some sort of cosmic joke.  They occurred when they did as a direct result of the Federal Reserve's herculean effort to interfere with the price mechanism functioning as it should.  Starting with at least the Tequila Crisis of 1995 - where the Exchange Stabilization Fund was used to bailout investors in Mexican debt - the Fed constantly intervened in markets to prevent losses.  However, the forces that were producing these losses can't be suppressed forever.  The longer these forces are kept from acting, the larger the economic distortions (bubbles) become  Consequently, when these forces finally exert themselves, the damage is catastrophic.  It is no surprise that the housing bubble was bigger than the tech stock bubble.  It is equally unsurprising that today's 'everything' bubble dwarfs the previous two bubbles put together.

So, here is a timeline of the Fed's myriad interference in the market's price discovery mechanism.  As this timeline should make clear, the Fed's interference didn't solve any problem; instead, this interference just made existing problems bigger. 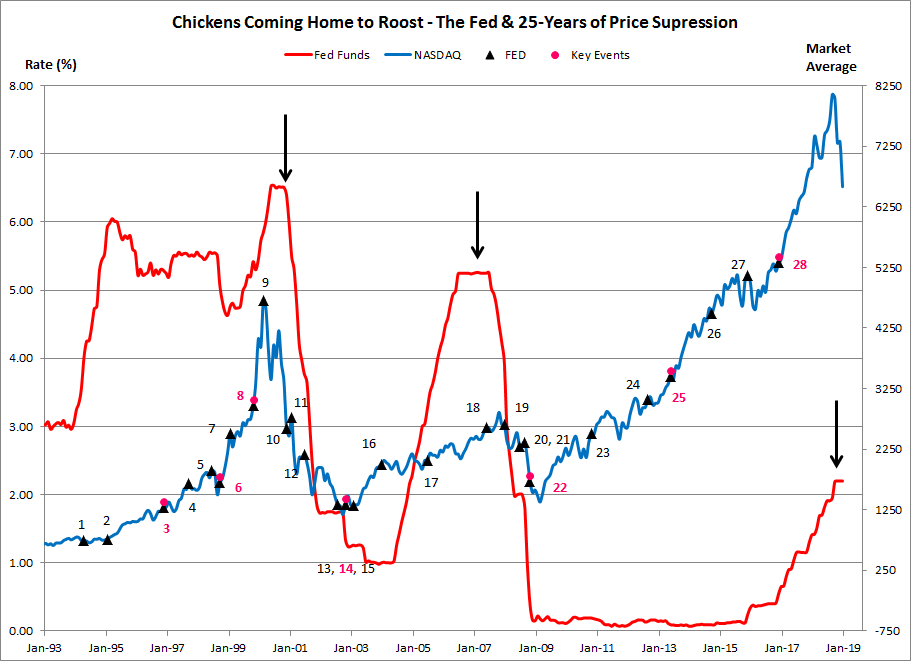 There is a Chinese proverb which states, "may you live in interesting times."  Because of the Federal Reserve and other central banks, we certainly do!

2. People who want to credit the Fed - particularly Bernanke and Yellen - for "saving" the economy through its programs of Quantitative Easing (QE) and zero interest rate policy (ZIRP) fail to acknowledge that completing these programs includes returning rates to "normal."  The simple fact of the matter is the US economy is still trapped in the experiments of the Fed's mad monetary scientists