PREFACE:
Recently, two Fed officials have commented on the inflation genie being let loose from the Fed's monetary policy bottle.  The officials are Randal Quarles and Ben Bernanke.  Their statements were as follows:
"Had clarity been provided, I think the Fed would have acted earlier." (1)
Randal Quarles, May 4, 2022
Quarles blames the uncertainty around Jerome Powell's renomination for inflation

In both cases, these Fed officials blame today's surging inflation on very short-term phenomenon and not long-running currents and forces.  While Quarles strikes a sympathetic tone, Bernanke is much less forgiving. The discussion here will show that today's inflation is systemic in nature and latent in the active role the Fed has assumed in the economy.  More specifically, it is pretty smug for Ben Bernanke - who played an enormous role in today's enormous economic imbalances - to blame today's inflation on one of his successors, Jerome Powell.

DISCUSSION:
Figure 1 plots interest rates and and the Nasdaq versus time.  Highlighted on the chart are some 'key events' that figure prominently in today's market chaos.  Before 2000, the Greenspan Fed played a key role in the tech stock bubble.  While the tech stock bubble might seem like ancient financial history, the collapse of the tech stock bubble prompted a series of Fed actions that led to the formation of the much larger housing bubble.  The most obvious manifestation of these 'actions' was taking rates to historic lows and keeping them there.  Even as home prices soared the Fed - with Greenspan as chair and Bernanke as vice-chair - claimed there was 'no inflation.'

Then, when the housing bubble collapsed, the Fed - now chaired by Ben Bernanke - embarked on an even more radical series of monetary and economic interventions.  Rates were reduced to zero and even that wasn't enough.  The Bernanke Fed then embarked on a series of QE programs, in which the Fed purchased government debt and mortgage securities with money it conjured out of thin air.  Bernanke promised these interventions were short-term.  As soon as the economy got back on its feet, the Fed would sell all these assets back to the market, and the Fed's balance sheet would return to its pre-crisis levels.  It never happened.

Instead, the Fed continued to focus on an absurd definition of inflation that ignored soaring asset prices.  As its QE programs marched on, Bernanke continued to focus on a narrow view of inflation which ignored asset prices.  Rather than concluding the crisis situation had long-since passed, Bernanke kept the Fed in full-blown crisis mode for years on end.  The most spectacular example of this was the Taper Tantrum of 2013, almost five-years after the collapse of Lehman Brothers.  After announcing that data indicated the need for QE had begun to pass, a 4% market sell-off was all it took for Bernanke to delay 'tapering' QE.  It was a criminally irresponsible decision.  Whatever chance the Fed had of unwinding its post-crisis interventions, they vanished in June 2013; and they vanished because of Ben Bernanke, not Jerome Powell.

FIGURE 1: The Fed's Mistakes are Systemic, not the Product of Short-Term Decisions 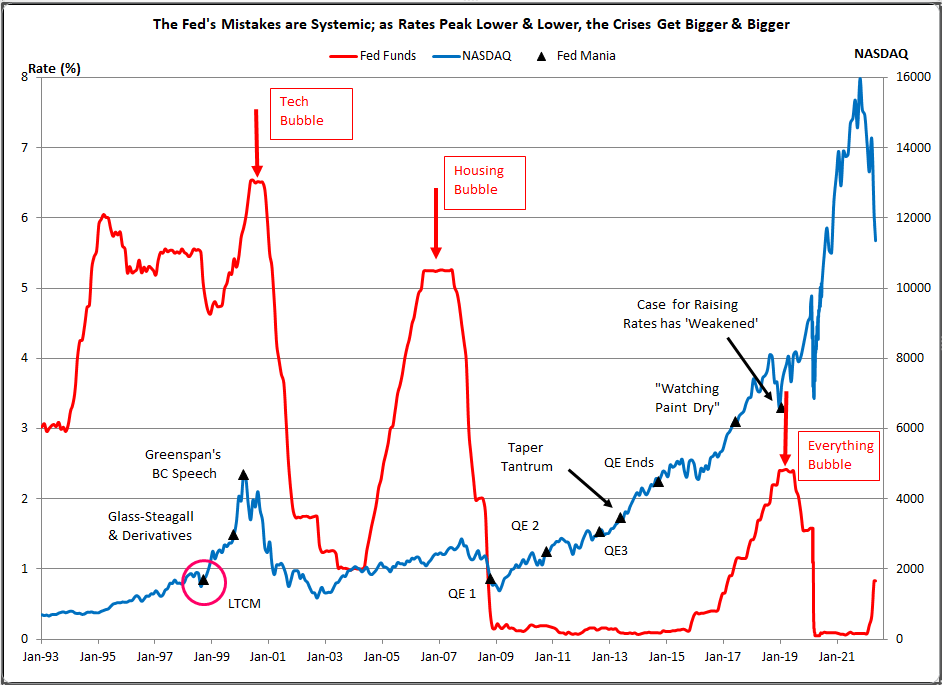 OCT 1998 - "One of the most irresponsible acts in Fed history"
After already cutting rates in September, Alan Greenspan engineers an 'emergency' rate cut between regularly scheduled FOMC meetings.  Greenspan does this because of the recent collapse of LTCM, a highly-leveraged hedge fund.  This prompts an enormous change in investor psychology, the "Greenspan put."  (3)

NOV 1999 - portions of Glass-Steagall repealed and derivatives left unregulated
Portions of the Glass-Steagall act which separated commercial and investment banking are removed.  During the same month, the President's Working Group on Financial Markets recommends that derivatives remain unregulated, the very recent experience with LTCM notwithstanding.  The report is prepared by Lawrence Summers on behalf of the Treasury Department and signed by Alan Greenspan (Fed) and Arthur Levitt of the SEC.  (4)

MAR 2000 - Greenspan extols "new era" economy days before NASDAQ peaks
"The fact that the capital spending boom is still going strong indicates that business continue to find a wide array of potential high-rate-of return productivity-enhancing investments.  And I see nothing to to suggest that these opportunities will peter out anytime soon."

SEP 2012 - Fed launches QE3
Fed to purchase $40-billion in bonds and mortgage backed securities indefinitely.  As part of QE3, the Fed also announced that interest rates would remain at 0% through 2015.  Finally, in December 2012 the monthly asset purchases were increased to $85-billion.

JUN 2013 - Fed threatens to "taper" QE, market throws a "taper tantrum"
In June 2013 Ben Bernanke discussed "tapering" the Fed's asset purchases.  Bernanke stated,
"If the incoming data are broadly consistent with this forecast, the Committee currently anticipates that it would be appropriate to moderate the monthly pace of purchases later this year.  And if the subsequent data remain broadly aligned with our current expectations for the economy, we would continue to reduce the pace of purchases in measured steps through the first half of next year, ending purchases around mid-year."  (5)

Exactly as with Greenspan's 'irrational exuberance' speech in December 1996, Wall Street wasn't buying what Ben Bernanke was selling.  Over the next few days of trading the stock market fell about 4%.  Bernanke, like Greenspan before him, folded.  He didn't follow through on his promise to begin tapering in 2013.  Tapering wouldn't being until 2014 and asset purchases wouldn't end until October 2014.  From June 2013 to October 2014, the NASDAQ went up over 30% and would never look back until it soared above 8000 in September 2018, a gain of 130% since the taper tantrum.

JAN 2019 - Case for raising rates has 'weakened somewhat"
After the Fed started to reduce its balance sheet the stock market cried uncle in December 2018,  Exactly as it had done after Greenspan's irrational exuberance speech (DEC 1996) and the 'taper tantrum" (June 2013) the Fed folded.  In a few months, not only would the Fed stop raising rates, it began to cut them and the Fed's balance sheet started it inexorable rise higher.  See Figure 2.

Before discussing the legitimacy of cutting rates, it is useful to understand what the Bernanke Fed hoped to achieve with QE.  One of the main objectives of QE was to boost stock prices.  The Bernanke Fed believed the increased consumer 'wealth' from higher stock prices would spur more spending, and produce a self-perpetuating cycle of growth.  In a November 2010 editorial in the Washington Post, Ben Bernanke explained what he was hoping to do with QE - at least as far as stock prices is concerned.  "...And higher stock prices will boost consumer wealth and help increase confidence, which can also spur spending.  Increased spending will lead to higher incomes and profits, that, in a virtuous circle, will further support economic expansion." (6)

If you ignore the moral bankruptcy of QE and the enormous impact QE has on wealth concentration, and accept the large role stock prices play in QE, then it was a foregone conclusion that Jerome Powell would  revisit the policy of raising rates and cutting the Fed's balance sheet.   On January 30, 2019 - fourteen months before the start of virus lockdowns - Fed chair Powell admitted, "The case for raising rates has weakened somewhat." (7) 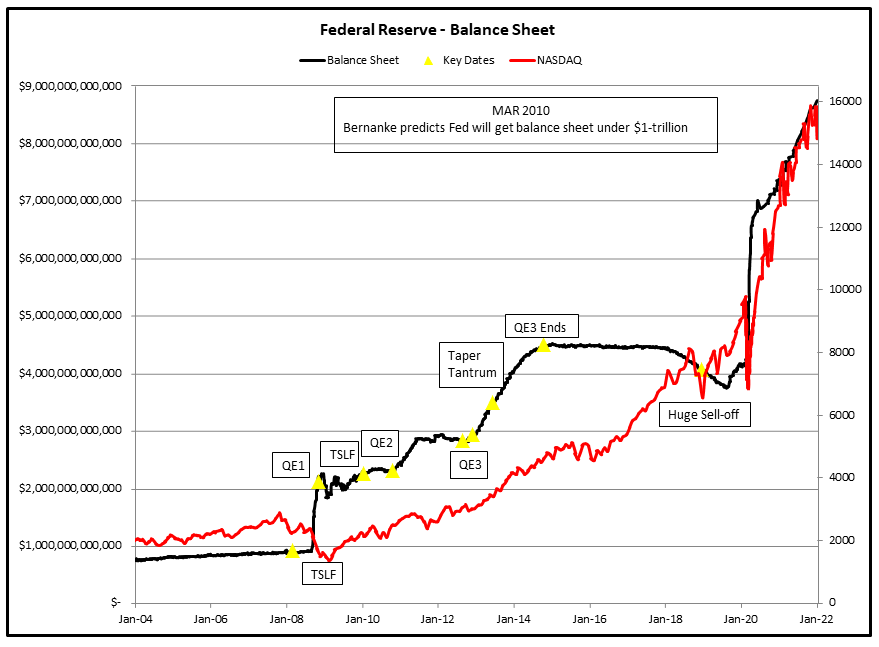 CONCLUDING REMARKS:
The mistakes of the Bernanke era at the Fed are identical to the mistakes of the Greenspan era at the Fed; neither Fed seemed to understand what inflation was.  In both cases, asset prices soared while the Fed claimed there was no inflation.  In fact, Bernanke didn't just claim there was no inflation, he claimed inflation wasn't high enough!  The Fed's myopic view of inflation blinded Bernanke and Greenspan to huge asset bubbles.  This was exactly the same mistake the Fed of the 1920s made under its non-titular head, Benjamin Strong.  (Bernanke is a great admirer of Strong which demonstrates Bernanke's understanding of the 1920s is completely wrong.)

Looking back on the 1920s - and with the Depression of the 1930s raging all around him - John Maynard Keynes summed up what the Fed of his day missed.
"Anyone who looked only at the index of prices would see no reason to suspect any material degree of inflation, whilst anyone who looked at the total volume of bank credit and the prices of common stocks would have been convinced of the presence of an inflation actual or impending.  For my part, I took the view at the time there was no inflation in the sense in which I use this term.  Looking back in the light of fuller statistical information than was then available, I believe that whilst there was probably no material inflation up to the end of 1927, a genuine profit inflation had developed some time between that date and the summer of 1929." (8)

Keynes' summary applies to both the Greenspan and Bernanke Fed.  It was the mistakes of the Greenspan and Bernanke Fed that continue to haunt the US economy and markets today.  It is beyond the pale for Ben Bernanke to divorce himself from today's chaos by blaming it all on the hapless Jerome Powell.  By becoming Fed chair when he did, Powell had a very bad hand to play and Ben Bernanke dealt it to him - from the bottom of the deck.

ENDNOTES:
(1) "A Former Fed Chair Just Warned that a Recession is Likely if the Fed Doesn't Act Quickly," Tristan Bove, Fortune, May 4, 1998
https://fortune.com/2022/05/04/fed-quarles-recession-is-likely-inflation-response/