DISCUSSION:
The irony of the term 'New Deal' being invoked to advance today's Green New Deal should not be overlooked.  Indeed, the fact backers of the Green New Deal, invoke the original New Deal in their efforts to increase its support, prove the only thing that can rival the engineering ignorance behind the Green New Deal is historical ignorance.

Despite its clear and obvious failures, it is not surprising that the New Deal should have so much support among government officials, central bankers, think tanks and college professors.  Why?  The New Deal placed enormous unaccountable power in the hands of a tiny cadre of people - the vast majority of whom didn't even hold elected positions.  Seen through the prism of a lust for power, the support the New Deal continues to enjoy - its massive and obvious failure notwithstanding - is easy to understand.  Don't have any illusions about what animates today's Green New Deal - it is this same lust for power.

Lust for power is one thing but facts are something else, and Figure 1 lays out an enormous amount of factual information.  Figure 1 plots the DJIA, interest rates and excess reserves for the years 1930-1940.  The DJIA is being used as a proxy for the economy.  Of course, it is not perfect in this regard, but, in an era when stocks were largely valued on the basis of dividends and current earnings, is among the best single measurements of economic activity.  Also plotted are interest rates and excess reserves.  Interest rates are of course a proxy for what the Federal Reserve was doing at the time.  The significance of excess reserves will be discussed later.  (Hint: they put to lie the notion that a passive Fed allowed the money supply to collapse!) 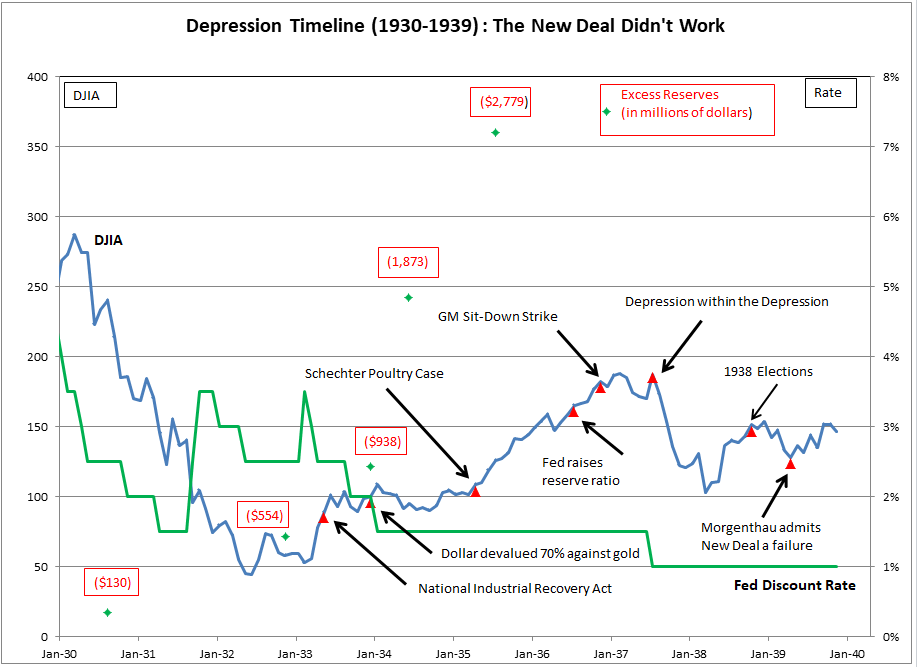 The Best Economic Performance of the Era was After the NRA Declared Unconstitutional!
The signature legislation of the New Deal era was the National Industrial Recovery Act (NRA).  The NRA established a nationwide network of codes and standards.  These codes and standards where used to essentially corral and direct industry.  Huge cartels were created in a wide range of industries, and the cartels were used to control wages, prices and production.  As is always the case, the largest companies were most eager to form cartels as cartels guarantee the largest companies remain the largest.  However, the smaller more nimble companies - which produce the most new jobs - were placed in a straight-jacket.

As Figure 1 shows, with the NRA passed the economy did not improve in any marked way.  However, as the chart shows, soon after the Schechter Poultry case, the stock market began a rapid ascent, and this was mirrored by the economy overall.  Schechter Poultry was tried before the Supreme Court and the court unanimously ruled the NRA unconstitutional!  In other words, once the NRA - the linchpin of the entire New Deal - was declared unconstitutional, (the NRA gave the federal government powers authorized nowhere in the constitution), the economy roared back to life!

The Fed Didn't Undermine the New Deal by Tightening Money
Defenders of the New Deal unanimously agree that the Fed undermined the New Deal by raising rates and thus sparking the 'Depression within the Depression.'  (more on this below)  These same defenders praise FDR for devaluing the dollar by 70% - the dollar fell from $20.67 per ounce of gold to $35.  However, as Figure 1 clearly shows, the economy, as indicated by the stock market, didn't react at all to the unprecedented devaluation of the dollar.  Just as clearly, Figure 1 shows no tightening of interest rates after 1933.

Figure 1 plots the Fed's interest rate on 'discounts and advances secured by eligible paper." (1)  Not only does this chart put to lie the myth the Fed raised rates and undermined the New Deal, the chart also shatters the fraud the Fed caused the Great Depression by being insufficiently active.  In particular, note that the chart also plots - marked in red - excess reserves.  These are reserves held by the banking system that are not then loaned to the investing public.  Historically, banks would try to lend all their reserves; after all, banks have to pay interest on their reserves but are paid interest on their loans.

The Depression Within the Depression
Now that that shibboleth about the Fed undermining the New Deal by raising rates has been addressed, attention can be turned to the most obvious manifestation of the New Deal's failure - the 'Depression with the Depression.'  Another signature piece of New Deal legislation was the Wagner Act.  It created, among other things, The National Labor Relations Board (NLRB). The NLRB would take labor disputes from the courts of law and place them in an inherently political environment where labor could be expected to - and did - dominate.  In a time, marked by massive unemployment - which, by definition, meant labor prices were too high - a politically emboldened organized labor movement would unhinge itself from the economic realities of the day and embark on the largest campaigns of strikes and labor unrest in the country's history.

The General Motors Sit-Down Strike is a particularly telling example of the labor strife that plagued the economy at this time.  Even though the economy was still in the midst of the Depression, GM was still in business, still manufacturing cars and still employing tens of thousands of workers.  At the time, GM did not have a unionized workforce.  The United Auto Workers (UAW) was of course eager to organize GM workers.  UAW leadership soon discovered the Achilles heel of the entire GM production organization, and would use this knowledge in their attempt to unionize GM. The UAW realized all GM production relied on the output of a tiny number of factories.  These factories built the dies used to stamp the body panels of all the different cars.  The largest of the these plants was the Fisher Body Division's plant in Flint, Michigan.  If the Flint plant shut down, then nearly all other GM plants would be forced to shutdown or curtail output as well.

In what came to be called the 'Depression within the Depression,' the economy suffered a spectacularly violent collapse between August 1937 and March 1938.  In August 1937, stock prices hit 190 but fell to 97 by March 1938, a decline of 49%.  The Index of Industrial Production - baseline of 100 for 1923-1925 - fell from 115 to 76 in the same period, a decline of 34%.  While the overall declines of these indices from the September 1929 peak were greater, the August 1937 crash remains the most violent contraction in the economic history of the United States. (3)

Requiem for the New Deal - the 1938 Election Results
The popularity the New Deal enjoys today would come as a great shock to the people who lived through the Depression.  With the dust from the 1937-1938  collapse of the economy still settling, people were running out of patience with the New Deal.  By the November 1938 elections, FDR had been in office for almost six years.  The majorities he enjoyed in Congress from 1933 - 1937 were some of the largest majorities on record.  Outside of the temporary defeat at the hands of the Supreme Court regarding the NRA, FDR was more or less able to do as he pleased with the economy.  Yet the economy seemed to be no better now than it was even a few years ago.  In the 1938 election people had an opportunity to pass judgment on the New Deal and they judged it a massive failure.  In fact, in 1938 New Deal parties lost nearly as many seats, 85, as the Republicans had in 1932, 100.

Raymond Moley was one of the original New Dealers and a founding member of FDR's 'brain trust.'  (Moley was a law professor at Columbia)  Moley had a public falling out with FDR and the New Deal.  In 1939 he wrote a book, After Seven Years, which catalogued the numerous failure of the New Deal.  Even one of the New Deal's most ardent backers and FDR's closest confidant, Henry Morgenthau, privately admitted the New Deal was a failure.  In May 1939 Morgenthau wrote in his diary,
"We have tried spending money.  We are spending more than we have spent before and it does not work.  And I have just one interest, and it I am wrong....somebody else can have my job.  I want to see this country prosperous.  I want to see people get a job.  I want to see people get enough to eat.  We have never made good on our promises...I say after eight years of this administration we have just as much unemployment as when we started...And an enormous debt to boot."  (4)