The fact that over the last 25-years or so the United States simply lurches from one crisis to another is distressing, but it shouldn't be surprising.  In this article the example provided by Lawrence Summers is used to show that with financial crises there seems to be little in the way of accountability or learning from the mistakes of the past.  The AIG debacle of the housing bubble era was an echo of the collapse of the hedge fund Long Term Capital Management (LTCM) just ten years before.  The obvious lessons from LTCM - namely, that derivative products were a great source of instability - were simply ignored by the financial powers that be - Lawrence Summers chief among them.  In 2005 - even with the benefit of the experience gleaned from the LTCM debacle - Summers dismissed Raghuram Rajan as a Luddite when Rajan worried about the dangers posed by increasingly complex and economically disconnected trading strategies.  Rajan even highlighted the non-trivial risk they could cause a 'catastrophic meltdown' - Rajan's exact words.  Rajan's warnings - which fell on Summers' deaf ears - were proved prescient three years later with the 2008 crisis, the role of AIG in particular.

So with this kind of record, surely Summers suffered some sort of rebuke or loss of professional prestige?  Note quite; in November 2008, the same month AIG was bailed out, President-elect Obama selected Summers to direct his National Economic Council.  You can't make this up - no one would believe you.

Following below is a brief review of these episodes.

Derivatives and Long Term Capital Management (LTCM)
In July 1998, President Bill Clinton and his Treasury Secretary, Robert Rubin, dispatched Lawrence Summers to testify to Congress on derivatives.  The hearings were held in response to Brooksley Born's proposal from May 1998 to look into regulating derivatives.  In his testimony, Summers - while glossing over many well-documented problems with derivatives (1) - focused on the legal argument the CFTC didn't have the authority to regulate derivatives. (2)  In this testimony, Summers also promised to study the merits of regulating derivatives as part of the President's Working Group on Financial Markets, (the Working Group).

In his July 1998 testimony, Summers gave two reasons for being skeptical of regulating derivatives (1);

The failure of the hedge fund Long Term Capital Management (LTCM) - coming less than two months after his July 1998 testimony - would show these two reasons to be completely wrong.  The Working Group didn't release its report until November 1999.  The report recommended providing derivative markets 'legal certainty' and removing 'legal obstacles' to the development of new derivative clearing systems. (3)  The report did nothing to prevent another spectacular collapse like the one recently evidenced by LTCM.

Lawrence Summers Dismisses Raghuram Rajan as a Luddite (August 2005)
As part of the annual Federal Reserve conference in Jackson Hole, Wyoming, papers are presented and discussed by the participants.  During the 2005 Jackson Hole Conference, Raghuram Rajan, then the chief economist of the International Monetary Fund (IMF), presented a paper called, "Has Financial Development Made the World Riskier?"  In it, Rajan wrote,
"Taken together, these trends suggest that even though there are far more participants today able to absorb risk, the financial risks that are being created by the system are indeed greater.  And even though there should theoretically be a diversity of opinion and actions by participants, and a greater capacity to absorb risk, competition and compensation may induce more correlation in behavior than desirable.  While it is hard to be categorical about anything as complex as the modern financial system, it is possible these developments may create more financial-sector induced procyclicality than the past.  They may also create a greater (albeit still small) probability of a catastrophic meltdown." (4)

The language is pretty dense, but Rajan was saying - correctly as the example of AIG would soon prove - that compensation could distort the natural diffusion of risk in financial markets.  Inevitably, some market participants would soon throw caution to the wind and see only the higher profits they desired.  (Psychologists call this cognitive dissonance.)  It is useful in this regard to recall the example of AIG.  After AIG collapsed, an AIG executive recalled that models developed by a Wharton finance professor helped convince Joe Cassano, the head of AIG's Financial Products unit, that the mortgage dertivatives they were investested in were not risky, highly-leveraged, incredibly complex 'bets' on mortgages.  Instead, they "were only gold, that if anybody paid you to take on these risks, it was free money." (5)  AIG lost at least $60-billion chasing this 'free money.'

Despite being proven completely wrong once before on the mythical benefit of increasingly complex financial innovation, Summers dismissed Rajan as a Luddite.  Specifically, Summers said the paper had a "slightly Luddite premise" and was "largely misguided."  (6)  It is useful to put some context to Summers remark.  In terms of homeownership, the housing bubble peaked in April 2004.  Moreover, housing had soared to unimaginable heights on, among other things, record low interest rates.  Those interest rates were now rising - fast.  (See the chart below).  In addition, in a little over one year, September 2006, Grant's Interest Rate Observer published an article describing the exact features a mortgage bond should have to make it a candidate for shorting via credit default swaps.  The same article claimed 'trillions' of mortgage securities were overvalued.  (7)  Talk about whistling past the graveyard! 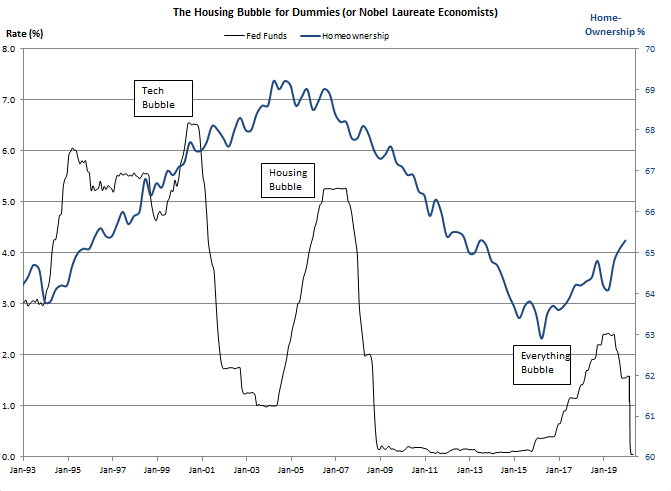 President Obama's Take on Lawrence Summers (In DC, Nothing Succeeds Quite Like Failure)
Shortly after being elected president, Barack Obama picked his economic 'dream team.'  Not only did this dream team include the feckless Tim Geithner, (8) it also included, as director of the National Economic Council, Lawrence Summers.  In announcing the selection of Geithner and Summers Obama said,
"I've sought leaders who could offer both sound judgement and fresh thinking, both a depth of experience and a wealth of bold, new ideas, and most of all who share my fundamental belief that we cannot have a thriving Wall Street without a thriving Main Street."

Of Summers specifically Obama said,
"As a thought leader, Larry has urged us to confront the problems of income inequality and the middle-class squeeze, consistently arguing that the key to a strong economy is a strong, vibrant, growing middle class.  This idea is at the core of my own economy philosophy and will be the foundation of my economic policies."  (9)

ENDNOTES:
1.  This article of mine provides some context around derivatives that was completely lacking from Summers testimony.  Summers ignored the fact that many veteran bankers were very skeptical of derivatives.

4.  Raghuram G. Rajan, "Has Financial Development Made the World Riskier?," (see page 6 of the PDF) https://www.kansascityfed.org/publicat/sympos/2005/pdf/rajan2005.pdf

6.  The term 'Luddite' refers to anyone skeptical of technical advances and is a term of derision.  The term goes back to the beginning of the Industrial Revolution in England.  There, followers of 'Ned Ludd,' smashed milling machines because they thought these milling machines would be the end of the textile industry in England.
"General Discussion: Has Financial Development Made the World Risker?"
https://www.kansascityfed.org/publicat/sympos/2005/pdf/gd5_2005.pdf