Over the past few weeks, I have discussed the Green New Deal (GND).  As a site largely dedicated to the 2008 financial crisis, it may not be immediately obvious why the GND has been featured on the site so much recently.  This blog post will more tightly tie together the animating force behind both the financial crisis and the GND.  However, before discussing the most significant common feature of the GND and the financial crisis, some additional scientific reasons to be skeptical of the GND will be discussed.

This week's article picks up where last week's, (1) left off and will start with a simple list.  Here are some additional reasons to be skeptical of the GND and the Green New Dealers behind it.

The Biggest Reason for Skepticism is Not Based in Science; It is Based in Human Nature:
As compelling as some of the reasons above are, the biggest reason to be skeptical of the GND and all the politicians pushing for its implementation is based on human nature.  It goes back to H.L. Mencken's observation on the nature of politics; "The whole aim of practical politics is to keep the populace alarmed, and hence clamorous to be led to safety,  by menacing it with an endless series of hobgoblins, all of them imaginary."   As Mencken indicates, the people who go into politics tend to be cut from a different cloth than other people.  Where a normal, psychologically healthy person would be loathe to immerse themselves in a topic they know little about, politicians only need one reason to do so; can they accumulate more power?

A hugely important factor behind the zeal with which so many politicians - and the United Nations in particular - have gotten behind climate science is the attendant conclusion that a problem this big can only be solved by powerful politicians and enormous central governments.  That this is so can be demonstrated by merely quoting some of the leading figures behind the climate change movement.

Note from the comments from Tim Wirth and Al Gore that the truth shouldn't get in the way as long as the political and environmental means are justified.  (The fact that these same political and environmental means result in people like Al Gore and Tim Wirth accumulating great power and wealth is only a mere coincidence!).  Note also the earth-shaking consequences of the Paris conference - 'a turning point for the world' and 'the world is holding its breath.'  Exactly as Mencken warned us about, all these comments betray the all-too-human driving forces behind the climate change movement.  These all too-human factors were also the same driving forces that caused the financial crisis.  What was it other than a great lust for power that made Bill Clinton think  he could determine - and produce - an ideal homeownership rate for the country, 67.5%?  What was it other than the same 'save the world mentality' that prompted the Fed to make one disastrous intervention into the economy after another until the entire house of cards collapsed?

Let me close with just one more thought.  The theory around global warming would have a lot more credibility if the people in the vanguard of the climate change movement started to follow the prescriptions they are more than willing to write for the rest of us.  For example, President Obama's first trip as a citizen after leaving the White House wasn't by bicycle.  He instead flew to Tahiti where he and many other stars in the Democratic party's firmament, including Bruce Springsteen, Tom Hanks and Oprah Winfrey, were entertained on David Geffen's 454-ft super-yacht, Rising Sun.  Small carbon footprints are apparently for the little people.  (The photo below shows President Obama on the Rising Sun; I believe he is taking the photo.) 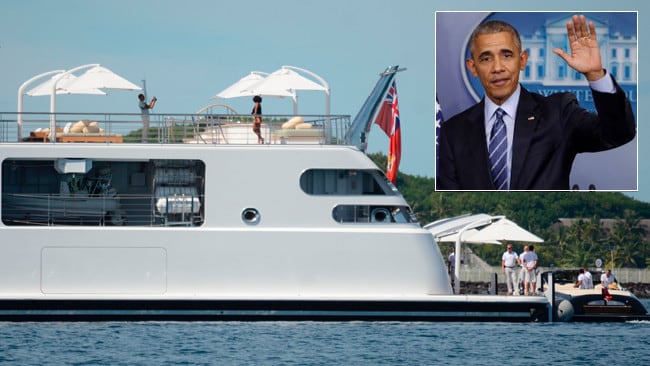 (2) https://science.sciencemag.org/content/194/4270/1121  The earth has an elliptical orbit around the sun, but it is only slightly elliptical.  The shape of this orbit goes through very subtle periodic changes.  The reason for these changes - at least as I understand them - is purely mechanical and gravitational.  The earth is not a perfect sphere, it is an 'oblate spheroid,' slightly wider at the equator than it is at the poles.  As a result the gravitational force that acts on the earth is not symmetric and these 'uneven' gravitational forces produce a moment around the earth's rotational axis.  This moment then causes the earth's rotational axis to change or 'precess."  These changes then have a very significant impact on the amount of energy that the earth is able to absorb from the sun.  Some idea of the impact that these changes is of course the ice ages themselves.  During the last ice age - which ended about 18,000 years ago - all of Canada was covered by thick sheet of ice.  This ice sheet extended as far south as the Ohio River.  It was changes in the earth's orbit around the sun that caused all this ice to melt, not changes in atmospheric CO2!

(5) The study showed that the 'hiatus' from global warming was the result of the PDO. https://scripps.ucsd.edu/news/inter-decadal-pacific-oscillation-explains-global-warming-hiatus-2000