Gordon Bethune, the former CEO of Continental Airlines, famously said of the airline industry, "you're only as smart as your dumbest competitor."  The point being, any airline - no matter how well run - can be completely undermined by a competitor dedicated to increasing market share at the cost of profitability.

The exact same dynamic was seen during the housing bubble with the mortgage market.  In this case, the dumbest competitor was the government sponsored enterprises (GSEs), Fannie Mae and Freddie Mac.  Fannie and Freddie weren't just any competitors, they were the driving force in the mortgage market.  Fannie Mae was created in 1938 as an 'emergency' response during the Great Depression.  Like all emergency interventions by government, Fannie Mae long outlasted the emergency that spawned it.  In 1968, Freddie Mac was conjured into existence to serve as an ersatz competitor to Fannie.  The fact that the GSEs had been around so long begs the question, if Fannie and Freddie have been around for decades, how could they have been a driving force of the housing bubble?  What changed?

The answer is quite simple and a direct consequence of President Clinton's 'strategy' to increase homeownership to 67.5%.  The only way to achieve Clinton's goal for homeownership was for the GSEs to abandon their lending standards and to greatly expand the pool of borrowers who could qualify for a GSE mortgage.  Prior to the Clinton administration fatal meddling with GSE lending standards, about 30% of GSE mortgages went to low and moderate income borrowers.  However, Clinton's two HUD secretaries - Henry Cisneros and Andrew Cuomo - increased these amounts to 42% and 50% respectively.  The most obvious manifestation of what an enormous mistake this was is, of course, the enormous losses the GSEs suffered on their mortgage portfolio when the housing bubble burst.  In September 2008, both GSEs were essentially bankrupt and placed into conservatorship.  They then  received hundreds of billions in capital injections to make up for their enormous losses.

This obvious chain of causality between President Clinton's strategy to increase homeownership, the radical change in GSE lending standards required by this strategy and the housing bubble is lost on PhD economist and Nobel Laureate, Paul Krugman.  Krugman estabilshes the housing bubble's 'point of maximum inflation' as the middle years of the 'naughties,' 2005.  At this time, the share of mortgage securitization by the GSEs was falling.  Because the GSE's market share was falling at the time the housing bubble was (supposedly) at its worst, Krugman argues the GSEs couldn't have had much to do with the housing bubble. (1)

In this week's discussion, a brief overview of the government's and the Fed's enormous roles in fueling the housing bubble will be described in timeline fashion.  With this established, next week's article will describe everything Paul Krugman gets wrong in dismissing the role the GSE's had in contributing to the enormity of the housing bubble. 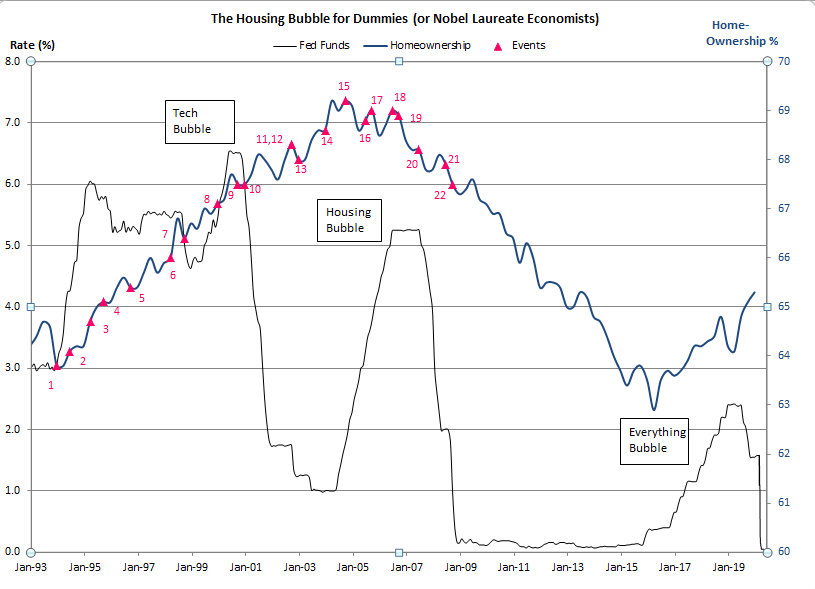 Concluding Remark:
As indicated here, it wasn't a coincidence that there was an enormous housing bubble shortly after the Clinton administration pursued a goal to increase homeownership to 67.5%.  In next week's article, Paul Krugman's complete ignorance of this obvious causality will be discussed.

8.  Jonathan McCarty and Richard W. Peach, "Is there a Bubble in the Housing Market Now,"  https://papers.ssrn.com/sol3/papers.cfm?abstract_id=923867