The personification of everything that is wrong with the contemporary understanding of economics and the manifestation of this ignorance in all the economic dislocations suffered by the American people – the enormous increase in wealth disparity in particular.  A basic feature of capitalism based on the division of labor – provided it is given time to operate and produce its benefits – is it should tend to produce a greater dispersion of wealth and an increased standard of living.  This was true even during the so-called “robber baron” days of the early 20th century.  The fact that precisely the opposite result is occurring today is stark evidence that something is fundamentally wrong with the US economy.  Without question, the fundamental flaw in today’s economy is its domination by the central bankers and central planners at the Federal Reserve – of which Ben Bernanke is Exhibit A.

The housing bubble – fueled as it was by the radical monetary policies of Bernanke and his central planning predecessor, Alan Greenspan – was merely a spectacular example of the same forces that have been building in the US economy since the early 1970’s.  After the crisis, the mainstream media universally hailed Bernanke for his heroic role in “saving” the economy.  This view betrays a complete ignorance of Bernanke’s enormous role in causing the crisis in the first place.  Not coincidently, Bernanke helped fuel this false belief by entitling his crisis memoir, The Courage to Act.  Don’t be confused, Ben Bernanke is not a heroic fireman who goes into a burning building to save an infant.  Ben Bernanke is an arsonist who burns down the tenement homes of poor people so rich slumlords can collect the insurance claims.  As far as any mistakes Bernanke made that could have caused the financial crisis, Ben Bernanke has never been wrong about anything – just ask him.

Bernanke’s role in creating the financial crisis was fundamental, and it is very difficult to distill his enormous contribution into a brief summary.  Instead of focusing on a series of actions on his part, the discussion here will show Ben Bernanke has a poor understanding of both inflation and the Great Depression – two things he is rumored to be an expert on.  This ignorance of inflation and the Great Depression is of more than academic interest; it was this ignorance that animated Bernanke’s – and the Fed’s - enormous contribution to the 2008 financial crisis.

The Federal Reserve during much of the 1920s acted in a criminally irresponsible manner.  The historical record makes it clear that the Fed acted the way it did – by slashing rates and pursuing an easy money policy – to advance the economic interests of Great Britain and its central bank chief, Montagu Norman.  In spite of the Fed’s reckless policies, the price of consumer goods changed very little during the 1920s.  Because of this, Bernanke – and Friedman – conclude there was no inflation in the 1920s.  Unfortunately for their analysis there were a variety of secular trends – primarily the Industrial Revolution – that produced enormous increases in productivity and these helped to keep consumer good prices down in the 1920s.  Where the Fed’s unwarranted increase in the money supply, the definition of inflation, in the 1920s manifested itself was in the price of assets – stocks and real estate in particular. 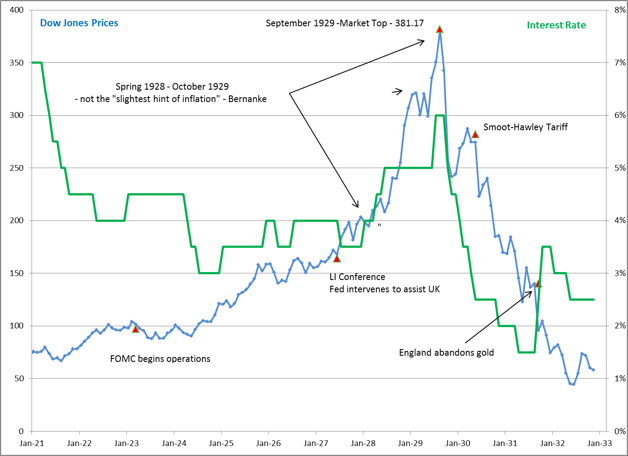 See the chart above and the period from spring 1928 to October 1929.  Note stock prices rising to the stratosphere.  (Stock prices are in blue and interest rates are in green.)  This is what Ben Bernanke means - foolishly it hardly needs to be added - when he says not the slightest hint of inflation.  As the chart makes clear, even with the benefit of hindsight Ben Bernanke completely misdiagnosed the 1920s stock bubble.  Ben Bernanke relies on an artificially narrow definition of inflation that is confined to consumer prices, and this makes him blind to inflation as measured by even huge increases in asset prices.  Stable consumer prices are no proof that credit is not being expanded too liberally or the risk of a financial bubble is low. Indeed, financial bubbles are most likely to occur when goods prices are relatively stable – the Great Depression and the Financial Crisis of 2008 provide ample evidence of this.  In his misdiagnosis of the 1920s stock bubble Ben Bernanke exposes exactly the same mindset that made him and the Federal Reserve blind to the enormous risks associated with the ballooning costs of homes in the early 2000s.

Here is Ben Bernanke in June 2004 – which was just two months after the housing bubble in terms of homeownership peaked – at a meeting of the FOMC imploring the Fed to take credit for the enormous benefits he believed accrued from the Fed’s policy of slashing rates;

“The economy has come a long way in the past year, and…we should pause to take some satisfaction in the Federal Reserve’s contribution to the turnaround.  Our policy actions, reinforced by innovations in our communications strategy, helped provide crucial support to the economy during a dangerous period.”

In June 2004 interest rates had been at 1% for one year and under 2% for approximately 30-months.  Over the previous several years, the Fed had embarked on a policy of unprecedented interest rate cuts in response to the tech stock bubble collapsing.  The interest rate cuts – along with the economic lunacy latent in Bill Clinton’s central plan for housing – fueled enormous increases in home prices.  Bernanke’s artificially narrow definition of inflation – which doesn’t account for asset prices – and his faith in the infallibility of central bankers made him blind to the enormous danger associated with what where clearly unsustainable increases in home prices.  The fact that Ben Bernanke wanted to take credit for the Fed slashing interest rates when the low rates ultimately caused enormous damage to the US and world economies proves – incontrovertibly – the enormous role the ignorance of Ben Bernanke and the Fed had in causing the 2008 financial crisis.  All the considerable damage done to the United States by the housing bubble is the direct result of the Fed, staffed by the supposedly smartest economists in the world, failing to understand the definition of a single word – inflation.

See Charles Evans (#20) for more information on the enormous increases in wealth disparity fueled by the Fed’s inflation.  For more information on the Fed’s efforts to support Great Britain during the 1920s, the 1927 Long Island conference of central bankers in particular, and thus fuel the 1920s stock bubble and help cause the Great Depression, see Alan Greenspan (#29).